Robots in the Work Place

Robots are taking over China's factory floors - Video - Technology. Hanging With the Robot Experts at SXSW Interactive 2016. It takes a lot to preserve your reputation over the course of centuries, much less geologic periods. 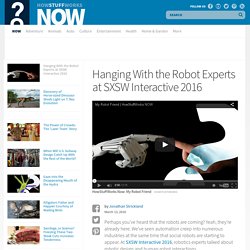 Now. No, the robots are not about to rise up and destroy us all. Hollywood loves to give us stories of super-intelligent robots running wild with their orders. 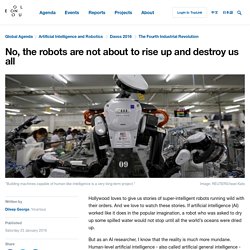 And we love to watch these stories. If artificial intelligence (AI) worked like it does in the popular imagination, a robot who was asked to dry up some spilled water would not stop until all the world’s oceans were dried up. But as an AI researcher, I know that the reality is much more mundane. Human-level artificial intelligence - also called artificial general intelligence - will be created slowly, over a long period of time. And it is very, very unlikely that a robot would ever be smart enough to devise a way to dry the world’s oceans without being smart enough to understand why that would be a problem. The apocalyptic AI scenarios the media portrays are a hyperbolic misrepresentation of actual risks. Siri, Watson and our reptile ancestors But smart-looking behavior is not the same as general intelligence. Only when these problems are both understood and solved will AI become possible. Share. Amazon shipping robots help prepare customer orders - Dec. 1, 2014. 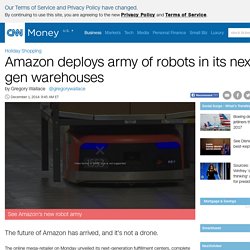 Back-end improvements may never be seen by customers, but will reduce the time between when an order is placed and when it arrives on a doorstep, Amazon said. It may also help prevent the kind of fiasco Amazon suffered last year when many orders weren't delivered in time for Christmas. The 10 higher-tech fulfillment centers will "increase speed of delivery while enabling greater local selection at lower costs for our customers," Amazon senior vice president Dave Clark said in a statement.

Related: Where to find Cyber Monday deals. RobotEnomics « Tracking the evolution of Robots. How Technology Is Destroying Jobs. Given his calm and reasoned academic demeanor, it is easy to miss just how provocative Erik Brynjolfsson’s contention really is. ­ 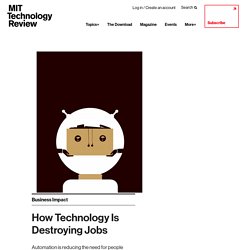 That robots, automation, and software can replace people might seem obvious to anyone who’s worked in automotive manufacturing or as a travel agent. Will humans be replaced by robots? They might take some of our jobs, but they'll also create new ones. Strange, semi-human, and capable of tapping into our fear of the unknown, robots have sent shivers down our spines for decades – long before the Terminator was sent to Earth or the daleks even contemplated exterminating Dr Who. 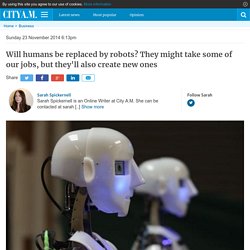 But now, the fictional threat of bloodthirsty machines has shifted to a much more real danger – that robots might come and steal our jobs. These are no monsters with an agenda of ending humankind. Instead, they represent a breed of relentless hard workers determined to outperform us. But perhaps we are just overreacting – in an interview with City A.M., robot expert professor Guy Hoffman from the School of Communication at IDC Herzliya, Israel, suggested that society may have blown the risk out of proportion: “Humans are smart, robots are dumb,” he explained, matter of factly. “There is the big question of what a robot can do that's actually useful beyond what we can do ourselves.” Robots threaten 15m UK jobs, says Bank of England's chief economist.

The Bank of England has warned that up to 15m jobs in Britain are at risk of being lost to an age of robots where increasingly sophisticated machines do work that was previously the preserve of humans. 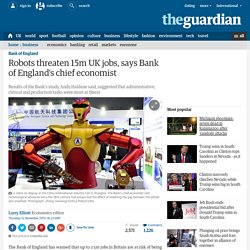 Andy Haldane, the bank’s chief economist, said automation posed a risk to almost half those employed in the UK and that a “third machine age” would hollow out the labour market, widening the gap between rich and poor. The results of a Bank of England study, Haldane added, suggested that administrative, clerical and production tasks were most at threat.

In a speech to the umbrella organisation for Britain’s trade unions, the TUC, he asked if the Luddites – reputed to have smashed machines during the Industrial Revolution – had been proved right two centuries on. Smarter robots put 50% of jobs at risk - Nov. 13, 2015. The Bank of England has warned that machines could take over 80 million American and 15 million British jobs over the next 10 to 20 years. 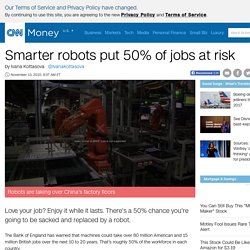 That's roughly 50% of the workforce in each country. As computers become more sophisticated, they are putting jobs previously thought of as "humans only" at risk of automation, the bank's chief economist Andy Haldane said. "These machines are different," Haldane said. "Unlike in the past, they have the potential to substitute for human brains as well as hands. " The central bank has highlighted administrative, clerical and production workers as the most at risk of being replaced.