How can I reduce energy use in my city? Smart energy solutions give citizens, businesses and local government the tools and systems they need to reduce their energy usage and costs. 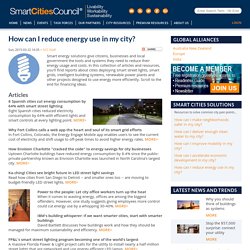 In this collection of articles and resources, you’ll find reports about cities deploying smart street lights, smart grids, intelligent building systems, renewable power plants and other projects designed to use energy more efficiently. Scroll to the end for financing ideas. Articles 8 Spanish cities cut energy consumption by 64% with smart street lighting Eight Spanish cities reduced electricity consumption by 64% with efficient lights and smart controls at every lighting point. MORE> Home - Customer Engagement Platform For Utilities. How Utilities Are Using Blockchain to Modernize the Grid. Executive Summary Blockchain has grabbed the attention of the heavily regulated power industry as it braces for an energy revolution in which both utilities and consumers will produce and sell electricity. 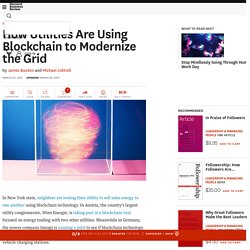 This coming shift is prompting the industry to focus on blockchain’s potential to make peer-to-peer energy trading a reality. If the technology proves to be reliable and scalable, it may ultimately accelerate the transition to what the energy industry calls a “distributed world” made up of both large and smaller power-generation systems for homes, businesses, and communities. While there’s room for startups to move in and disrupt this industry, established utilities are best placed to evaluate and make strategic bets on blockchain technology’s potential applications. If they can seize the moment, centralized incumbents may turn out to be the true disruptors, ushering in a new era of decentralized power. Energy & Climate - Sandia National Laboratories. The Ministry of Energy and Water Resources begins project to replace wasteful electrical Water heating tanks - Ministry of National Infrastructures, Energy and Water Resources.

Minister of Energy and Water Resources, Silvan Shalom: “The Ministry’s consumer perspective is reflected in several campaigns conducted in recent years, as in the replacement of about 15,000 electrical water heating tanks that waste energy and consume large amounts of electricity … We will do everything from a genuine public perspective that looks at what is good for the energy economy, the State of Israel and the consumer. 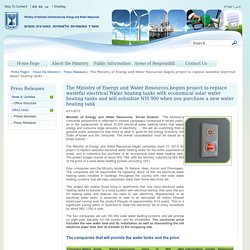 The overall consideration must be based on a broad outlook.” The Ministry of Energy and Water Resources began yesterday (April 21, 2013) its project to replace wasteful electrical water heating tanks for the entire population of Israel, and to subsidize the purchase of an economical solar water heating tank. The project budget stands at about NIS 13M, with the Ministry subsidizing NIS 900 of the price of a solar water heating system (including VAT). Four companies won the Ministry tender, Or Hateva, Ideal, Amcor and Chromagen. The Energy Conservation Division - Ministry of National Infrastructures, Energy and Water Resources. 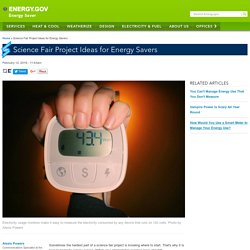 That's why it is best to begin by simply asking, "What am I interested in learning more about? " If you are curious about energy, electricity, and the environment, we've got some great ideas for you. Federal Energy Regulatory Commission. International Energy Agency. Israeli Smart Grid Consortium. Powercom Website. Are we about to throw away $25 trillion in waste? The average car lies idle for 90% of the day. 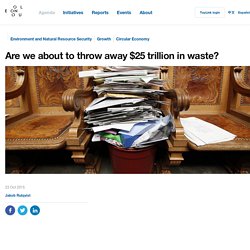 The average power drill is used for 30 minutes of its entire life. Landfill dumps are full. It is widely recognized that wasteful exploitation of the world’s resources is taking its toll on the environment, but it is less appreciated that the rate and nature of our consumption is choking economic growth. As much as $25 trillion could be at stake by 2050 unless we change the relationship between natural resources, customers and the market. Thanks to radical new business models and technologies, some companies are now growing by finding value in resources, assets and products that have, until now, been vastly underutilised. For forty years until the turn of the millennium, business got used to commodity prices decreasing as growth surged. As a result of wasteful practices, prices for metals like copper, iron, tin and nickel, have nearly doubled between 2000 and 2015.

What’s the difference between a circular and a linear economy? 1 mm. This post is by Dustin Benton, who leads Green Alliance’s Resource Stewardship theme. 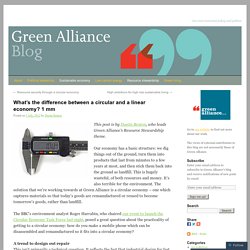 Our economy has a basic structure: we dig things out of the ground, turn them into products that last from minutes to a few years at most, and then stick them back into the ground as landfill. This is hugely wasteful, of both resources and money. It’s also terrible for the environment. The solution that we’re working towards at Green Alliance is a circular economy – one which captures materials so that today’s goods are remanufactured or reused to become tomorrow’s goods, rather than landfill. The BBC’s environment analyst Roger Harrabin, who chaired our event to launch the Circular Economy Task Force last night, posed a great question about the practicality of getting to a circular economy: how do you make a mobile phone which can be disassembled and remanufactured so it fits into a circular economy? A trend to design out repair This isn’t primarily a technical question. “One millimeter.

Like this: Tendril - Changing the way the world uses energy. Waste and Efficiency Planning and Implementation. With growing populations and increasing impacts from climate change, forward-thinking cities are scrambling to adopt green infrastructure to become more resilient. 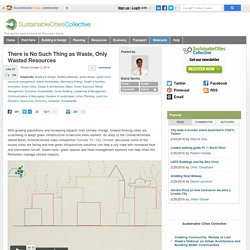 Visionary water utilities are beginning to recognize the tremendous amount of valuable resources that lie in city wastewater. In contrast, a process known as bio-digestion considerably lowers a city’s carbon footprint. Rather than focus on maintaining their license to operate by meeting the U.S. Connect: Overview - Digital Grid. California Regulators Take Bold Steps Toward a New Energy Efficiency Paradigm. California has always been at the forefront of efforts to accelerate clean-energy innovation and address climate change. 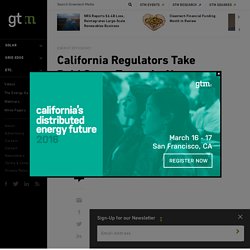 This past Friday, the state took another giant leap by updating several obscure but important regulations that were inadvertently hindering progress in energy efficiency. Energy Management Solutions. NEAR ZERO STREET LIGHTING ENERGY COSTS. Nowadays, everyone is looking for alternative energy solutions and solar power is one of the most utilized. 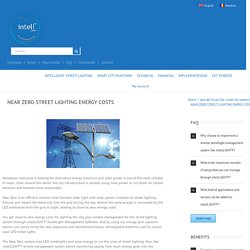 In major cities around the world, the city infrastructure is already using solar power to cut down on carbon emission and become more sustainable. Near Zero is an efficient solution that harvests solar light with solar panels installed on street lighting fixtures and injects the electricity into the grid during the day. The World Economic Forum. Top 10 Emerging Urban Innovations report 2010 20.10.