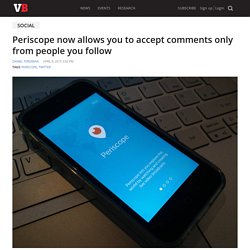 Register today for a live virtual online roundtable discussion.] Twitter today pushed an update to Periscope, its livestreaming mobile app, that lets broadcasters allow comments only from people they follow. The new “follower only” mode is “available before starting your broadcast,” Twitter said in its app update. “If you turn this on, only viewers that you follow can comment in your broadcast.” At the same time, it is now easier to block commenters. Other new features in today’s update include a new “global” section which “lists the most recent, live broadcasts from around the world.” Tales from a Very Busy Teacher: Periscope Tips and Tricks {for the classroom} 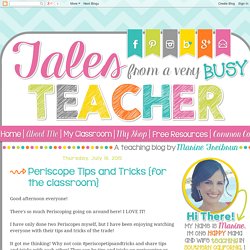 There's so much Periscoping going on around here! I LOVE IT! I have only done two Periscopes myself, but I have been enjoying watching everyone with their tips and tricks of the trade! Teach Happy, Live Happy, Be Happy. Like we needed another social media app to get addicted too. 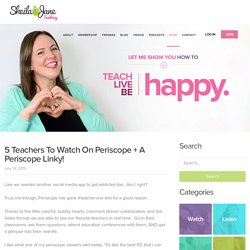 Am I right? Trust me though; Periscope has gone #teacherviral and for a good reason. Thanks to the little colorful, bubbly hearts, comment stream collaboration, and live video format; we are able to see our favorite teachers in real time. Go in their classrooms, ask them questions, attend education conferences with them, AND get a glimpse into their real life. Periscope, Meerkat and the Journalism of Now. Every semester I like to watch trends in digital media for an assignment I construct for the last month of class. 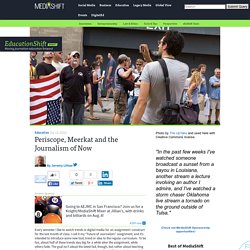 I call it my “Future of Journalism” assignment, and it’s intended to introduce some new tool, trend or idea to the regular curriculum. To be fair, about half of these trends stay big for a while after the assignment, while others fade. The goal isn’t about the latest fad, though, but rather about teaching them how to see what is emerging and think about how it fits into their journalistic work. 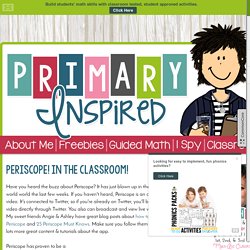 It has just blown up in the teaching & blogging world world the last few weeks. Untitled. 5 ideas for using @Periscope app in your school - The Periscope app was introduced to me by @fionajharvey at #SotonTEL. 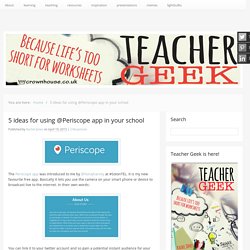 It is my new favourite free app. Basically it lets you use the camera on your smart phone or device to broadcast live to the internet. In their own words: You can link it to your twitter account and so gain a potential instant audience for your broadcast. This has massive potential for educational use, and I am really excited about using it in my classroom this coming term. 1- You could broadcast part of a lesson live. 2- Sharing the work of special interest groups in school. 3- Many schools now use a Twitter hashtag for school trips. Periscope Tutorial: How Use Twitter's Periscope. Hands on with Twitter Periscope, the presumptive Meerkat killer. Twitter live video broadcasting is a squall inside an ocean of social media activity, and bobbing frantically in the middle of it like a shiny buoy is Meerkat, the little video-streaming app that could. 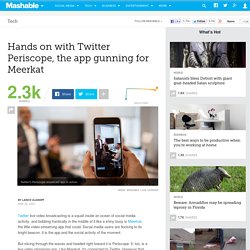 Social media users are flocking to its bright beacon. It is the app and the social activity of the moment. A Beginners Guide To Periscope - Part 1. Last month we talked about Meerkat and Periscope (twitter’s own live video streaming app) which launched recently and are the new frontiers in video marketing. 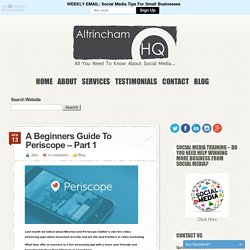 What they offer in essence is a live streaming app with a more user-friendly and engaging interface than UStream or Livestream If you want to read about the benefits of both look at our blog here on Meerkat, Periscope and Live Streaming (but bare in mind it’s 3 weeks since Periscope launched and updates are happening all the time) In our latest blog we want to talk about Periscope and offer a Beginners Guide To Periscope 1. FOLLOW A WIDE VARIETY OF PEOPLE Can you remember when you 1st signed up to Twitter and you followed a handful of people and thought “what’s the point of twitter” Then you followed a few hundred more and realised that twitter becomes more useful and varied when you’ve followed a number of people 1. 2.

A Dozen Cool Ways to Use Periscope in Your Class. Periscope is a fairly new app (and web site) connected to Twitter. 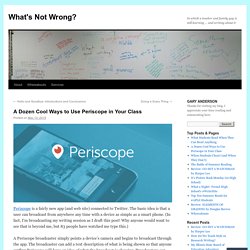 The basic idea is that a user can broadcast from anywhere any time with a device as simple as a smart phone. (In fact, I’m broadcasting my writing session as I draft this post! Why anyone would want to see that is beyond me, but 83 people have watched me type this.) A Periscope broadcaster simply points a device’s camera and begins to broadcast through the app. The broadcaster can add a text description of what is being shown so that anyone surfing Periscope will have an idea of what the broadcast is showing. Those who are watching a Periscope broadcast can interact with the broadcaster in several ways beyond simply looking at the streaming video.

A dialogue can emerge if a broadcaster responds out loud to the comments through the broadcasting device’s microphone, or if the commenters begin to comment on each other’s observations. As with any tech tool, there are advantages and disadvantages. 1. 2. 3. 4. 6. 7. 8. 9. 12. Periscope For Awesome Classroom Sharing - Work in Progress.