Free Scripts Catalog - Readers Theater All Year. ...Keep doing what you are doing. 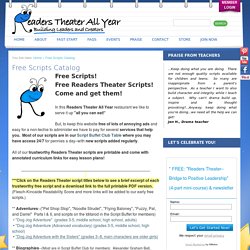 There are not enough quality scripts available for children and teens. So many are inappropriate from a parent's perspective. As a teacher I want to also build character and integrity while I teach a subject. Why can't drama build up, inspire and be thought provoking?... Anyway, keep doing what you're doing...we need all the help we can get! > ...I have been teaching for 35 years. Readers Theater All Year is the most comprehensive collection of Readers Theater scripts and resources I have found on the internet!... I found the free readers theater online scripts, teaching tips, and curriculum teleseminars at Readers Theater All Year very inspirational to me. "> ..We did Squanto's Squash for the family on Thanksgiving and [my sons] participated and loved it. > ...re: our script "The Earth Day Hen and Friends" I've used this!

RTscripts - Dr. Chase Young. 122. Robin Hood and the Widow's Three Sons. Quiller-Couch, Arthur, ed. 1910. The Oxford Book of Ballads. King Arthur and His Knights by Maude Radford Warren. [11] ONCE upon a time, a thousand years before Columbus discovered America, and when Rome was still the greatest city in the world, there lived a brave and beautiful youth whose name was Arthur. 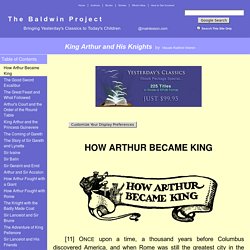 His home was in England, near London; and he lived with the good knight Sir Hector, whom he always called father. They dwelt in a great square castle of gray stone, with a round tower at each corner. Readers Theatre for Middle School Boys: Investigating the Strange and Mysterious - Ann N. Black. Rdrs-Theatre.pdf. RTE #38 ~ Captain Cully (The Last Unicorn, Peter Beagle) Adapted for reader’s theater (or readers theatre) by Aaron Shepard, from Peter S. 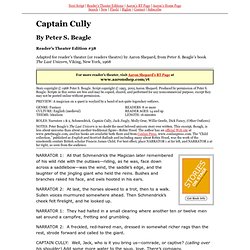 Beagle’s book The Last Unicorn, Viking, New York, 1968 NARRATOR 1: All that Schmendrick the Magician later remembered of his wild ride with the outlaws—riding, as he was, face down across a saddlebow—was the wind, the saddle’s edge, and the laughter of the jingling giant who held the reins. Bushes and branches raked his face, and owls hooted in his ears. NARRATOR 2: At last, the horses slowed to a trot, then to a walk. Sullen voices murmured somewhere ahead. NARRATOR 1: They had halted in a small clearing where another ten or twelve men sat around a campfire, fretting and grumbling. NARRATOR 2: A freckled, red-haired man, dressed in somewhat richer rags than the rest, strode forward and called to the giant. RTE #14 ~ The Sea King's Daughter. Adapted for reader’s theater (or readers theatre) by the author, from his picture book published by Atheneum, New York, 1997, and reprinted by Skyhook Press, Friday Harbor, Washington, 2011 NARRATOR 1: Long ago, in the river port city called Novgorod the Great, there lived a young musician named Sadko. 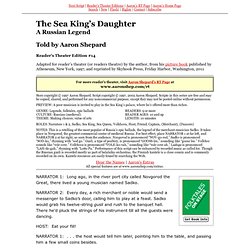 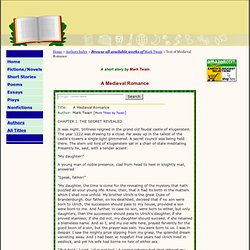 Stillness reigned in the grand old feudal castle of Klugenstein. The year 1222 was drawing to a close. Far away up in the tallest of the castle's towers a single light glimmered. A secret council was being held there. "My daughter! " A young man of noble presence, clad from head to heel in knightly mail, answered: "Speak, father! " "My daughter, the time is come for the revealing of the mystery that hath puzzled all your young life.

"'But hold,' I said, 'all is not lost.' "When you were ten years old, a daughter was born to Ulrich. "Now it hath come to pass that age hath laid its hand upon my brother, and he waxes feeble. "Now listen well. RTE #17 ~ Count Alaric's Lady (Barbara Leonie Picard) Adapted for reader’s theater (or readers theatre) by Aaron Shepard, from the story published in the book Selected Fairy Tales, by Barbara Leonie Picard, Oxford University Press, Oxford, 1994 NARRATOR 1: Early in the morning of one Midsummer Day, young Count Alaric rode out of his castle alone. 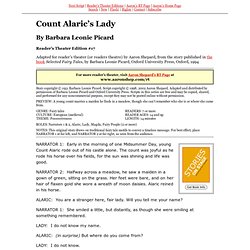 The count was joyful as he rode his horse over his fields, for the sun was shining and life was good. NARRATOR 2: Halfway across a meadow, he saw a maiden in a gown of green, sitting on the grass. Her feet were bare, and on her hair of flaxen gold she wore a wreath of moon daisies.