How to make your daily commute bearable, if not downright pleasant. Solar Impulse craft inspires solar train for Indian Railways. India may soon be able showcase to the world a solar train, which uses a mix of thermal power and solar energy generated from panels on its roof. 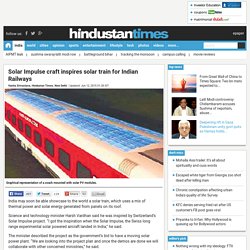 Science and technology minister Harsh Vardhan said he was inspired by Switzerland’s Solar Impulse project. “I got the inspiration when the Solar Impulse, the Swiss long range experimental solar powered aircraft landed in India,” he said. The minister described the project as the government’s bid to have a moving solar power plant. “We are looking into the project plan and once the demos are done we will collaborate with other concerned ministries,” he said. Solar powered trains - Indian Railways begins trials of solar powered trains. France to force big supermarkets to give away unsold food to charity. French supermarkets will be banned from throwing away or destroying unsold food and must instead donate it to charities or for animal feed, under a law set to crack down on food waste. 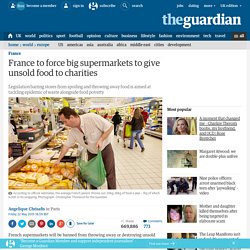 The French national assembly voted unanimously to pass the legislation as France battles an epidemic of wasted food that has highlighted the divide between giant food firms and people who are struggling to eat. As MPs united in a rare cross-party consensus, the centre-right deputy Yves Jégo told parliament: “There’s an absolute urgency – charities are desperate for food. The most moving part of this law is that it opens us up to others who are suffering.” Supermarkets will be barred from deliberately spoiling unsold food so it cannot be eaten. Those with a footprint of 4,305 sq ft (400 sq m) or more will have to sign contracts with charities by July next year or face penalties including fines of up to €75,000 (£53,000) or two years in jail.

How Amsterdam became the bicycle capital of the world. Anyone who has ever tried to make their way through the centre of Amsterdam in a car knows it: the city is owned by cyclists. 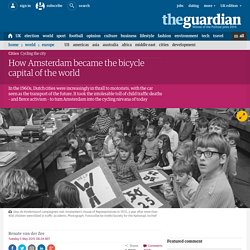 They hurry in swarms through the streets, unbothered by traffic rules, taking precedence whenever they want, rendering motorists powerless by their sheer numbers. Cyclists rule in Amsterdam and great pains have been taken to accommodate them: the city is equipped with an elaborate network of cycle-paths and lanes, so safe and comfortable that even toddlers and elderly people use bikes as the easiest mode of transport. It’s not only Amsterdam which boasts a network of cycle-paths, of course; you’ll find them in all Dutch cities. The Dutch take this for granted; they even tend to believe these cycle-paths have existed since the beginning of time. 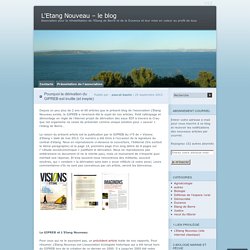 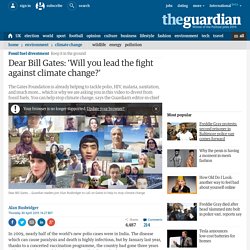 The disease which can cause paralysis and death is highly infectious, but by January last year, thanks to a concerted vaccination programme, the country had gone three years without a single case of the virus. It was officially “polio-free”. This immense achievement involved many people, including 2 million vaccinators fanning out across the vast country, but was due in no small part to the determination of the Bill and Melinda Gates Foundation, whose resources helped make those vaccinations possible. Keep it in the ground: Guardian climate change campaign.

Tidal energy: Swansea project 'could lead to 70,000 jobs' The company behind the world’s first tidal energy scheme at Swansea Bay in south Wales hopes to create 70,000 jobs in the construction phase alone, if it can roll the programme out to five other, larger schemes at a total cost of £30bn. 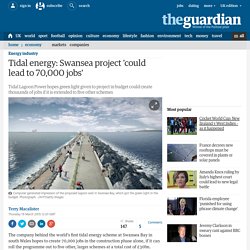 Tidal Lagoon Power, which received the green light in the budget to start talks with the government on subsidies, wants the £1bn Swansea project to be the start of a “game-changing” industry. Rooftops on new buildings built in commercial zones in France must either be partially covered in plants or solar panels, under a law approved on Thursday. 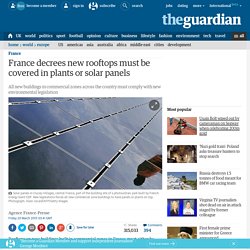 Green roofs have an isolating effect, helping reduce the amount of energy needed to heat a building in winter and cool it in summer. They also retain rainwater, thus helping reduce problems with runoff, while favouring biodiversity and giving birds a place to nest in the urban jungle, ecologists say. France decrees new rooftops must be covered in plants or solar panels. Solar Impulse 2.