You're Being Watched Online. CEOP. Sexting: what you should know. Computer & mobile phone use. The history of technology in education. Sexting scare: 6 sexting myths busted. It seems incredible that teens, even 17-year-olds who can legally have sex, could end up on a register for sexting.

Of course, it’s important that young people understand the serious implications sexting could have, but criminalising the craze seems like a step too far. Instead of frightening teens into ditching their naked selfies, wouldn't it be better to educate them? But with sex education lessons still in need of a 21st century revamp, it looks like that’s not going to happen anytime soon. So, we’ve done it for you – compiling the legal, very real, consequences of sending that sext. Sarah Bazaraa, a solicitor at Pannone Corporate, talks me through the civil legal issues that being involved in sexting could lead to. 1) You could end up with a police caution Sending a naked image of yourself via text message, or social media, when you’re below the age of 18 is technically illegal.

President Obama Speaks on Technology in Schools. Microsoft Vision of the Classroom of the Future. Technology in Education: A Future Classroom. Facebook's drone Aquila project tries to bring internet to the rest of the world. Why leaving Facebook has made me happier. According to new research this week, by the Happiness Research Institute in Copenhagen, giving up Facebook for even just seven days boosts happiness and reduces anger and feelings of loneliness. 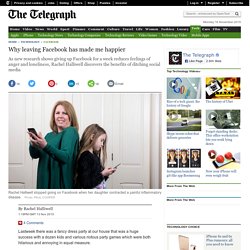 I can’t remember the last time my nine-year-old pleaded with me to get off my phone, or accused me of loving my mobile more than I do her The report suggests that Facebook distorts our perception of reality – we buy in to the oh-so-fabulous commentary on other people’s lives to such an extent that we can’t help but evaluate our own less than perfect lives as being inadequate. These findings don’t come as a surprise to me. I used to love Facebook, but almost a year ago the crappiness of real life pulled me away when our youngest daughter, aged nine, was taken ill with a painful form of inflammatory disease and we had a terrible and protracted time getting a diagnosis. Now, she’s on the mend and life is enjoyable again. Facebook's Mark Zuckerberg to give away 99% of shares. Image copyright Getty Images Facebook's Mark Zuckerberg and his wife Priscilla Chan say they will give away 99% of their shares in the company to good causes as they announce the birth of their daughter Max. 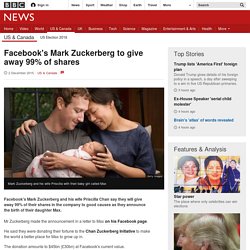 Mr Zuckerberg made the announcement in a letter to Max on his Facebook page. He said they were donating their fortune to the Chan Zuckerberg Initiative to make the world a better place for Max to grow up in. The donation amounts to $45bn (£30bn) at Facebook's current value. However the shares will not be donated to charity immediately, but over the course of the couple's lives. Were Mr Zuckerberg to give away 99% of his shares immediately, he would still possess hundreds of millions of dollars. Max was born last week, although her birth was only made public on Tuesday. In his letter Mr Zuckerberg said the aim of the Chan Zuckerberg Initiative is "to advance human potential and promote equality for all children in the next generation".

Should you be allowed to use a phone in the cinema? Image copyright Alamy A proposal by a US cinema chain to let customers use their phones during some film screenings unleashed such a powerful blast of outrage that the company quickly reversed it. 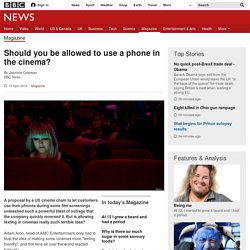 But is allowing texting in cinemas really such terrible idea? Adam Aron, head of AMC Entertainment, only had to float the idea of making some cinemas more "texting friendly", and film fans all over the world reacted furiously. "Worst idea ever," was the conclusion of many people on social media. "You're basically pandering to rude people just to make money," said one person on Twitter. Just two days after Aron's interview was published, the company was forced to withdraw the idea.

"There will be no texting allowed in any of the auditoriums at AMC Theatres," it said in a statement. Virtual burglary: 'I fell for it and I paid' Utah High School Football Coach Suspends Entire Team for Cutting Classes, Cyberbullying. Edward Snowden: Here's how we take back the Internet. Instagram hacked by 10-year-old boy. Image copyright Getty Images A 10-year-old Finnish boy named Jani has been given $10,000 (£7,000) after he found a security flaw in image-sharing social network Instagram. 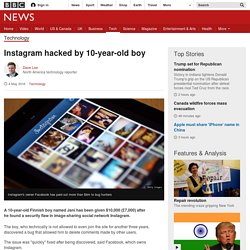 The boy, who technically is not allowed to even join the site for another three years, discovered a bug that allowed him to delete comments made by other users.