Finland considers basic income to reform welfare system - BBC News. The Finnish government is considering a pilot project that would see the state pay people a basic income regardless of whether they work. 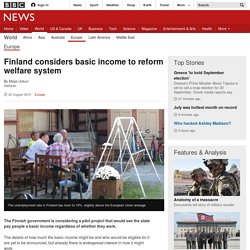 The details of how much the basic income might be and who would be eligible for it are yet to be announced, but already there is widespread interest in how it might work. Prime Minister Juha Sipila has praised the idea. "For me, a basic income means simplifying the social security system," he said. The scheme is of particular interest to people without jobs. Parody and Pastiche. Is the left's big new idea a 'right to be lazy'? Image copyright iStock Why are so many on the left now arguing that the state should pay everyone a universal basic income? 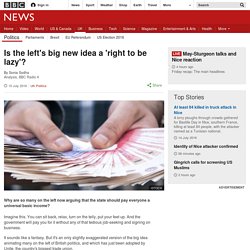 Imagine this. You can sit back, relax, turn on the telly, put your feet up. And the government will pay you for it without any of that tedious job-seeking and signing on business. BBC Radio 4 - Analysis, Money for Nothing. Think tank floats 'basic income' idea for all citizens. Image copyright Getty Images A think tank is calling for fundamental change to the system of tax and benefits in the UK. 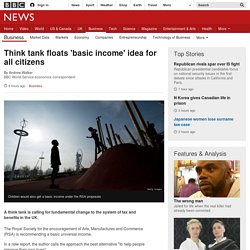