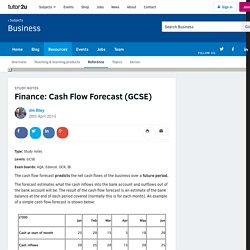 The forecast estimates what the cash inflows into the bank account and outflows out of the bank account will be. The result of the cash flow forecast is an estimate of the bank balance at the end of each period covered (normally this is for each month). An example of a simple cash flow forecast is shown below: A business uses a cash flow forecast to: Identify potential shortfalls in cash balances – for example, if the forecast shows a negative cash balance then the business needs to ensure it has a sufficient bank overdraft facilitySee whether the trading performance of the business (revenues, costs and profits) turns into cash.Analyse whether the business is achieving the financial objectives set out in the business plan (which will almost certainly include some kind of cash flow budget)

3.1.1 Enterprise: Adding Value. 3.1 Understanding Mission Aims & Objectives. 3.1.1 Nike's Profits Bounce Back. 3.1.2 Which is the bigger business - Ford or Tesla? Market Capitalisation. 3.1.2 Tesco face the power of Shareholders over Booker. 3.1.2 Business Organisation: Introduction to Business Ownership. There are three options for a business' legal structure: (1) Sole Trader An individual who runs an unincorporated business on his or her own. Sometimes otherwise known as a "sole proprietor" or (in the case of professional services) a"sole practitioner". The sole trader structure is the most straight-forward option. The individual is taxed under the Inland Revenue's Self-Assessment system, with income tax calculated after deduction for legitimate business expenses and personal allowances. . (2) Partnership A partnership is an association of two or more people formed for the purpose of carrying on a business. Partner liability can take several forms. The operation of a partnership is usually governed by a "Partnership Agreement" . (3) Incorporated Company Incorporating business activities into a company confers life on the business as a "separate legal person".

There are four main types of company: (3) Private unlimited company - there is no limit to the members' liability. 3.1.2 Forms of Business. 3.1.2 Shareholders and Incorporated Businesses. 3.1.2 The clock is ticking for Spotify. Image copyright Reuters It's amazing to think that just 10 years ago, flat-rate digital music streaming services were a mere gleam in the eye of industry executives. 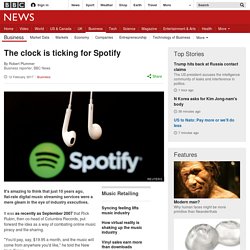 It was as recently as September 2007 that Rick Rubin, then co-head of Columbia Records, put forward the idea as a way of combating online music piracy and file-sharing. "You'd pay, say, $19.95 a month, and the music will come from anywhere you'd like," he told the New York Times. "In this new world, there will be a virtual library that will be accessible from your car, from your cell phone, from your computer, from your television. " As it turned out, he was essentially describing Spotify, which launched just over a year later. He even got the price right. But Spotify is yet to make a profit, while plans to float the firm on the stock market have reportedly been delayed, raising a big question mark over its business model. Industry accolade Of course, Spotify isn't the only streaming platform out there. Image copyright AFP. 3.1.3 McDonalds and the External Environment. Back in November 2015 we asked Can McDonalds Succeed with Premium Burgers? 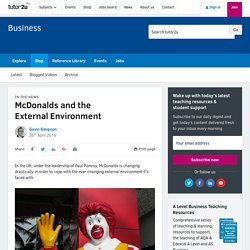 Here we take a look at how else McDonalds are tackling their slow decline to keep up with competitors in our ever changing environment. Talking to the Guardian's Graham Ruddick, Pomroy explains the challenges McDonalds are faced with and how they are trying to overcome them. Politics and Economics We can see that, like many businesses, McDonalds are dealing with the introduction of the national living wage and the controversy of zero-hours contracts. These are large cost factors – but they may not be as significant as first feared for a company like McDonalds.

It's also interesting to note that when workers have been offered fixed contracts, rather than zero hours, 80% of staff did not take up the offer. Tax McDonalds are also faced with tax concerns and are currently being investigated by the European Commission. Ethics Technology These have all been used to attract customers and boost revenue: Another perspective. 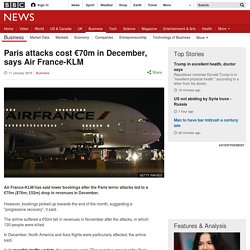 However, bookings picked up towards the end of the month, suggesting a "progressive recovery", it said. The airline suffered a €50m fall in revenues in November after the attacks, in which 130 people were killed. In December, North America and Asia flights were particularly affected, the airline said. In its monthly traffic update, the company said: "The negative impact of the Paris attacks on December revenues is estimated to be around €70m, with significant easing during the last two weeks. "Booking trends in December were in line with a progressive recovery. " Passenger numbers on Air France, KLM, and HOP! But once Dutch budget airline Transavia was included, total passenger numbers were "stable" at 6.7 million. 3.1.3 PESTLE - How Businesses Can Handle Political Risks.