In this unit, we will explore a number of Master Texts. These examples will allow us to figure out what techniques are common in Flash Fiction, so we can write our own stories (Batchelor & King, 2014).

“I’m sure some of you had a hard time convincing your parents or guardians to let you take this class because it’s not practical,” I said, recalling my own parents’ entreaties for my high-school incarnation to be more practical. “But you’ll use the skills you learn in flash fiction throughout your lives. You’ll use them to write college essays, or academic papers, and later when you write memos at work. You’ll use them to write love letters or notes to your sick grandmother. Good writing skills open doors.”

But my explanations felt incomplete. They didn’t describe what fascinates me about flash: The tension between what is said and unsaid, and the stunning language that emerges from the form’s roots in ancient fables and its kinship to poetry. These are flash’s ineffable qualities that the students must be shown, not told. The first step in that process was creating a reading list with representation from different genres, writers from diverse backgrounds, and various styles. 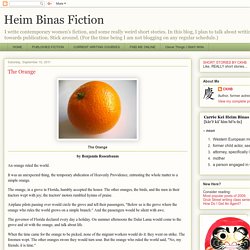 It was an unexpected thing, the temporary abdication of Heavenly Providence, entrusting the whole matter to a simple orange. The orange, in a grove in Florida, humbly accepted the honor. The other oranges, the birds, and the men in their tractors wept with joy; the tractors' motors rumbled hymns of praise. Airplane pilots passing over would circle the grove and tell their passengers, "Below us is the grove where the orange who rules the world grows on a simple branch. " The governor of Florida declared every day a holiday.

When the time came for the orange to be picked, none of the migrant workers would do it: they went on strike. Finally a man from Chicago, with a heart as windy and cold as Lake Michigan in wintertime, was brought in. I bought the orange who ruled the world for 39 cents at Safeway three days ago, and for three days he sat in my fruit basket and was my teacher. Now we are on our own again. Copyright © 2001 Benjamin Rosenbaum. Best Animated Short, SXSW 2010. How To Set A House On Fire. Because my last post, The Orange by Benjamin Rosenbaum, got more hits in twelve days than any of my other posts have EVER gotten (I'm not hurt, no, not at all)... here's another short story that I love. 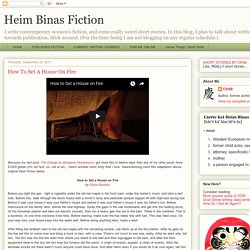 Award-winning short film adaptation above, original flash fiction below. How to Set a House on Fire Before you light the gas , light a cigarette under the old red maple in the front yard, under the hunter’s moon, and take a last look. Before this, walk through the ranch house with a miner’s lamp and pesticide sprayer topped off with high-test racing fuel. Before it was your house it was your father’s house and before it was your father’s house it was his father’s too.

After filling the birdbath next to the old red maple with the remaining octane, call Herm up at the fire station. Kelly A. Harrison. Raymond Carver. Earnest Hemingway. Hannah Bottomy Voksuil. What Happened During the Ice Storm. Naomi Shihab Nye. Dave Eggers. You all get out of your cars. 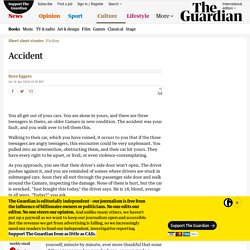 You are alone in yours, and there are three teenagers in theirs, an older Camaro in new condition. The accident was your fault, and you walk over to tell them this. Walking to their car, which you have ruined, it occurs to you that if the three teenagers are angry teenagers, this encounter could be very unpleasant. You pulled into an intersection, obstructing them, and their car hit yours. They have every right to be upset, or livid, or even violence-contemplating. As you approach, you see that their driver's side door won't open. Katharine Weber. Sleeping By Katharine Weber She would not have to change a diaper, they said. 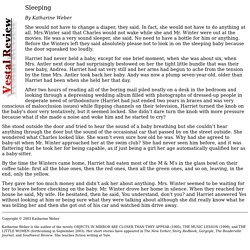 In fact, she would not have to do anything at all. Mrs.Winter said that Charles would not wake while she and Mr. Winter were out at the movies. Sunday at the Zoo.