Tiger Hunting - Tiger Facts and Information. Tiger hunting is considered by a few, a very exciting challenge that many are up to taking. 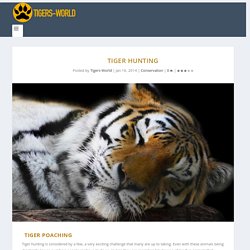 Even with these animals being drastically low in numbers people continue to do so. Illegal Tiger Trade: Why Tigers Are Walking Gold. Talking Tigers: Part 2 of a 12-part series In December 2013 at the Tadoba Tiger Reserve in India, we finally got the word: Three confiscated steel-jawed poacher’s traps would be brought to the Forest Department office at one o’clock, and we’d been granted permission to film them. 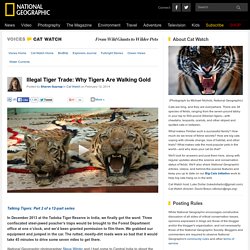 We grabbed our equipment and jumped in the car. The rutted, mostly-dirt roads were so bad that it would take 45 minutes to drive some seven miles to get there. National Geographic photographer Steve Winter and I had come to Central India to shoot the short video above, Battling India’s Illegal Tiger Trade, on one of the most devastating threats facing the world’s last 3,000 wild tigers: poaching. Tigers are walking gold, worth a fortune on the black market. The bones are smuggled almost exclusively to China, used in tiger bone wine—a pricey traditional Chinese medicine (TCM) tonic thought to impart the tiger’s great strength and vigor.

It’s rarely poor locals that are poaching tigers—it’s organized gangs. Trade In Tiger Parts. The single greatest threat of extinction that looms over most Asian wildlife especially the endangered tiger, and pushes them to become endangered species, are the massive demands for traditional medicine. 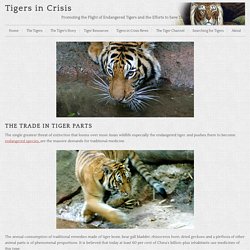 The annual consumption of traditional remedies made of tiger bone, bear gall bladder, rhinoceros horn, dried geckoes and a plethora of other animal parts is of phenomenal proportions. It is believed that today at least 60 per cent of China’s billion-plus inhabitants use medicines of this type. The booming economies and personal incomes of Southeast Asia have caused demand and prices to soar, lifting the international trade in wildlife products to an estimated $6 billion-a-year business.

Why is there this demand? Protect Tiger Habitat. Most conservationists agree that strong protection of wildlife reserves has been the key to the endangered tiger’s survival so far. 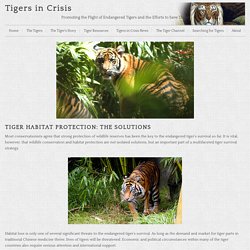 It is vital, however, that wildlife conservation and habitat protection are not isolated solutions, but an important part of a multifaceted tiger survival strategy. Habitat loss is only one of several significant threats to the endangered tiger’s survival. As long as the demand and market for tiger parts in traditional Chinese medicine thrive, lives of tigers will be threatened. Economic and political circumstances within many of the tiger countries also require serious attention and international support. History. India's Tigers May Be Rebounding, in Rare Success for Endangered Species. More money has been spent on tiger conservation than on preserving any other species in the world, yet wildlife biologists have been seemingly unable to stop the decline of the iconic big cat in the face of poaching and habitat loss. 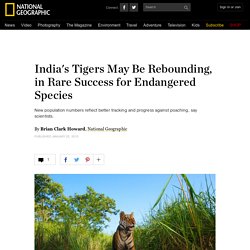 That appeared to change Tuesday, when the government of India—the country is home to most of the world's wild tigers—announced preliminary results of the latest tiger census that reveal a surge in the number of the big cats in its preserves over the past seven years. India's environment minister, Prakash Javadekar, announced that its scientists had counted 2,226 wild tigers in the country, up from 1,411 seven years ago, a rise of nearly 58 percent.

Tigers Endangered - Tiger Facts and Information. There are quite a few threats out there that continue to put the future for the tiger at risk. 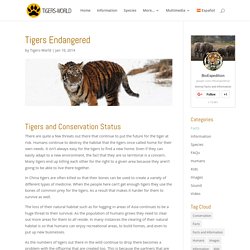 Humans continue to destroy the habitat that the tigers once called home for their own needs. It isn’t always easy for the tigers to find a new home. Even if they can easily adapt to a new environment, the fact that they are so territorial is a concern. Save Tigers in the Wild. You would assume it is easier to get a glimpse of a tiger in a forest, but that is not where I saw my first wild tiger. 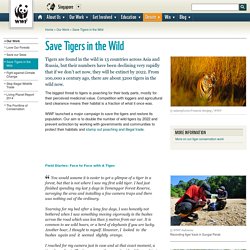 I had just finished spending my last 5 days in Temenggor Forest Reserve, surveying the area and installing a few camera traps and there was nothing out of the ordinary.Yearning for my bed after a long few days, I was honestly not bothered when I saw something moving vigorously in the bushes across the road which was less than 5 metres from our car. It is common to see wild boars, or a herd of elephants if you are lucky. Another boar, I thought to myself. However, I looked to the bushes again and it seemed slightly orange.I reached for my camera just in case and at that exact moment, a tiger leaped out. Endangered Tiger Status. Tiger. The largest of all the Asian big cats, tigers rely primarily on sight and sound rather than smell. 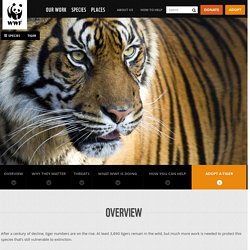 They typically hunt alone and stalk prey. A tiger can consume up to 88 pounds of meat at one time. On average, tigers give birth to two or three cubs every two years. If all the cubs in one litter die, a second litter may be produced within five months. Tigers generally gain independence at two years of age and attain sexual maturity at age three or four for females and at four or five years for males.

Save the tiger: Poaching facts. 1. 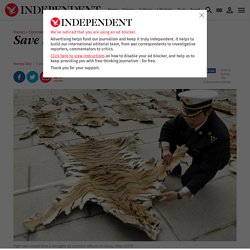 Poaching is one of the most immediate threats to wild tigers. In relentless demand, their parts are used for traditional medicine, folk remedies, and increasingly as a status symbol among some Asian cultures. 2. Tigers are also illegally killed or poached because their pelts are valuable on the black market. 3. 4.