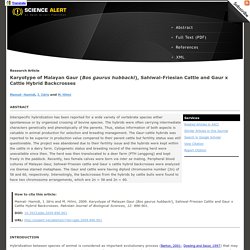 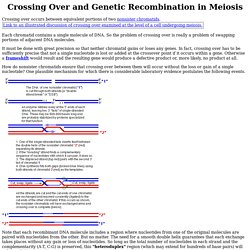 Each chromatid contains a single molecule of DNA. So the problem of crossing over is really a problem of swapping portions of adjacent DNA molecules. It must be done with great precision so that neither chromatid gains or loses any genes. In fact, crossing over has to be sufficiently precise that not a single nucleotide is lost or added at the crossover point if it occurs within a gene. Otherwise a frameshift would result and the resulting gene would produce a defective product or, more likely, no product at all. How do nonsister chromatids ensure that crossing over between them will occur without the loss or gain of a single nucleotide? Note that each recombinant DNA molecule includes a region where nucleotides from one of the original molecules are paired with nucleotides from the other. Why should the cutting and ligation be limited to the strands shown? Investigating mitosis in allium root tip squash.

Talking about what chromosomes do during mitosis could be very interesting, but seeing them for yourself adds an extra dimension. 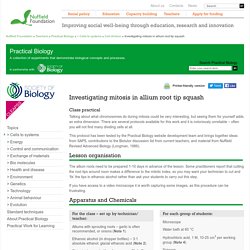 There are several protocols available for this work and it is notoriously unreliable – often you will not find many dividing cells at all. This protocol has been tested by the Practical Biology website development team and brings together ideas from SAPS, contributions to the Biotutor discussion list from current teachers, and material from Nuffield Revised Advanced Biology (Longman, 1986). The allium roots need to be prepared 1-10 days in advance of the lesson. Some practitioners report that cutting the root tips around noon makes a difference to the mitotic index, so you may want your technician to cut and ‘fix’ the tips in ethanoic alcohol rather than ask your students to carry out this step. If you have access to a video microscope it is worth capturing some images, as this procedure can be frustrating. Microscope Water bath at 60 °C Scissors Beaker, 100 cm3, 2. About Interactive Cancer Atlas - Cancer. The Interactive Cancer Atlas (InCA) lets you create customized United States maps showing how many people were diagnosed with or died from cancer by cancer site, gender, race/ethnicity, and state during a given period. 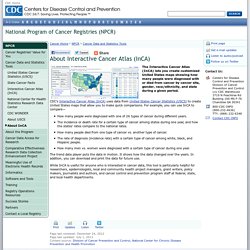 CDC's Interactive Cancer Atlas (InCA) uses data from United States Cancer Statistics (USCS) to create United States maps that allow you to make quick comparisons. For example, you can use InCA to compare— How many people were diagnosed with one of 26 types of cancer during different years. The incidence or death rate for a certain type of cancer among states during one year, and how the states' rates compare to the national rates. How many people died from one type of cancer vs. another type of cancer. The trend data player puts the data in motion. What is cancer? Animated Introduction to Cancer Biology (Full Documentary) To My Path. Chemotherapy Can Inadvertently Encourage Cancer Growth. Cancer Cells and Chemotherapy - What is Chemotherapy? - Chemocare. Cancerous tumors are characterized by cell division, which is no longer controlled as it is in normal tissue. 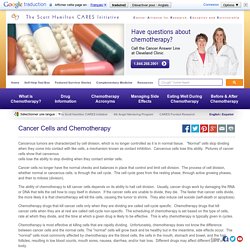 "Normal" cells stop dividing when they come into contact with like cells, a mechanism known as contact inhibition. Cancerous cells lose this ability. Pictures of cancer cells show that cancerous cells lose the ability to stop dividing when they contact similar cells. Cancer cells no longer have the normal checks and balances in place that control and limit cell division. The process of cell division, whether normal or cancerous cells, is through the cell cycle. 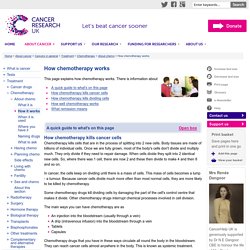 This is how normal body tissues grow. But cancer cells divide much more often than normal cells, so they are more likely to be killed by chemotherapy. Some chemotherapy drugs kill dividing cells by damaging the part of the control centre inside each cell that makes it divide. Differences Between Cancer and Normal Cells. Updated December 16, 2014. 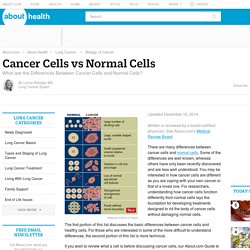 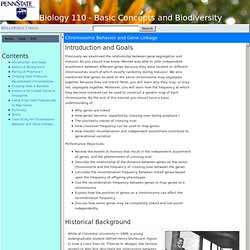 As you should now know, Mendel was able to infer independent assortment between different genes because they were located on different chromosomes (each of which assorts randomly during meiosis). We also mentioned that genes located on the same chromosome may segregate together because they are linked. Next, you will learn why they may, or may not, segregate together. Moreover, you will learn how the frequency at which they become unlinked can be used to construct a genetic map of each chromosome. LabBench. Study this small section of a slide of Sordaria to determine if crossing over has occurred in the asci designated by an X. 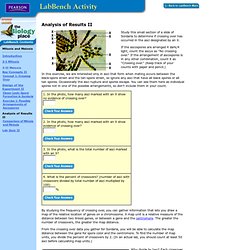 If the ascospores are arranged 4 dark/4 light, count the ascus as "No crossing over. " If the arrangement of ascospores is in any other combination, count it as "Crossing over. " (Keep track of your counts with paper and pencil.) In this exercise, we are interested only in asci that form when mating occurs between the black-spore strain and the tan-spore strain, so ignore any asci that have all black spores or all tan spores.

Occasionally the asci rupture and spores escape. By studying the frequency of crossing over, you can gather information that lets you draw a map of the relative location of genes on a chromosome. From the crossing over data you gather for Sordaria, you will be able to calculate the map distance between the gene for spore color and the centromere. How Cells Divide. Share By Rick Groleau Posted 10.09.01 NOVA Most of the time, when a cell in our bodies divides, each new cell carries a complete set of chromosomes. 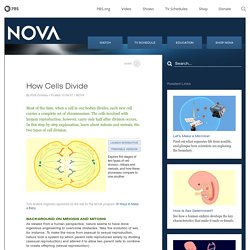 The cells involved with human reproduction, however, carry only half after division occurs. In this step-by-step explanation, learn about mitosis and meiosis, the two types of cell division. This feature originally appeared on the site for the NOVA program 18 Ways to Make a Baby. Background on Meiosis and Mitosis As viewed from a human perspective, nature seems to have done ingenious engineering to overcome obstacles.