Theory of Knowledge Filmography. 'The Oxford Murders' and Knowledge A perfect movie for lovers of Mathematics (the book of the same title is good too). 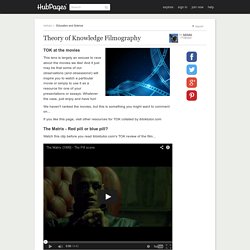 The opening scene is a fascinating anecdote about how Wittgenstein wrote ideas for the Tractatus in a notebook while being fired upon from all directions during the First World War. This is, however, just a prelude to the knowledge question which the philosopher addressed: how can we know the truth? Imagine the irony of the moment as he sat there in the horror of battle. As the opening speech explains, Wittgenstein framed his approach to this KQ through the language and logic of mathematics, hoping to find an answer that would yield the same certainty and absolute rigorous knowledge of mathematical reason. "Wherof one cannot speak; thereof one must remain silent. " This has a range of implications: is truth, ultimately, unknowable? After the war, Wittgenstein gave away his fortune and became an elementary school teacher... You'll connect with your readers.

Essential Movies for a Student of Philosophy - Movie List on mubi. I’m not talking about movies that make you think deep crazy stuff. 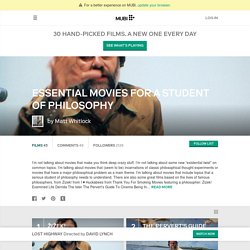 I’m not talking about movies that make you think deep crazy stuff. From Zizek! From I ♥ Huckabees from Thank You For Smoking Movies featuring a philosopher: Zizek! Movies featuring the ideas of particular philosophers: Nietzsche (2003)* My Night At Maud’s Nietzsche and the Nazis (2006)* Other: The Elegant Universe (2003)* M.A. The Best Movies For IB Theory Of Knowledge Classes – What Are Your Suggestions? Generally, the only times students in my classes watch full movies are the few times I’m absent (though we’ll often watch short clips), and when I’m not there it usually relates to a school-related meeting. 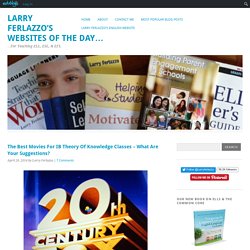 All of the English teachers at our school spend four days each year — two near the beginning and two near the end — to review writing assessments all students in our school do twice a year (you can read all about that process at a previous post). Two of those days are coming-up and, since substitute teachers aren’t allowed to supervise computer use, I’m going to have my IB Theory of Knowledge class students watch a movie. They’ll be watching “Inception” (you can download the hand-out they need to complete while watching it). It also got me wondering about other movies that might be useful for TOK classes, too.