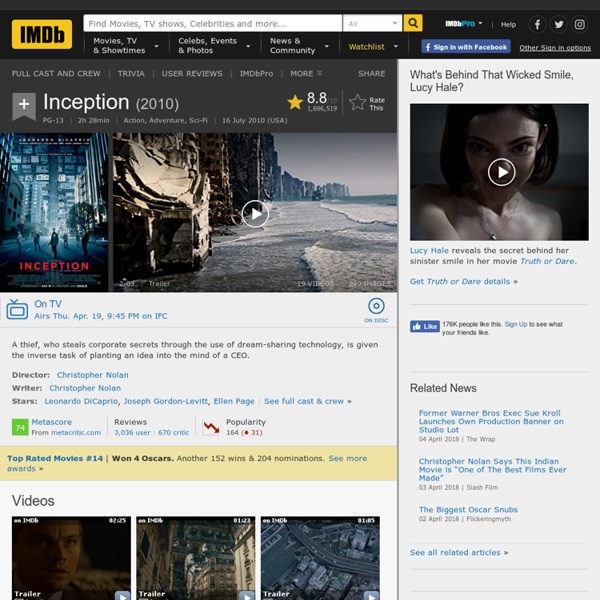 Edit Storyline Dom Cobb is a skilled thief, the absolute best in the dangerous art of extraction, stealing valuable secrets from deep within the subconscious during the dream state, when the mind is at its most vulnerable. Cobb's rare ability has made him a coveted player in this treacherous new world of corporate espionage, but it has also made him an international fugitive and cost him everything he has ever loved. Now Cobb is being offered a chance at redemption. One last job could give him his life back but only if he can accomplish the impossible-inception. Plot Summary | Plot Synopsis Edit Details Release Date: 16 July 2010 (USA) See more » Also Known As: Inception: The IMAX Experience See more » Box Office Budget: $160,000,000 (estimated) Opening Weekend: £5,912,814 (UK) (16 July 2010) Gross: $292,568,851 (USA) (31 December 2010) See more » Company Credits Technical Specs Runtime: Aspect Ratio: 2.35 : 1 See full technical specs » Edit Did You Know? Trivia Goofs Quotes Crazy Credits Soundtracks

The Best Movies For IB Theory Of Knowledge Classes – What Are Your Suggestions? Generally, the only times students in my classes watch full movies are the few times I’m absent (though we’ll often watch short clips), and when I’m not there it usually relates to a school-related meeting. All of the English teachers at our school spend four days each year — two near the beginning and two near the end — to review writing assessments all students in our school do twice a year (you can read all about that process at a previous post). Two of those days are coming-up and, since substitute teachers aren’t allowed to supervise computer use, I’m going to have my IB Theory of Knowledge class students watch a movie. They’ll be watching “Inception” (you can download the hand-out they need to complete while watching it). It also got me wondering about other movies that might be useful for TOK classes, too.

Fight Club (1999) Theory of Knowledge Filmography 'The Oxford Murders' and Knowledge A perfect movie for lovers of Mathematics (the book of the same title is good too). The opening scene is a fascinating anecdote about how Wittgenstein wrote ideas for the Tractatus in a notebook while being fired upon from all directions during the First World War. This is, however, just a prelude to the knowledge question which the philosopher addressed: how can we know the truth? Sucker Punch (2011 Oblivion (2013) Essential Movies for a Student of Philosophy - Movie List on mubi I’m not talking about movies that make you think deep crazy stuff. I’m not talking about some new “existential twist” on common topics. I’m talking about movies that (seem to be) incarnations of classic philosophical thought experiments or movies that have a major philosophical problem as a main theme. I’m talking about movies that include topics that a serious student of philosophy needs to understand. There are also some great films based on the lives of famous philosophers. from Zizek! from I ♥ Huckabees from Thank You For Smoking Movies featuring a philosopher: Zizek!