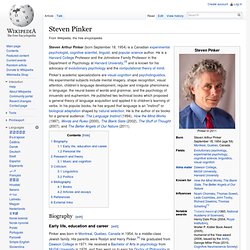 He is a Harvard College Professor and the Johnstone Family Professor in the Department of Psychology at Harvard University,[3] and is known for his advocacy of evolutionary psychology and the computational theory of mind. Pinker's academic specializations are visual cognition and psycholinguistics. His experimental subjects include mental imagery, shape recognition, visual attention, children's language development, regular and irregular phenomena in language, the neural bases of words and grammar, and the psychology of innuendo and euphemism. How Morality Changes in a Foreign Language. What defines who we are? 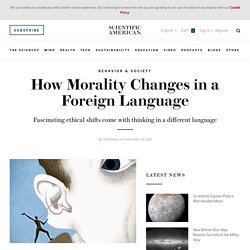 Our habits? Future - The people who study the meaning of nonsense. A young Stephen Fry is sitting on a couch, philosophising about the English language. 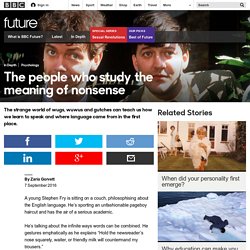 He’s sporting an unfashionable pageboy haircut and has the air of a serious academic. He’s talking about the infinite ways words can be combined. He gestures emphatically as he explains “Hold the newsreader’s nose squarely, waiter, or friendly milk will countermand my trousers.” He pauses to let his point sink in, then continues “One sentence, common words, but never before placed in that order… You see?” Hugh Laurie looks at the camera, opens his mouth as if to explain, then decides against it. The famous Fry & Laurie language sketch parodies the lofty pontificating of academics – which often borders on the nonsense. 10 Words for Emotions You Didn’t Even Know You Had. In recent years, neuroscience has introduced a new way of thinking about our emotions. 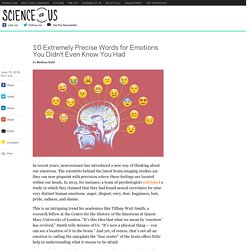 The scientists behind the latest brain-imaging studies say they can now pinpoint with precision where these feelings are located within our heads. In 2013, for instance, a team of psychologists published a study in which they claimed that they had found neural correlates for nine very distinct human emotions: anger, disgust, envy, fear, happiness, lust, pride, sadness, and shame. This is an intriguing trend for academics like Tiffany Watt Smith, a research fellow at the Centre for the History of the Emotions at Queen Mary University of London. “It’s this idea that what we mean by ‘emotion’ has evolved,” Smith tells Science of Us. Does Speaking A Foreign Language Change Your Personality? My high school English teacher used to tell us stuff like, “Learning a foreign language changes you forever.” 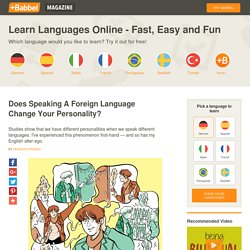 Despite being an obvious attempt to make us passionate about her subject, her words made sense to me — the kid who quoted obscure Buffy the Vampire Slayer lines and treated Alanis Morissette’s lyrics like the word of God. After all, without a basic understanding of the English language I couldn’t have done any of that, and all those beautiful imaginary friendships would have never blossomed. Then I made it to adulthood (I think) and experienced first-hand the perks of speaking a foreign language: hitting on exotic men (whilst still using Buffy references as pick up lines #ForeverAlone) and weaseling my way into more office gossip than ever before.

Split of the online self Learning English strongly affected my habits, but was I really profoundly changed by it? Blogging is where the signs of this metamorphosis first showed. The persistent vegetative state of the party. Ten Most Difficult Words to Translate - ALTA Language Services. Sometimes even the finest translators come up against words that defy translation. 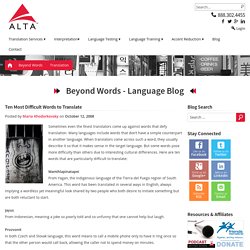 Many languages include words that don’t have a simple counterpart in another language. When translators come across such a word, they usually describe it so that it makes sense in the target language. But some words pose more difficulty than others due to interesting cultural differences. Here are ten words that are particularly difficult to translate: Orangutan inside Argentina zoo granted 'non-human person rights' in landmark ruling - Americas. Experts said the verdict could open the floodgates to thousands of similar cases. 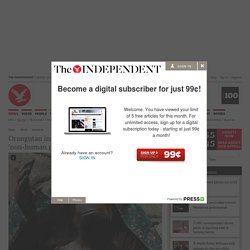 The ruling came after animal rights campaigners filed a habeas corpus petition – a document more typically used to challenge the legality of a person’s detention or imprisonment – on behalf of the Sumatran orangutan, who was born at a German zoo and was transferred to Buenos Aires two decades ago. The outcome hinged on whether Sandra should be treated as a "thing" or a "person", with the Association of Officials and Lawyers for Animal Rights (Afada) arguing that she should not be treated as an object because of her intelligence and complex ways of thinking. The court agreed that Sandra deserved the basic rights of a "non-human person". Loading gallery Critically endangered species 1 of 10 Orangutans are part of the family Hominidae – or great ape – along with gorillas, chimpanzees and humans. Sandra will be transferred to a sanctuary in Brazil unless the zoo appeals within the next 10 days.

Language and Thought. Thinking in a Foreign Language Makes Decisions More Rational. To judge a risk more clearly, it may help to consider it in a foreign language. 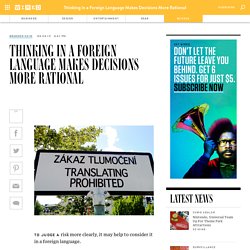 A series of experiments on more than 300 people from the U.S. and Korea found that thinking in a second language reduced deep-seated, misleading biases that unduly influence how risks and benefits are perceived.