Forbes Welcome. Shopping? Watch out. Your Facebook posts and zip code may be lowering your credit score. Are you panicking about last-minute gift shopping? 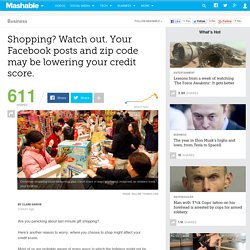 Here’s another reason to worry: where you choose to shop might affect your credit score. Most of us are probably aware of many ways in which the holidays might not be good for our finances—including the fact that a higher credit card balance can contribute to a lower credit score. But this shopping season may affect your creditworthiness in more ways than you think. Over the past few years, a number of companies have started to apply big data analytics to credit scoring, broadening credit metrics beyond the traditional factors like as your payment history and the amounts you owe. The new, alternative factors include other financial information, such as the balance in your savings and retirement accounts, and whether you pay your utility bill on time.

But The practice of including shopping habits in credit evaluations began as early as 2008, and was not limited to fringe companies you’ve never heard of. There are downsides too, though. How Much Is a Click on the Internet Really Worth? For much of the modern, advertising-driven Internet, attention is money. 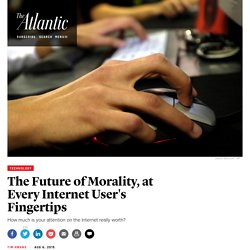 Whether a publisher, search engine, or social platform, the business model is fundamentally the same: The attention of users is aggregated and then sold to advertisers who want to bring a message to that audience. To that end, supplying attention itself can be an act of complicity in the unethical actions of a platform. The mere act of choosing to look at something online generates real value for a company, materially helping to support its staff, its content, and the social interactions that a platform plays host to. Facebook Could Check Your Loan Applications Against Your Friends' Credit. Facebook is Watching You Watch the News Feed. The all-seeing, all-powerful algorithm that controls what shows up in your Facebook News Feed doesn’t just take clicks and comments into account: It also measures the amount of time you spend looking at something, the company has revealed. 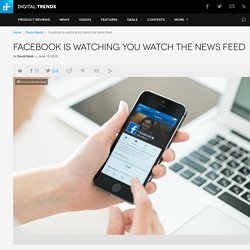 Facebook finally opens its data firehose to select advertisers. LinkedIn and the Reputation Economy. Photo Are you perusing LinkedIn at work more than usual? 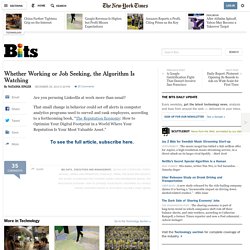 That small change in behavior could set off alerts in computer analytics programs used to surveil and rank employees, according to a forthcoming book, “The Reputation Economy: How to Optimize Your Digital Footprint in a World Where Your Reputation Is Your Most Valuable Asset.” If your LinkedIn browsing is noticed “by a recruiter, look forward to increased cold calls trying to lure you into new jobs,” the authors write. “If it’s caught by your company, look forward to either a conversation about what it would take to keep you — or a swift kick toward the door.”

In my latest Sunday Business column, I wrote about “The Reputation Economy” and another coming book, “The Black Box Society: The Secret Algorithms That Control Money and Information.” Researchers can profile Facebook users with just their likes. Remember the time you liked a beer pong video on Facebook and thought nothing more of it? 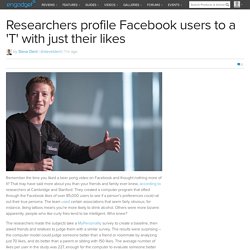 That may have said more about you than your friends and family ever knew, according to researchers at Cambridge and Stanford. They created a computer program that sifted through the Facebook likes of over 85,000 users to see if a person's preferences could rat out their true persona. How Data Nourishes Agile Marketing At Kraft Foods. How much privacy are consumers willing to give up? More than you think. Why are customers reluctant to complete long forms with their details despite offering them discounts, but don’t blink an eye about sharing their whole life on Facebook? 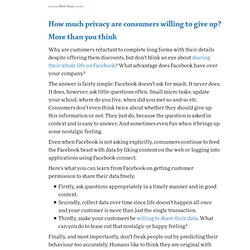 What advantage does Facebook have over your company? The answer is fairly simple: Facebook doesn’t ask for much. It never does. It does, however, ask little questions often. Netflix spends $150 million on content recommendations every year. Netflix is employing 300 people to maintain and improve its content recommendations, and spending a total of $150 million dollar on recommending movies and TV shows to its members every year, according to the company’s Chief Product Officer Neil Hunt. 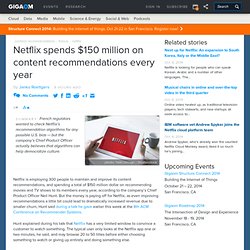 But the money is paying off for Netflix, as even improving recommendations a little bit could lead to dramatically increased revenue due to smaller churn, Hunt said during a talk he gave earlier this week at the 8th ACM Conference on Recommender Systems. Hunt explained during his talk that Netflix has a very limited window to convince a customer to watch something. The typical user only looks at the Netflix app one or two minutes, he said, and may browse 20 to 50 titles before either choosing something to watch or giving up entirely and doing something else. That’s why Netflix is trying to find the best possible content for everyone, which can include diving deep into niche and even fringe content. Google Knows You Better Than You Know Yourself. Every weekday at 3:40 p.m., the message popped up on my phone: 22 mins to Work. Google Now was doing its job. It was reminding me where to go and how to get there. Google Now, in case you don’t know, is the flagship software embedded in the Android smartphone operating system (it’s also available on iOS); its aim is to seamlessly turn your device into a personal assistant that provides “just the right information at just the right time.”

It achieves this by using Google’s devouring awareness of your calendar, inbox, and movements. YouAreWhatYouLike. Amazon Knows What You Want Before You Buy It. Anticipatory shipping may be closest that retail can come to a crystal ball. 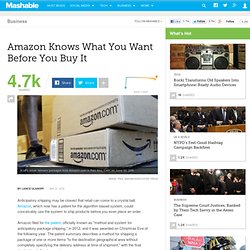 Amazon, which now has a patent for the algorithm-based system, could conceivably use the system to ship products before you even place an order. Amazon filed for the patent, officially known as "method and system for anticipatory package shipping,” in 2012, and it was awarded on Christmas Eve of the following year. The patent summary describes a method for shipping a package of one or more items "to the destination geographical area without completely specifying the delivery address at time of shipment," with the final destination defined en route.

While Amazon would not comment on the patent, the benefits of such a system for the No. 1 retailer in the world are obvious. Predicting customers' orders could increase sales and potentially reduce shipping, inventory and supply chain costs. Google Now Alerts You If You're Near a Product You've Researched Online. Google is attempting to bridge the online and offline worlds with a new feature in Google Now that alerts you if you walk near a product you've researched online. 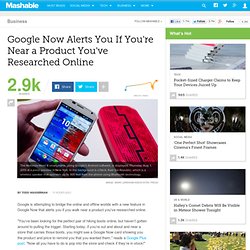 "You’ve been looking for the perfect pair of hiking boots online, but haven’t gotten around to pulling the trigger. Starting today, if you’re out and about and near a store that carries those boots, you might see a Google Now card showing you the product and price to remind you that you wanted them," reads a Google Plus post. "Now all you have to do is pop into the store and check if they’re in stock! " Reps from the company couldn't be reached for comment about how close you need to be to such a product and whether you can turn off the feature. The enhancement comes on the same day Google announced it was expanding same-day delivery for Google Shopping Express in parts of New York City and Los Angeles. Calendar Fills Itself Up Based on What You Like. The Spark of Genius Series highlights a unique feature of startups and is made possible by Microsoft BizSpark .

If you would like to have your startup considered for inclusion, please see the details here . How Intuit uses big data to ‘delight’ you — Cloud Computing News. Rethinking Privacy in an Era of Big Data. How Google Organizes the World: Q&A With the Manager of Knowledge Graph. In May, Google launched a major overhaul of its search results. 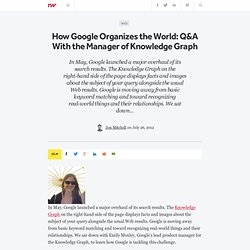 The Knowledge Graph on the right-hand side of the page displays facts and images about the subject of your query alongside the usual Web results. Google is moving away from basic keyword matching and toward recognizing real-world things and their relationships. We sat down with Emily Moxley, Google's lead product manager for the Knowledge Graph, to learn how Google is tackling this challenge.

Facebook vs. Google, Who Can Win Search? It’s a well-known fact that most people don’t get past page one of Google’s search results. This is why the company is doubling down on integrating a social layer into everything that it does. While algorithms can crawl the entire web to find relevant information, could the things that we share on Facebook become a better and more reliable data-set? According to a piece by Businessweek, Facebook has a team that is working on making search on the site better than it is right now: Searching the social network could get a lot better in the near future.

About two dozen Facebook engineers, led by a former Google engineer named Lars Rasmussen, are working on an improved search engine, say two people familiar with the project who did not want to be named because the company is in a ﻿quiet period ahead of its IPO. We know that Facebook and Google have one thing in common, they absolutely love data. Aggregation Is Not Curation - There Is A Big Difference. Posted by Tom Foremski - November 2, 2010 Curation is becoming an increasingly important term and for good reason: the online world is increasingly messy, muddled and full of blind alleys.

Robert Scoble on cinch.fm - . @Pearltrees is going to be +the+ way to curate LeWeb. I visited their headquarters to learn what's new in today's release. - 132029. Curation And The Human Web... Posted by Tom Foremski - November 16, 2010 There is no doubt in my mind that the topic of curation and the Internet, is an important one and that it will be a dominant topic in 2011. Curation is important because we are reaching the limits of what can be achieved through algorithms and machines in organizing and navigating the Internet. Aggregation looks like curation but it's not. What’s The Role Of Curation In Search? Earlier this year Tom Foremski brought a collection of fascinating friends and colleagues together to explore the growing notion of content curation on the Internet.

Sears Competes On Big Data and Loyalty Programs. LinkedIn Is Hiring People To Unlock The Value In Your Data. Google to tap users’ reviews and photos for web ad “endorsements” Prismatic wants to build a social network around all of your interests, which is actually a lot harder than it sounds. There are social networks all around us these days, from Facebook and Twitter to more targeted networks like Instagram and Path — and new ones seem to be launching every week.

What is Social Media Sentiment? State is more than just a social network for opinions. A new social network launched on Thursday claims to connect people through their opinions on millions of topics. State invites users to express short opinions on anything from Justin Bieber and Syria to the new Samsung Galaxy S4 or WhatsApp, tagged with simple three-word subject labels drawn from a database of almost 11,000 descriptors.

Posts can be as long or short as the user desires. A real-time map of the world's emotions. EBay Will Support Targeted Ads Based on User Activity: Report. Square sets its sights on check-ins: 'We can do something better' My Letter to Starbucks Mobile.