Using React with Webpack Tutorial. This article is a guest post from Christian Alfoni, who is a speaker among other world-class React hackers at Reactive2015 in Bratislava, November 2-4 2015. 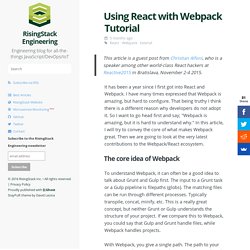 It has been a year since I first got into React and Webpack. I have many times expressed that Webpack is amazing, but hard to configure. That being truthy I think there is a different reason why developers do not adopt it. So I want to go head first and say; "Webpack is amazing, but it is hard to understand why. " In this article, I will try to convey the core of what makes Webpack great. The core idea of Webpack To understand Webpack, it can often be a good idea to talk about Grunt and Gulp first. 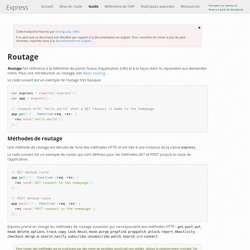 React. React. Design. Modèles de couleurs. RGB Color Gradient Maker. Ember.View. Config. Git Reference. Git reset is probably the most confusing command written by humans, but it can be very useful once you get the hang of it. 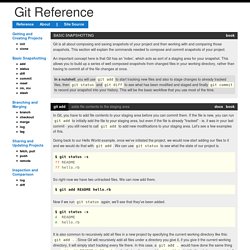 There are three specific invocations of it that are generally helpful. git reset HEAD unstage files from index and reset pointer to HEAD First, you can use it to unstage something that has been accidentally staged. Let's say that you have modified two files and want to record them into two different commits. You should stage and commit one, then stage and commit the other.

Science, Technology, Programming and Anime. This page deals with the typography attributes of text. 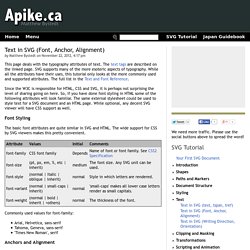 The text tags are described on the linked page. SVG supports many of the more esoteric aspects of typography. While all the attributes have their uses, this tutorial only looks at the more commonly used and supported attributes. The full list in the Text and Font Reference. Since the W3C is responsible for HTML, CSS and SVG, it is perhaps not surprising the level of sharing going on here. Font Styling The basic font attributes are quite similar in SVG and HTML. Commonly used values for font-family: Arial, Helvetica, sans-serifTahoma, Geneva, sans-serif'Times New Roman', serif Anchors and Alignment The anchor point is the x and y position defined by the text tag. Sorting arrays in Ember.js by various criteria - Balint Erdi. I concluded the previous post on route refactoring by saying that the fact that the artists.songs route now has the songs as its model will pay dividends in the future. 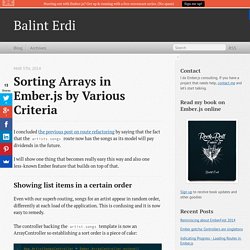 I will show one thing that becomes really easy this way and also one less-known Ember feature that builds on top of that. Showing list items in a certain order Even with our superb routing, songs for an artist appear in random order, differently at each load of the application. This is confusing and it is now easy to remedy. The controller backing the artist.songs template is now an ArrayController so establishing a sort order is a piece of cake: What I say with these sorting-related definitions is that I want songs to be shown in descending order of first their ratings and then -should the rating be the same- by title. Sorting by multiple properties, in different directions. SVG path element. An Ember JS Gauge Component. This is a gauge (well kind of) made with Ember Components and CSS3 transforms. 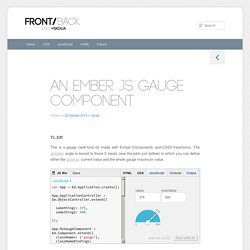 The pointer angle is bound to those 2 inputs (see the jsbin just bellow) in which you can define either the pointer current value and the whole gauge maximum value. The Template The main idea of having a gauge component is that you can use and re-use it anywhere in your Ember app(s), and its main purpose is to indicate a current value relative to a maximum value.

So, if it could have 2 attributes value and maxValue that would be perfect. SVGround : tout sur SVG. SVG path element. The SVG <path> element is used to draw advanced shapes combined from lines, arcs, curves etc. with or without fill. 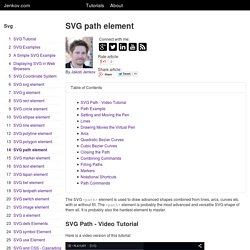 The <path> element is probably the most advanced and versatile SVG shape of them all. It is probably also the hardest element to master. SVG Path - Video Tutorial Here is a video version of this tutorial: JustGage.com. Search Results for gauge on CodePen. Feed Normalization with Ember Data 1.0.