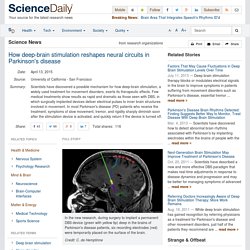 Few medical treatments show results as rapid and dramatic as those seen with DBS, in which surgically implanted devices deliver electrical pulses to inner brain structures involved in movement. In most Parkinson's disease (PD) patients who receive the treatment, symptoms of slow movement, tremor, and rigidity sharply diminish soon after the stimulation device is activated, and quickly return if the device is turned off. But surprisingly, there has been very little understanding of precisely why and how DBS works so well--a lack of knowledge that has held back efforts to further improve the therapy. Despite the great success of DBS, some significant problems remain. Mindfulness_in_pd_.pdf. Appi.ajp.161.6. We sought to determine whether the compulsive hoarding syndrome is associated with unique abnormalities of brain function that are different from those seen in other OCD patients by using PET to identify cerebral metabolic patterns specifically associated with compulsive hoarding syndrome. 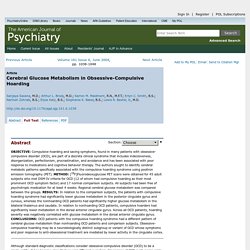 Subjects Of the 45 OCD patients, 12 met those criteria and were diagnosed with compulsive hoarding syndrome. All subjects were in good physical health. Of the 45 patients with OCD, 16 had comorbid major depression, including three of the 12 compulsive hoarders (25%) and 13 of the 33 nonhoarding OCD patients (39%). Five patients with OCD had comorbid tic disorders. 661.full.pdf. Depression in Adults with a Chronic Physical Health Problem: Treatment and Management. NCBI - WWW Error 803 Diagnostic. Untitled. Recognising and managing antidepressant discontinuation symptoms. Selective Serotonin Reuptake Inhibitor Antidepressant Treatment Discontinuation Syndrome: A Review of the Clinical Evidence and the Possible Mechanisms Involved. Update on Apraxia. 860.full.pdf. Mental Health Forum. Being a Parent with Mental Illness. Being a parent can be tough at the best of times, some days it can feel like a constant battle. 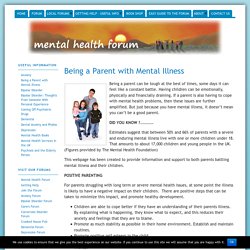 Having children can be emotionally, physically and financially draining. If a parent is also having to cope with mental health problems, then these issues are further amplified. Portal:Thinking. Emotional self-regulation. Emotional self-regulation or regulation of emotion is the ability to respond to the ongoing demands of experience with the range of emotions in a manner that is socially tolerable and sufficiently flexible to permit spontaneous reactions as well as the ability to delay spontaneous reactions as needed.[1] It can also be defined as extrinsic and intrinsic processes responsible for monitoring, evaluating, and modifying emotional reactions.[2] Emotion self-regulation belongs to the broader set of emotion-regulation processes, which includes the regulation of one's own feelings and the regulation of other people's feelings.[3] Theory[edit] Process model[edit] The process model of emotion regulation is based upon the modal model of emotion. 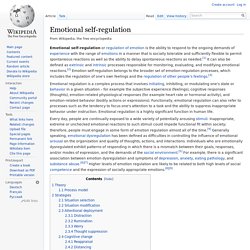 Sleep and memory. Memory is the cognitive process whereby experiences, learning and recognition are recalled.[1] Memory “formation” is a product of brain plasticity, the structural changes within synapses that create associations between stimuli. 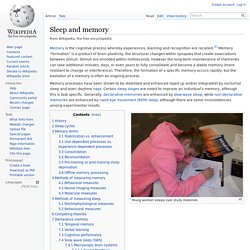 Stimuli are encoded within milliseconds, however the long-term maintenance of memories can take additional minutes, days, or even years to fully consolidate and become a stable memory (more resistant to change or interference). Therefore, the formation of a specific memory occurs rapidly, but the evolution of a memory is often an ongoing process.

Memory processes have been shown to be stabilized and enhanced (sped up and/or integrated) by nocturnal sleep and even daytime naps. Certain sleep stages are noted to improve an individual’s memory, although this is task specific. Young woman asleep over study materials. History[edit] Sleep cycles[edit] Sleep cycles, REM indicated in red. Dyspraxia - a motor planning disorder. Motor planning is often referred to as praxis, but a more accurate definition of praxis is the organization of the self. 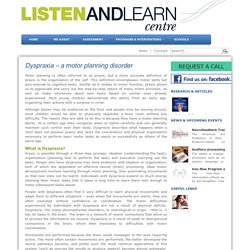 This definition encompasses motor skills but also extends to cognitive tasks. Insofar as it relates to motor function, praxis allows us to appreciate and carry out the step-by-step nature of many motor activities, as well as make inferences about new tasks based on similar ones already experienced. Most young children demonstrate this ability from an early age, organizing their actions with a purpose in mind.

Dyspraxia - a motor planning disorder. Trier social stress test. Sketch of the administration of the Trier Social Stress Test History[edit] Psychosocial stress is associated with a variety of biomarkers, such as salivary and blood serum cortisol, prolactin, human growth hormone (hGH), adrenocorticotropic hormone (ACTH), and heart rate.[1] Prior to 1993, a number of laboratory tasks were used to elicit these stress markers for research, including the cold pressor test, the Stroop test, public speaking, and others.[2] These studies encountered two problems: First, there was large interindividual variability in the physiological response to stress, and second, the methods previously used tended to produce effects that were too small to be reliably measured. 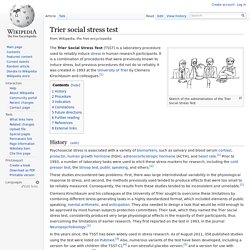 Consequently, the results from these studies tended to be inconsistent and unreliable.[1] In the years since, the TSST has been widely used in stress research. Testy. Supports rare disease research and information. Mystic Crystal Revelation. @ Ack! April Phools.