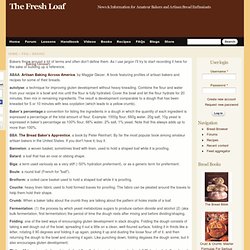 As I use jargon I'll try to start recording it here for the sake of building up a reference. ABAA: Artisan Baking Across America, by Maggie Glezer.

Real Sourdough Bread. There is a lot of confusion about what sourdough bread is. 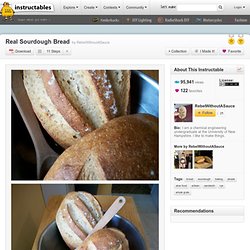 Is it bread with a sour taste? Do they only make it in San Francisco? What makes it so different? Sourdough bread is bread that is leavened using a sourdough culture containing wild yeasts and bacteria. The yeast that can be bought in small packages and jars at the store is commercial yeast . Levure. Kitchen Hack: One-Minute Bread. Oven-fresh bread is one of life’s simple joys. 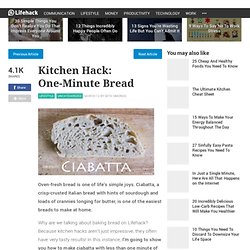 Ciabatta, a crisp-crusted Italian bread with hints of sourdough and loads of crannies longing for butter, is one of the easiest breads to make at home. Why are we talking about baking bread on Lifehack? Because kitchen hacks aren’t just impressive, they often have very tasty results! 23 Homemade Breads to Fit Any Schedule — Recipe Roundup. Previous image Next image Whether you have an hour or a whole day, you can count on having fresh bread. 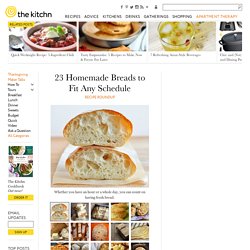 Fresh-baked bread is a special treat, a delicious treasure of a home-cooked meal. But we know how hard it can be to tackle bread.

Formes de pains. Poolish Baguettes. Baguettes with Poolish. It’s been said that the baguette, although one of the simplest breads (being comprised of only flour, water, yeast and salt), is perhaps the most difficult bread to make well. 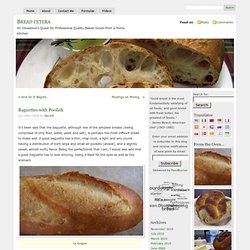 A good baguette has a thin, crisp crust, a light and airy crumb having a distribution of both large and small air pockets (alveoli), and a slightly sweet, almost nutty flavor. Being the perfectionist that I am, I would also add that a good baguette has to look enticing, being a feast for the eyes as well as the stomach. La Grigne The baguette formula used here is a modification of the Baguettes with Poolish formula described by Hamelman on page 101 of Bread: A Baker’s Book of Techniques and Recipes (see book for baker’s percentages). The main changes were in the method of mixing (see Musings on Mixing…), the amount of yeast used in the final dough and the elimination of the folding step. Poolish10.6 oz. Prepare the poolish the night before baking. Mature poolish Ingredients fully incorporated.

Demo: Proving Bread - Pastry. Part 1: The words(pictures in the next post) Following Wendy’s request I will try and elucidate some of the mysteries of proofing.Bread dough is a complex, and not entirely understood system. 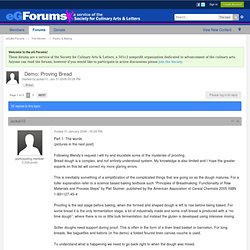 My knowledge is also limited and I hope the greater experts on this list will correct my more glaring errors. This is inevitably something of a simplification of the complicated things that are going on as the dough matures. For a fuller explanation refer to a science based baking textbook such “Principles of Breadmaking: Functionality of Raw Materials and Process Steps” by Piet Sluimer, published by the American Association of Cereal Chemists 2005 ISBN 1-891127-45-4 Proofing is the last stage before baking, when the formed and shaped dough is left to rise before being baked. Softer doughs need support during proof. To understand what is happening we need to go back right to when the dough was mixed. When the dough is mixed air is mixed into the dough to form micro-bubbles.

Baking and the use of steam. Once our dough has been properly fermented, shaped, proved, and possibly slashed, it is time to bake it. 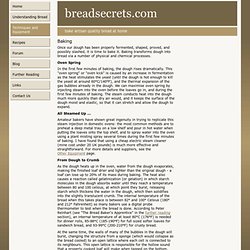 Baking transforms dough into bread via a number of physical and chemical processes. Oven Spring In the first few minutes of baking, the dough rises dramatically. This "oven spring" or "oven kick" is caused by an increase in fermentation as the heat stimulates the yeast (until the dough is hot enough to kill the yeast at around 60°C/140°F), and the thermal expansion of the gas bubbles already in the dough. We can maximise oven spring by injecting steam into the oven before the loaves go in, and during the first few minutes of baking.

Baking Measurements and Conversions - TheBakingPan.com. Click below for measurements and conversions: All conversions in the charts below are approximate and most have been rounded up or down to the nearest whole number for easy measuring. 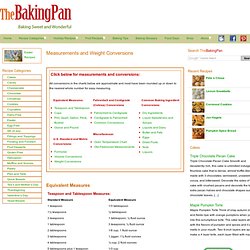 Equivalent Measures U.S. Standard Measure and Metric Conversion The following chart is a guide for converting standard US measurements to metric measurements. How to Convert Your Recipe to Metric and Use Weights Instead of Volume. Weight to Volume Cooking Conversion. Artisan bread. Artisan bread is best described by thinking about the person who makes the bread. 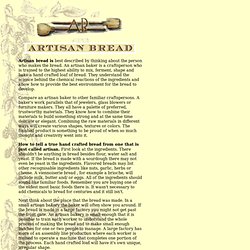 An artisan baker is a craftsperson who is trained to the highest ability to mix, ferment, shape and bake a hand crafted loaf of bread. They understand the science behind the chemical reactions of the ingredients and know how to provide the best environment for the bread to develop. The Bread Bakers Guild of America. San Francisco Baking Institute. 12SSC_TypesFlourPub. About-wfc-flour-types-booklet. Bakery technology - Index. Bread and the technology of bread production If you are looking for help to solve a bakery problem in a speedy and professional way, contact Noël Haegens Terug naar nederlandstalige versie Bread is made from wheat flour, water, yeast and salt : with these four "simple" raw materials we succeed in making many thousands of different types of bread. 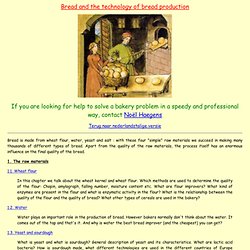 Apart from the quality of the raw materials, the process itself has an enormous influence on the final quality of the bread. 1. 1.1. In this chapter we talk about the wheat kernel and wheat flour. 1.2. Water plays an important role in the production of bread. Le Pain - Observatoire du pain - Le centre d'informations scientifiques sur le pain.

Bread Making Process and Techniques, Risedough. Temperature_for_Yeast_Bread_Production.pdf. Shortcrust Pies Without Dishes. Parmesan Crackers. Week Forty-Nine: Breads With Cheese Parmesan, that buttery, nutty, and hard grating cheese, has a unique melting characteristic among cheeses. When heated and cooled, a pile of plain parmesan slumps into a crisp, almost crackerly thing. Called a “frico” when prepared thusly, it’s something like what I was expecting from this recipe. Originally, the recipe was titled “Biscotti alla Parmigiana“, implying a fairly specific item, crunchy and heavily parmesan-forward. But after a cursory glance, it became apparent that the title was far from apt; in fact, it’s almost a lie. The word “biscotti” literally means “twice-cooked”, which these are certainly not.

These crackers, on the other hand, are made from a reasonably even mixture of flour, butter, and parmesan cheese. Having gotten that semantic chip off my shoulder, I will say that Ms. Parmesan Crackers Adapted from Giada De Laurentiis, via Food Network Makes about 30 crackers 1. Parmesan Garlic Bread. Garlic bread can be a great addition to you dinner. These days, it seems easiest to just go to the local supermarket and pick up a loaf of garlic bread. However, the last time I checked out the ingredient list of my local supermarket chain's garlic bread, one of the primary ingredients was partially hydrogenated vegetable oil. Why eat the supermarket stuff when it's so easy to convert a plain loaf of bread into garlicky goodness? This recipe works on a 16 oz. loaf of bread (the most common size sold in stores in my area). I find that a thin baguette (or ficelle) is too narrow for the garlic bread to be really satisfying.

We changed it up by using aged Manchego, Parmesan, and a bit of black pepper, for addictive bites that will be a hit at your next cocktail party. Game plan: The cheese puffs can be made up to 2 days in advance and stored at room temperature. Our version of Tartine style bread. You will not be going anywhere for a while! Tell your family you will be stretching and folding for the next 3.5 hours… The last few months we have been making quite a lot of these loaves. We made them with tiny variations and alterations, experimenting with flour, water, times and temperature and above all quantities.

Guest Baker: Chad Robertson. So, a few of you have emailed me about Chad's extended autolyse, an arena new to me as well. I wanted to know what he meant by 'overnight', further, if we add the levain before or after autolyse is accomplished. So many questions swirling all round us, so I decided to defer to Chad himself for a method that would shed some light on things.Of course, he could have sent me an email with a quick bullet-pointed method. Instead, what I got was a beautiful photographic explanation, proving once again that our Guru is all about style and grace. How to Make Whole Wheat Bread.