Seasons and Ecliptic Simulator - Basic Coordinates and Seasons. Space Time Quest. (A Processing game) Daniel Brown Paul Fulda Ludovico Carbone 2010 Have you ever wondered what it would be like to be in charge of a budget of £100 Million!? 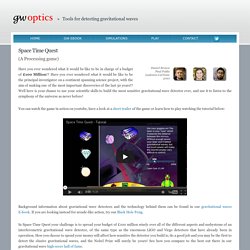 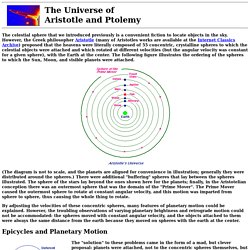 There were additional "buffering" spheres that lay between the spheres illustrated. Ptolemaic. GPS Museum, a database about geolocation and creativity. Time Stories. David Lecossu Normandy born and bred, I was born in Caen in the Calvados, and for as long as I can remember, I’ve always drawn! 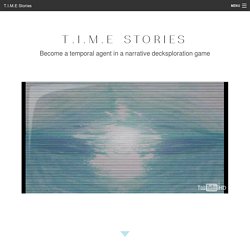 After many scholastic adventures, I found enlightenment at Art School.My diploma in my pocket, I left to live in the capital and I first started as a computer assisted artist in the luxury domain. Far from my world of predilection, one day I decided to leave it all behind and attempt the edventure and commit myself, body and soul, to my neverending passion: drawing!

I had the chance to work as a Concept Artist at Gameloft and even Lightbulb Crew, and I now work as a freelance artist. So it’s with pleasure that I replaced Benjamin in this story. Frontier of Physics: Interactive Map. “Ever since the dawn of civilization,” Stephen Hawking wrote in his international bestseller A Brief History of Time, “people have not been content to see events as unconnected and inexplicable. 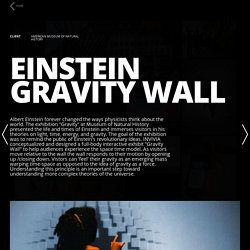 The exhibition "Gravity" at Museum of Natural History presented the life and times of Einstein and immerses visitors in his theories on light, time, energy, and gravity. The goal of the exhibition was to remind the public of Einstein's revolutionary ideas. INVIVIA conceptualized and designed a full-body interactive exhibit "Gravity Wall" to help audiences experience the space time model. As visitors move relative to the wall the wall responds to their motion by opening up /closing down.

Vistors can 'feel' their gravity as an emerging mass warping time-space as opposed to the idea of gravity as a force. Toggle sizesToggle sizes. You Be the Astrophysicist. Many times, the best way to learn about something is to do it. 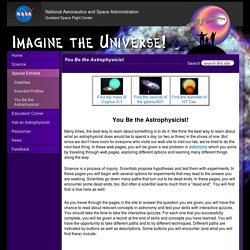 We think the best way to learn about what an astrophysicist does would be to spend a day (or two or three) in the shoes of one. But since we don't have room for everyone who visits our web site to visit our lab, we've tried to do the next best thing. In these web pages, you will be given a real problem in astronomy which you solve by traveling through web pages, exploring different options and learning many different things along the way.

Science is a process of inquiry. Scientists propose hypotheses and test them with experiments. As you travel through the pages in the site to answer the question you are given, you will have the chance to read about relevant concepts in astronomy and test your skills with interactive quizzes. Important: When you encounter a quiz to test what you have learned, always press the "check me" button to check your answer and proceed (rather than pressing the return button). Reach for the Stars: Touch, Look, Listen, Learn. Online. Voyages dans le temps et espace-temps à 4 dimensions. Une physique pour les gouverner tous (Voici la physique, 1e partie) FQXi Video Contest 2014 Top Prize Winner (This Is Physics, part 1) Flatland 2: Sphereland. Flatland 2: Sphereland is the sequel to the movie Flatland which I mentioned in a blog post last year. 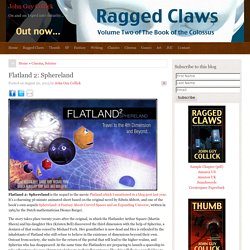 It’s a charming 36 minute animated short based on the original novel by Edwin Abbott, and one of the book’s own sequels Sphereland: A Fantasy About Curved Spaces and an Expanding Universe, written in 1965 by the Dutch mathematician Dionys Burger. The story takes place twenty years after the original, in which the Flatlander Arthur Square (Martin Sheen) and his daughter Hex (Kristen Bell) discovered the third dimension with the help of Spherius, a denizen of that realm voiced by Michael York. Her grandfather is now dead and Hex is ridiculed by the inhabitants of Flatland who still refuse to believe in the existence of dimensions beyond their own. Outcast from society, she waits for the return of the portal that will lead to the higher realms, and Spherius who has disappeared.

The Flatlander’s rocket ship However one of the navigators, Puncto, has found an anomaly. Dig It Games : Mayan Mysteries. A looter has been digging up Maya sites, clearly looking for something specific. 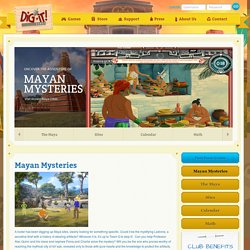 Could it be the mystifying Ladrone, a secretive thief with a history of stealing artifacts? Whoever it is, it’s up to Team Q to stop it! Can you help Professor Alex Quinn and his niece and nephew Fiona and Charlie solve the mystery? 404Sight bande passante espace temps. Chromoscope. Rts.ch - jeunesse - l'oreille des kids. Galaxy Song.