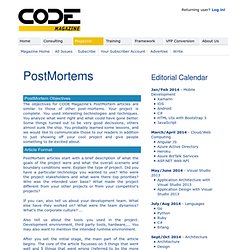 Your project is complete. You used interesting technologies and techniques. You analyze what went right and what could have gone better. Some things turned out to be very good decissions, others almost sunk the ship. Article Format PostMortem articles start with a brief description of what the goals of the project were and what the overall scenario and boundary conditions were. If you can, also tell us about your development team. Also tell us about the tools you used in the project. After you set the initial stage, the main part of the article begins. 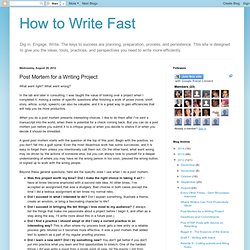 What went wrong? In the lab and later in consulting, I was taught the value of looking over a project when I completed it. Asking a series of specific questions after finishing a work of prose (novel, short story, article, script, speech) can also be valuable, and it is a great way to gain efficiencies that will help you be more productive. When you do a post mortem presents interesting choices. I like to do them after I've sent a manuscript into the world, when there is potential for a check coming back. Opinion: Share your knowledge or suffer the consequences. [A lack of knowledge-sharing is what hindered Japan's game industry growth, says Game Developer magazine EIC Brandon Sheffield. 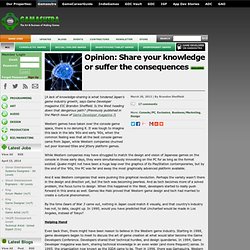 Is the West heading down that dangerous path? (Previously published in the March issue of Game Developer magazine.)] Western games have taken over the console game space, there is no denying it. It was tough to imagine this back in the late '80s and early '90s, when the common feeling was that all the best console games came from Japan, while Western companies churned out poor licensed titles and jittery platform games.

While Western companies may have struggled to match the design and vision of Japanese games on the console in those early days, they were simultaneously innovating on the PC for as long as the format existed. And it was Western companies that were pushing this graphical revolution. By the time Gears of War 3 came out, nothing in Japan could match it visually, and that country's industry has not, to date, caught up. Helping Hand. Amazon. Project “Post Mortem” Review Questions. Subscribe to Free Updates & get this plus 14 more PDFs & podcast in one download. 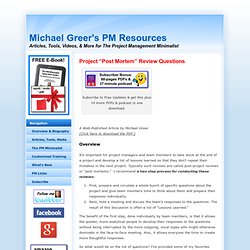 A Web-Published Article by Michael Greer[Click here to download the PDF.] Overview It’s important for project managers and team members to take stock at the end of a project and develop a list of lessons learned so that they don’t repeat their mistakes in the next project. Typically such reviews are called post-project reviews or “post mortems.” I recommend a two step process for conducting these reviews: First, prepare and circulate a whole bunch of specific questions about the project and give team members time to think about them and prepare their responses individually.Next, hold a meeting and discuss the team’s responses to the questions. So what would be on the list of questions? General Questions Are you proud of our finished deliverables (project work products)? Phase-Specific Questions (These will differ from project to project, depending on the life cycle/phases.

The Project Postmortem. Game Development Postmortems. The Making of my First Game - A mini Post-Mortem. Overview of the projectDevelopping the first version of HyperSpace Shooter was a 4 months process in all. 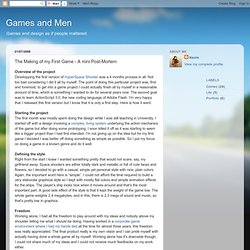 Not too bad considering I did it all by myself. The point of doing this particular project was, first and foremost, to get into a game project I could actually finish all by myself in a reasonable amount of time, which is something I wanted to do for several years now. The second goal was to learn ActionScript 3.0, the new coding language of Adobe Flash. I'm very happy that I released this first version but I know that it is only a first step. Here is how it went. Starting the projectThe first month was mostly spent doing the design while I was still teaching in University.

Defining the styleRight from the start I knew I wanted something pretty that would not scare, say, my girlfriend away. FreedomWorking alone, I had all the freedom to play around with my ideas and nobody above my shoulder telling me what I should be doing.