Welcome to Applied Game Design! Everything You’ll Ever Need To Know About Gamification. Editor’s note: Tadhg Kelly is a game designer with 20 years experience. 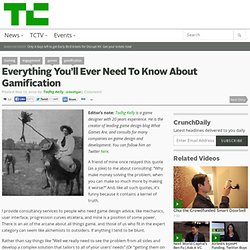 He is the creator of leading game design blog What Games Are, and consults for many companies on game design and development. You can follow him on Twitter here. A friend of mine once relayed this quote (as a joke) to me about consulting: “Why make money solving the problem, when you can make so much more by making it worse?” Features - 10 Game Design Process Pitfalls. If you look at which games succeed and fail critically, you will notice the outcome is generally not due to a great mechanic or a new idea, but from competent execution from the moment of boot-up to the end credits.

Countless games such as , , and present the player with innovative concepts but fall apart when it comes to filling up the 10-15 hours of gameplay. On the other hand, you have games such as , which brings almost nothing new to the table, but excels greatly when it comes to pacing and level structure -- keeping the player hooked throughout the entire experience. Even games considered to be innovative -- or -- would not have had their success were it not for superb execution. Card Design Commandments. Post by: Grant Rodiek I have a thing for card games. 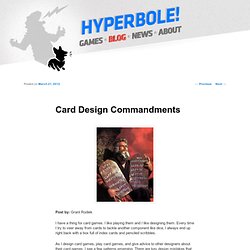 I like playing them and I like designing them. Game design, B-minus, should try harder. « #AltDevBlogADay. A few weeks ago, a friend of mine and I were talking about common clichés in games and we started listing all those funny little things that seem to make their way into lots of the video games we play. 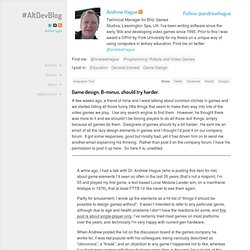 Use any search engine to find them. However, he thought there was more to it and we shouldn’t be forcing players to do all those dull things, simply because all games do them. Designers of games should try a bit harder. He sent me an email of all the lazy design elements in games and I thought I’d post it on our company forum. It got some responses, good but mostly bad, yet it has driven him on to send me another email explaining his thinking. A while ago, I had a talk with Dr. The Evolution of RPG Mechanics: From Die Rolls to Hit Volumes. » 6 Key Questions To Help Turn An Idea Into A Great Game » Farshid Palad. The 10 commandments of PC games. By Bruno Ferreira — 11:05 PM on June 13, 2011 Picture this for a second: you just unpacked the latest PlayBox 720-X blockbuster game, Gran Gears of Duty Fantasy XVIII. 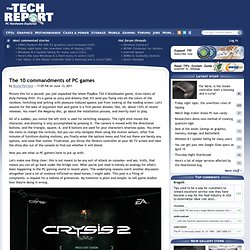 It's a game so juicy and dreamy that it'll send you flying into all the colors of the rainbow, twitching and jerking with pleasure-induced spasms just from looking at the loading screen. Let's assume for the sake of argument that said game is a first-person shooter, like, oh, about 135% of recent releases. You insert the Megaray disc, go about the installation process, and merrily start to play. All of a sudden, you notice the left stick is used for switching weapons. 8(+1/2) Simple Rules For Designing My Motion Control Game » #AltDevBlogADay.

There’s a lot of downsides to being a student – primarily that I’m working in an intense environment (3 month game developments), my time is divided between game development, research projects, and studying, and there’s no guarantee that the people I’m working with know how to act professionally. On the plus side, it means relatively risk-free development using new technology, and the chance to do some really exciting stuff – including playing with new motion-control technology.

Here’s what I’ve learned so far. Motion control: The Next Big Thing – or, at least, that’s what the last two years’ E3 shows would have you believe. While Nintendo (for once) shied away from encouraging us to leap around our living room this year, Microsoft and Sony seemed determined to ditch the traditional controller and get us all onboard with the Motion Control Revolution this year. 10 Game Design Commandments « My Simple Minded World. Implement these fundamental rules and your game will be fun to play. 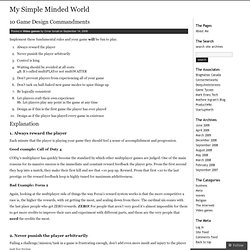 Always reward the playerNever punish the player arbitrarilyControl is kingWaiting should be avoided at all costs 4B. It’s called multiPLAYer not multiWAITERDon’t prevent players from experiencing all of your gameDon’t tack on half-baked new game modes to spice things upBe logically consistentLet players craft their own experience 8b. Let players play any point in the game at any timeDesign as if this is the first game the player has ever playedDesign as if the player has played every game in existence. The Ten Commandments of Game Design – Part 1 « Jaron's Realm. You know, I really love games. 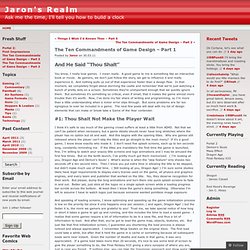 I mean really. A good game to me is something like an interactive book or movie. As gamers, we don’t just follow the story, we get to influence it and really experience it. And nothing pulls us out of that experience faster than a design flaw. In that moment, we completely forget about storming the castle and remember that we’re just watching a bunch of pretty dots on a screen. . #1: Thou Shalt Not Make the Player Wait I think it’s safe to say much of the gaming crowd suffers at least a little from ADHD.

And speaking of loading screens, I know optimizing and speeding up the game initialization process is low on the priority list since it only happens once per session, ( and again, Dragon Age! Next on the wait list is the menu animation. The 7 Commandments All Video Games Should Obey. We are here to condemn Grand Theft Auto IV, and other equally great games, not out of hatred, but out of love. 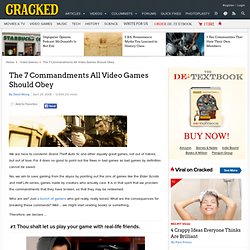 For it does no good to point out the flaws in bad games as bad games by definition cannot be saved. No, we aim to save gaming from the abyss by pointing out the sins of games like the Elder Scrolls and Half Life series, games made by creators who actually care. It is in that spirit that we proclaim the commandments that they have broken, so that they may be redeemed. Who are we? Just a bunch of gamers who got really, really bored. The No Twinkie Database! A Gamer's Manifesto. And this is years after analysts told developers that women would happily play games if they didn't feel so objectified by them, and several decades past the point where they should have even needed to be told that. 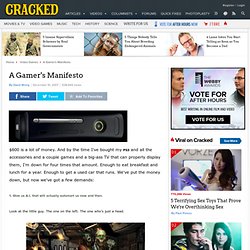 Have you guys ever met a woman? Pitfalls of the Working Game Designer: An Introduction. I hear it time and time again: “Game design must be the best job in the world. 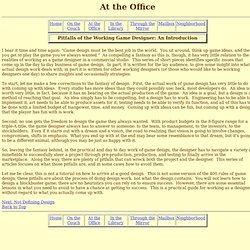 You sit around, think up game ideas, and then you get to play the game you’ve always wanted.” As compelling a fantasy as this is, though, it has very little relation to the realities of working as a game designer in a commercial studio. This series of short pieces identifies specific issues that come up in the day to day business of game design. Pitfalls in game development, inspired by Adriaan de Jongh. On Independence Day, former colleague and game design intern at W! 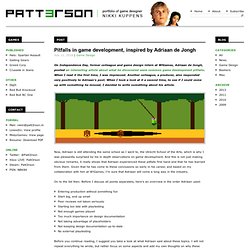 Games, Adriaan de Jongh, posted an interesting article about what he discovered were common game development pitfalls. Features - 10 Game Design Process Pitfalls. [Game designer Fisch looks into the process of making games, suggesting the ten biggest reasons why a game's production doesn't end up working out quite as hoped, and possible fixes for those issues.] If you look at which games succeed and fail critically, you will notice the outcome is generally not due to a great mechanic or a new idea, but from competent execution from the moment of boot-up to the end credits. Countless games such as Spider-Man 2, Stranglehold, and Assassin's Creed present the player with innovative concepts but fall apart when it comes to filling up the 10-15 hours of gameplay. On the other hand, you have games such as Call of Duty 4, which brings almost nothing new to the table, but excels greatly when it comes to pacing and level structure -- keeping the player hooked throughout the entire experience.

8 Things Not To Do... (Part I) « Beyond the Sword | Main | Whither Workshop? » 8 Things Not To Do... (Part I) Inspired by Troy S. Goodfellow's list of the Eight Greatest Features he values in strategy games, I started thinking about the opposite question: what are the greatest mistakes that I hate to see done over and over again in game design? The 10 most common game design mistakes. Making games is hard. Making fun of them isn’t. It’s really, really easy, actually.