How should we elect our President so that the winner represents the entire country?

EssentialElectoralCollege Ebook. In the 2020 election, democracy is on the ballot — not just Trump and Biden. I recently asked Melissa Schwartzberg, a professor of politics at NYU who specializes in democratic theory, why democracy survives in some countries and crumbles in others. 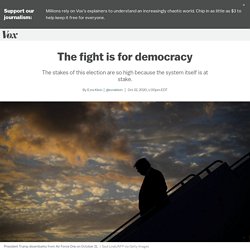 Why was I thinking about it? Oh, no reason. But her answer has been ringing in my head since. It explains much of what makes this moment in politics so distinct, so desperate. “The really important question is when do electoral losers think that it’s in their interest to go along with their defeat, and when do they think they’re better off resisting and revolting?” In American politics in 2020, both sides doubt that abiding by loss is the surest path back to power. Democrats see a political system increasingly rigged against them and the voters they represent, and they are right. It gets worse. But Republicans also see their position as desperate.

In recent months, Trump has made clear that he intends to contest the results of the election if he loses, even musing about delaying the election entirely. An Idea for Electoral College Reform That Both Parties Might Actually Like. Americans have heard for years that the Electoral College is broken—just look at the presidential elections of 2000 and 2016, when the winner earned fewer votes nationally than the loser. 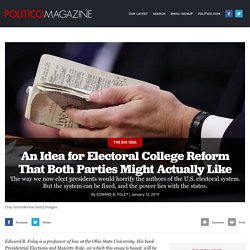 We have also heard that, despite its flaws, this system won’t change anytime soon. Republicans generally oppose a national popular vote, which would both undermine them electorally and violate the Founding Fathers’ desire for the presidency to reflect America’s federalist structure as a union of separate states. But here is an argument for Electoral College reform that might actually appeal to conservatives: Simply put, the way we currently elect presidents would horrify the early American authors of the U.S. electoral system, as defined in the 12th Amendment.

The drafters of that amendment, above all, wanted presidents to be elected according to the principle of majority rule. National Popular Vote. The Electoral College - Fairvote. Click on a topic to begin. 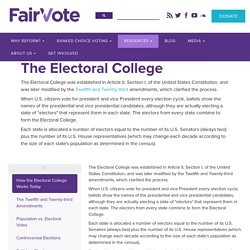 The Electoral College was established in Article II, Section I, of the United States Constitution, and was later modified by the Twelfth and Twenty-third amendments, which clarified the process. When U.S. citizens vote for president and vice President every election cycle, ballots show the names of the presidential and vice presidential candidates, although they are actually electing a slate of "electors" that represent them in each state. The electors from every state combine to form the Electoral College. 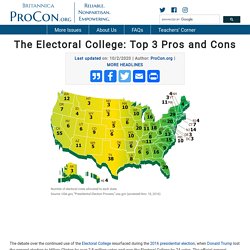 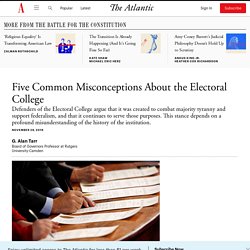 The Twelfth Amendment, adopted after the contested election of 1800, requires electors to specify for whom they are voting for president and vice president. The Twentieth Amendment, by shifting the date congressional terms begin to January 3, ensures that the newly elected House of Representatives, rather than the previous House, would elect the president if no candidate received an electoral-vote majority. And the Twenty-Third Amendment extends the right to vote in presidential elections to U.S. citizens residing in the District of Columbia, awarding the District three electoral votes, though the Electoral College continues to deny American citizens living in Puerto Rico and other U.S. territories any role in choosing the president.

Even more important have been changes in political practice.