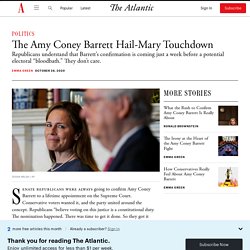 The stakes couldn’t be higher: In her first few weeks on the job, Barrett is slated to hear a case that could end up overturning the Affordable Care Act, along with a case about whether the government can require a Catholic foster-care agency to place children with same-sex couples. At 48, Barrett will be the youngest justice on the bench, cementing a 6–3 conservative majority. Over the past 50 years, three-quarters of Supreme Court justices were named by Republican presidents, and her appointment will further consolidate the conservative influence on America’s judiciary. Read: How conservatives really feel about Amy Coney Barrett. Amy Coney Barrett’s Judicial Philosophy Doesn't Hold Up to Scrutiny. Read: What the rush to confirm Amy Coney Barrett is really about And these are the easy cases. 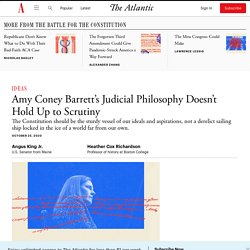 How about terms like due process? What does due mean? Is a process that locks you up for life without access to a lawyer “due”? How about an “unreasonable” search and seizure? To put it bluntly, the whole premise of originalism is nonsense in that it pretends to make the work of the Supreme Court look straightforward and mechanical, like “calling balls and strikes,” in Justice John Roberts’s famous phase. Originalism is an intellectual cloak drummed up (somewhat recently) to dignify a profoundly retrogressive view of the Constitution as a straitjacket on the ability of the federal government to act on behalf of the public. This does not mean that the Court should be totally unmoored from the text of the Constitution or the intent of the Framers and act as an unchecked super-legislature (with lifetime tenure to boot).

Conservatives Say They Want to “Protect” Women. Amy Coney Barrett Is their Perfect Messenger. Anna Moneymaker/Getty For indispensable reporting on the coronavirus crisis, the election, and more, subscribe to the Mother Jones Daily newsletter. 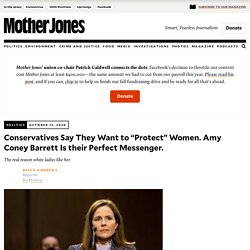 For conservatives eager to eliminate the right to abortion in this country, there is truly no one better suited to potentially trip the kill switch than Amy Coney Barrett, President Donald Trump’s nominee to fill Ruth Bader Ginsburg’s vacant Supreme Court seat. Barrett checks all the boxes—she’s an upper-middle-class, conventionally attractive white woman. She’s well educated, intelligent, accomplished, unquestionably poised. She’s a woman of faith, mother to seven children—two of whom are Black, adopted from Haiti—and she is a living, breathing example of a woman who Has It All, a mascot of suburban privilege.

'It instilled such problems': ex-member of Amy Coney Barrett's faith group speaks out. Rebekah Powers was 11 when members of her faith group, the People of Praise, gathered around as she sat on a chair and laid their hands on her to pray. 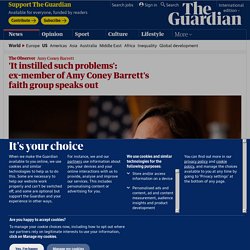 Powers’ sister had shown a gift for speaking in tongues, a defining trait of the followers of the small charismatic Christian community, and Rebekah was expected to do the same. But after what seemed like an eternity, she proved unable to produce a sound. “I couldn’t get it, and I stayed there an hour and a half before they gave up and finally said, ‘You just have blockage. You need to just work on your sin and be more open,” she said.

The 41-year-old had a rebellious spirit and left People of Praise when she turned 18. What the Rush to Confirm Amy Coney Barrett Is Really About. Read: The true victors of Trump’s Supreme Court nomination Although Barrett did her best to avoid answering direct questions this week, several exchanges with Democratic senators on gay rights, voting rights, immigration, and workplace discrimination offered a kind of flash-forward to the fireworks ahead if and when this Court strikes down legislation passed by a future Democratic president and Congress, such as a new Voting Rights Act. 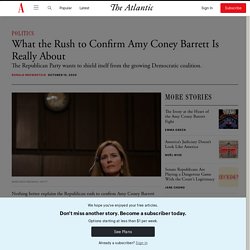 “Those decisions are only going to make the national [electoral] majority larger, fiercer, angrier,” Wilentz, the author of The Rise of American Democracy, told me. America has been here before. In the late 1850s, the newly formed Republican Party was emerging as the nation’s majority party, consolidating support in the more populous North behind a platform of opposing the spread of slavery into the nation’s Western territories.

A similar collision between a graying Court majority and a new electoral majority erupted in the 1930s.