Preliminary studies also indicate a strong connection between Trump's long string of maskless, close-contact re-election events and the recent startling increases in the numbers of everyday Americans newly diagnosed with Covid-19. 10/2/20: Trump has coronavirus. What happens now? Trump Tests Positive For Coronavirus. Trevor Reacts to Trump Getting COVID. ‘This is insanity’: Walter Reed physician among critics of Trump drive-by visit.

Donald Trump drew immediate rebuke from doctors on Sunday afternoon for an “insane” surprise drive-by visit to supporters outside the Walter Reed military medical center, where the president is being treated for an infection of Covid-19. 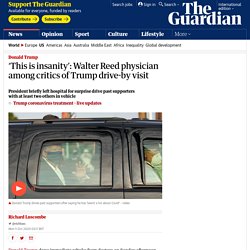 At least two other people, probably Secret Service agents, wearing respirators and eye protection, were seen on video in the vehicle accompanying Trump, who was also masked, during the short drive. James Phillips, doctor of emergency medicine at George Washington University, who is an attending physician at Walter Reed, called the stunt “insanity”. “Every single person in the vehicle during that completely unnecessary Presidential ‘drive-by’ just now has to be quarantined for 14 days. They might get sick. They may die,” he wrote in a tweet. “For political theater. 10/4/20: Trump’s Doctor Misleads Public. This is not Dr. 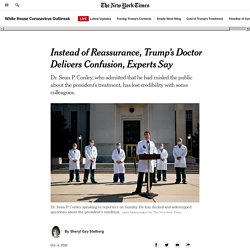 Conley’s first brush with controversy. In May, after the president announced that he was taking hydroxychloroquine, an anti-malaria drug that Mr. Trump was promoting without evidence as a way to prevent coronavirus infection, Dr. Conley released a letter in which he said he had “concluded the potential benefit from treatment outweighed the relative risks.” He later said the president had completed the treatment “safely and without side effects.” And in November, Dr. Dr. In May 2018, Mr. It is ordinarily a low-profile job. Dr. James Phillips's reaction to Trump ordering Secret Service to unnecessarily risk their lives.

Trump's Appears to Sign Blank Paper in Staged Photo-Op at Walter Reed. President Donald Trump was seen in a photo taken at Walter Reed National Military Medical Center apparently signing a blank piece of paper with a marker, further questioning the credibility of the White House when it comes to news about the president's health. 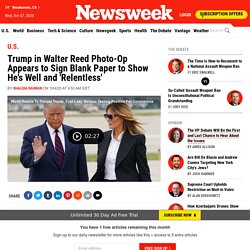 The White House on Saturday night released pictures of the president working at the hospital, where he remained for a second night after he and first lady Melania Trump both tested positive for the coronavirus. Ivanka Trump, the president's daughter and a senior aide, shared one the pictures on her Twitter page, adding: "Nothing can stop him from working for the American people. RELENTLESS! " But Jon Ostrower, the editor-in-chief of an aviation publication, also took to Twitter to note that the data embedded in two pictures of the president—showing him working in different rooms—were taken just 10 minutes apart. Trump takes off mask as he returns to White House. Mr. Trump Can't Breathe (because he has the Trump Virus) Don’t cry for my White House staffer. Does Trump's Health Impact our National Security? 10/5/20: Don Jr. Thinks Trump Is Acting Crazy. According to sources, Don Jr. has told friends that he tried lobbying Ivanka Trump, Eric Trump, and Jared Kushner to convince the president that he needs to stop acting unstable. 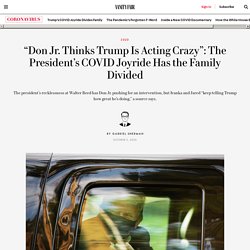 “Don Jr. has said he wants to stage an intervention, but Jared and Ivanka keep telling Trump how great he’s doing,” a source said. Don Jr. is said to be reluctant to confront his father alone. “Don said, ‘I’m not going to be the only one to tell him he’s acting crazy,’” the source added. One area where the family seems united is over the president’s manic tweeting early Monday morning. 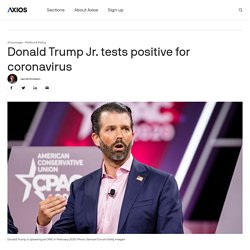 Why it matters: His diagnosis adds to the list of people associated with President Trump who have been infected by the virus, including the president himself. Trump Jr. is abiding by all medically recommended COVID-19 guidelines, his spokesperson said. Zoom out: Also on Friday, Rudy Giuliani’s son Andrew Giuliani — a White House aide — announced he had tested positive. Key members of the president's outside legal team were unable to attend a meeting with Michigan lawmakers because of their exposure, Axios' Jonathan Swan reported.

11/20/20: White House aide Andrew Giuliani tests positive for COVID-19. 11/6/20: 6 in White House, Including Trump’s Chief of Staff, Have Covid-19. Six White House aides and a Trump campaign adviser — including Mark Meadows, President Trump’s chief of staff — have contracted the coronavirus, officials said, raising fears of another outbreak sweeping through the ranks of the nation’s top officials as cases surge to record levels in the country. 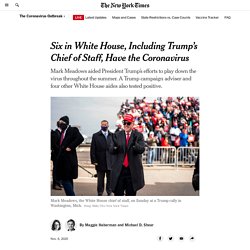 Mr. Meadows, who routinely shrugged off the need to wear masks and embraced Mr. Trump’s strategy of playing down the threat from the coronavirus over the summer, informed a small group of White House advisers that he had tested positive for the virus on Wednesday, a senior administration official said late Friday.

Five other White House officials also tested positive for the virus in the days before and after Election Day, people familiar with the diagnoses told The New York Times. Bloomberg News also reported on additional cases around the president, who contracted the virus last month and spent three days in the hospital receiving experimental treatments. A few weeks ago, Mr. Mr. Dr. Mr. Mr. 10/14/20: First Lady Melania Trump: ‘My personal experience with COVID-19’ It was two weeks ago when I received the diagnosis that so many Americans across our country and the world had already received—I tested positive for COVID-19. 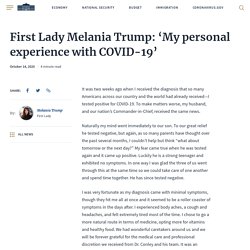 To make matters worse, my husband, and our nation’s Commander-in-Chief, received the same news. Naturally my mind went immediately to our son. To our great relief he tested negative, but again, as so many parents have thought over the past several months, I couldn’t help but think “what about tomorrow or the next day?” My fear came true when he was tested again and it came up positive. Luckily he is a strong teenager and exhibited no symptoms. I was very fortunate as my diagnosis came with minimal symptoms, though they hit me all at once and it seemed to be a roller coaster of symptoms in the days after.

Recovering from an illness gives you a lot of time to reflect. It also cheered me to think of all the people I have met across our country and the world—and the goodness and compassion that exists if you seek it out. White House Staff With COVID-19: Full Updated List. President Trump and the First Lady are both reportedly experiencing mild symptoms. 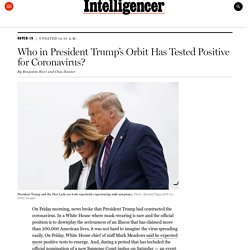 Photo: Mandel Ngan/AFP via Getty Images On Friday morning, news broke that President Trump had contracted the coronavirus. In a White House where mask-wearing is rare and the official position is to downplay the seriousness of an illness that has claimed more than 200,000 American lives, it was not hard to imagine the virus spreading easily. 10/2/20: 11 positive coronavirus tests in Cleveland tests traced to presidential debate. At least 11 positive coronavirus tests can be traced to members of the media or organizers of this week's presidential debate in Cleveland, city and clinic officials said Friday. 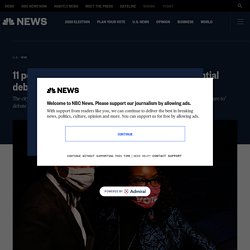 The city's announcement came after President Donald Trump, who debated Democratic rival Joe Biden on Tuesday in Cleveland, revealed he and his wife have both tested positive for Covid-19 and are in isolation. Trump was transported to Walter Reed National Military Medical Center on Friday. "The City of Cleveland is aware of positive cases of Covid-19 following the Sept. 29 presidential debate," according to a City Hall statement. "We advise anyone who has come in contact with someone who has tested positive to selfquarantine. If anyone who was in attendance has concerns or is symptomatic, they should contact their healthcare provider.

" "Based on what we know about the virus and the safety measures we had in place, we believe there is low risk of exposure to our guests," the Cleveland Clinic said in a statement. Trump sought to keep COVID-19 diagnosis secret Thursday as he awaited 2nd test result. All The Places Trump Went This Week While Possibly Contagious. Maskless Mike Lee hugs guests at White House event. Presidential Health - If You Don’t Know, Now You Know.