The Man In The Background. In 1985, Barack Obama moved to Chicago, a city he didn’t know, hoping to create change. 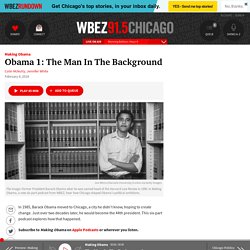 Just over two decades later, he would become the 44th president. This six-part podcast explores how that happened. Subscribe to Making Obama on Apple Podcasts or wherever you listen. Before he reached the national stage, a young Obama worked as a community organizer on the South Side of Chicago. He was behind the scenes, working to bring jobs and better living conditions to struggling neighborhoods. This would become his first introduction to Chicago’s rough-and-tumble politics, a path that would propel him to the Illinois State House, the nation’s Capitol, and eventually the White House. This podcast, from the producers of Making Oprah, tells the story of one man’s meteoric rise to become the United States’ first African-American president. Stay up-to-date with the latest news, stories and insider events. You've signed up to receive emails. The power of rhetoric and the rhetoric of power: Exploring a tension within the Obama presidency. 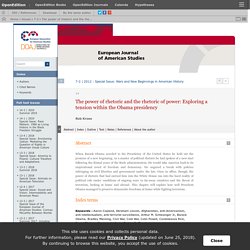 Patterson’s reflections on (...) 1Of Bill Clinton it has been said that he was America’s first black president due to his apparent affinity with America’s black population. Of Barack Obama it might be said that he is America’s first “white president of color.” From the first moment he entered public life, none of the templates that Americans use to handle the racial and ethnic diversity of their compatriots seemed to apply to Obama.

He seemed equally at ease presenting himself as a person of white origin or as the son of an immigrant from Kenya. 2 J.W. 2Obama resembles such immigrant blacks in the greater freedom of affiliation he may have felt was open to him. After Obamacare: The New Stakes of US Healthcare Policy. Alondra Nelson is a sociologist and teaches at Columbia University.

Her social and historical approach to medicine, science and technology has given rise, in particular, to a book on the health policies implemented by the Black Panthers in the 1960s and 1970s. > Body And Soul: The Black Panther Party and the Fight Against Medical Discrimination (University of Minnesota Press, 2011) Of all forms of discrimination and inequalities, injustice in health is the most shocking and inhuman… Martin Luther King, Jr., 1966 Americans of all hues expressed surprise when Barack Obama was elected four years ago (and again last month), with many candidly remarking that they never thought they would live to see the day when the United States would be led by a President of African descent. As the Obama administration’s policy priorities took shape, many thought it equally unlikely that there would be significant healthcare reform during their lifetimes. 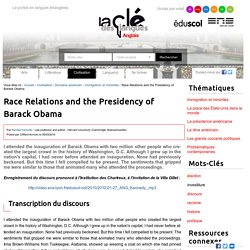 Although I grew up in the nation's capital, I had never before attended an inauguration. None had previously beckoned. But this time I felt compelled to be present. The sentiments that gripped me were similar to those that animated many who attended the proceedings. Immigration to the United States of America: Current Challenges and Debates. Please note: an asterisk (*) refers to an entry in the accompanying glossary. 1. 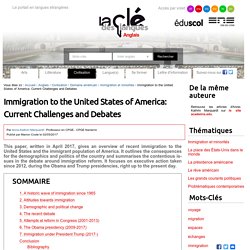 A historic wave of immigration since 1965 The current immigration system of the United States is mostly based on a law passed in 1965, the Immigration and Nationality Act, otherwise known as the Hart-Celler Act – one of a series of measures contributing to President Lyndon B. Johnson’s project of a “Great Society”. Under the previous system, immigration had been regulated by quotas based on nationality, the aim being to favor white immigrants from European countries. All men are created equal? Barack Obama and the American Revolution.

Télécharger le Power Point de Steven Sarson [PDF] Introduction This presentation is about the language Barack Obama uses as well as his interpretation of American history. 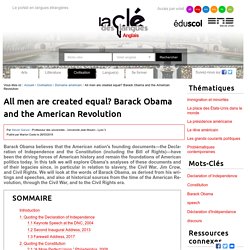 I will try to show how he uses language to reinforce historical interpretation in a way that is very clever and that you would not get with his successor. What we see through Obama is an interpretation of American history that presents the American Revolution as something that is not finished yet, but has been ongoing since the Revolution itself. The Unmet Goals of Obama's White House - Video - NYTimes.com.

A reflection on Barack Obama’s presidency - Barack Obama. The Fragile Legacy of Barack Obama. Barack Obama: Foreign Affairs. Iraq and Afghanistan In addition to inheriting an economy in crisis when he took office, President Obama inherited two wars, one in Iraq and the other in Afghanistan. An early opponent of President George W. Bush’s decision to invade Iraq in 2003, Obama promised during the 2008 election campaign to withdraw American troops as soon as possible. In February 2009, he announced a plan to bring troop levels down from 160,000 to 50,000 by August 2010, including the removal of all combat forces.

Barack Obama: Domestic Affairs. Barack Obama: Campaigns and Elections. Barack Obama: Life Before the Presidency. Barack Hussein Obama II was born on August 4, 1961, in Hawaii. His parents, who met as students at the University of Hawaii, were Ann Dunham, a white American from Kansas, and Barack Obama Sr., a black Kenyan studying in the United States. Obama's father left the family when Obama was two and, after further studies at Harvard University, returned to Kenya, where he died in an automobile accident nineteen years later. After his parents divorced, Obama's mother married another foreign student at the University of Hawaii, Lolo Soetoro of Indonesia. From age six through ten, Obama lived with his mother and stepfather in Indonesia, where he attended Catholic and Muslim schools.

“I was raised as an Indonesian child and a Hawaiian child and as a black child and as a white child,” Obama later recalled. Obama left Hawaii for college, enrolling first at Occidental College in Los Angeles for his freshman and sophomore years, and then at Columbia University in New York City.