THE WORLD'S BEST CHICKEN. Such a bold claim! 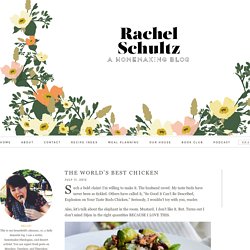 I’m willing to make it. The husband raved. My taste buds have never been so tickled. Others have called it, “So Good it Can’t Be Described, Explosion on Your Taste Buds Chicken.” Seriously, I wouldn’t toy with you, reader. Also, let’s talk about the elephant in the room. THE WORLD’S BEST CHICKENServes 3-4 4 boneless, skinless chicken breasts 1/2 cup Dijon mustard 1/4 cup maple syrup 1 tablespoon red wine vinegar Salt & pepper Fresh rosemary Preheat oven to 425 degrees. Place chicken breasts into 9×13 lined baking dish. Bake for 30-40 minutes, or until meat thermometer reads 165 degrees. Season with fresh rosemary. For everyone who has kindly inquired, here is the recipe for the side dish pictured in these photos: pan-seared brussels sprouts with cranberries & pecans. PS: To make this in the slow cooker, combine all ingredients and cook on low for 3-4 hours.

Preheat oven to 425 degrees. Adapted from Trader Joe’s Cookbook. Slow Cooker Honey Sesame Chicken - The Gunny Sack. Sweet and Spicy Paleo Chicken Fingers. In the off chance that you can’t tell by the picture, I’ll say it here, “these sweet and spicy paleo chicken fingers are amazing.” 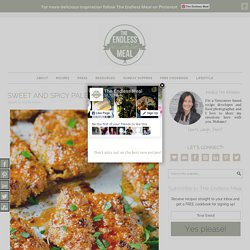 Wait … paleo? Yep, you heard right. The chicken is coated in an almond meal (aka almond flour) crust that is both 100% paleo and gluten free. After a bake in the oven it’s dunked in a deliciously sticky sweet and spicy sauce. Super Easy Tandoori Chicken. Man, oh man, this chicken dish is easy and delicious! 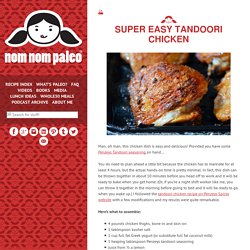 Provided you have some Penzeys Tandoori seasoning on hand… You do need to plan ahead a little bit because the chicken has to marinate for at least 4 hours, but the actual hands-on time is pretty minimal. In fact, this dish can be thrown together in about 10 minutes before you head off to work and it will be ready to bake when you get home. (Or, if you’re a night shift worker like me, you can throw it together in the morning before going to bed and it will be ready to go when you wake up.)

I followed the tandoori chicken recipe on Penzeys Spices website with a few modifications and my results were quite remarkable. Here’s what to assemble: 4 pounds chicken thighs, bone-in and skin-on1 tablespoon kosher salt1 cup full fat Greek yogurt (or substitute full fat coconut milk)1 heaping tablespoon Penzeys tandoori seasoningJuice from ½ a lemon1 tablespoon coconut oil or fat of choice Here’s what to do: Once the marinade is ready… The Paleo Kitchen's Honey Mustard Chicken Thighs.

Unless you’ve been living underground (like a good cave-person should!) 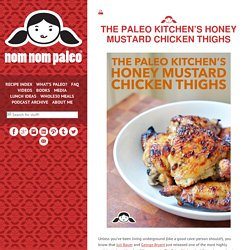 , you know that Juli Bauer and George Bryant just released one of the most highly anticipated cookbooks of the summer, The Paleo Kitchen. And if you know about this extraordinary book, then I’m sure you’ve already scooped up a copy—and helped it debut on the New York Times best sellers list! It’s difficult for me to be objective about The Paleo Kitchen because I’m pals with George and Juli. In person, they’re exactly how you picture them from their respective blogs: Juli is smart, sassy, and funny, and George is savvy, passionate, and loyal. Together, their Wonder Twin powers activate like nobody’s business, and you can see this in their exceptional cookbook.

While George and Juli are renowned for their Paleo treats (and yes, those are pancakes on the cover of their book), don’t be fooled into thinking that The Paleo Kitchen is nothing but desserts and grain-free baked goods. Here’s what to gather to serve 4 people: Zenbelly's Pan-Roasted Chicken with Bacon and... Simone Miller cooks food that I crave: farm-to-table dishes that both satisfy on busy weeknights and impress at weekend dinner parties. 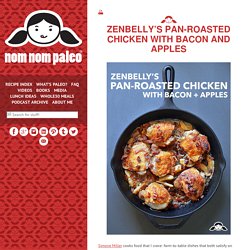 I first fell head over heels for Simone’s cooking at a Pop-up Paleo dinner a couple of years ago. Her spot-on flavor combinations and skillful execution were impressive—and the No Joke Dark Chocolate Cake she served for dessert instantly became my go-to indulgence. When we were planning our January cookbook launch party, the first and best decision we made was to hire Simone as our caterer. Even if the party had been a dud (thankfully, it wasn’t!) , we knew her food would be a slam-dunk.

But until I can afford to have Simone cook all our meals, I guess I’ll have to settle for cooking my way through her fabulous new tome, The Zenbelly Cookbook. Lately, I’ve found myself making one recipe in particular from The Zenbelly Cookbook over and over again. Whole30 Day 28: Chile Lime Chicken Wings. A confession: I’m not much of a football fan. 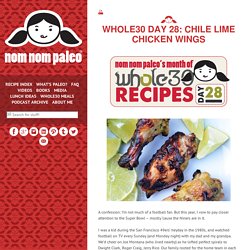 But this year, I vow to pay closer attention to the Super Bowl – mostly ‘cause the Niners are in it. I was a kid during the San Francisco 49ers’ heyday in the 1980s, and watched football on TV every Sunday (and Monday night) with my dad and my grandpa. We’d cheer on Joe Montana (who lived nearby) as he lofted perfect spirals to Dwight Clark, Roger Craig, Jerry Rice. Our family rooted for the home team in each of their five Super Bowl victories – and why not?

I mean, who could possibly root against players who recorded songs like this? Asian Lemon Chicken Tenders. A wonderful asian twist to your favorite chicken tenders, tossed in the most heavenly sweet, lemon glaze! 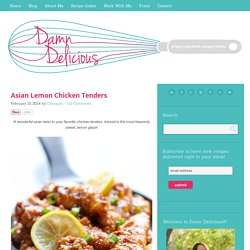 Remember those chicken tenders that you had as a child? Those thick, crisp strips of chicken that you’d dunk in ketchup? Well this is pretty much just like that, except it’s a million times better. And there’s no ketchup involved. Instead, these babies are slathered in the most amazing, sweet and tangy lemon glaze – a glaze so good, you’ll want to drink it! Slow Cooker Coconut Curry Chicken. The first time I ever tasted curry was shortly after Brett and I got married. 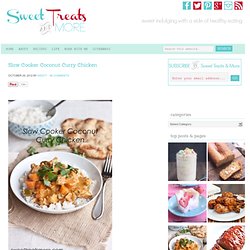 For a date night we went with some good friends for a scenic fall drive through the Alpine Loop (if you live in Utah, you know how beautiful the Alpine Loop is!). We planned to grab a bite at a new burger joint afterwards but by the time we got back it was late, the burger joint was closed, and we were starving. Our friends talked us in to trying a Thai restaurant that was nearby and happened to be open late (Kellie, do you remember this?). Pomegranate-Cranberry Chicken. Pomegranate juice and cranberries. 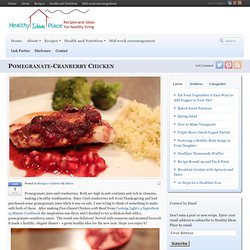 Both are high in anti-oxidants and rich in vitamins, making a healthy combination. Since I had cranberries left from Thanksgiving and had purchased some pomegranate juice when it was on sale, I was trying to think of something to make with both of these. Sweet and Sticky Pomegranate Chicken. So I know we have this thing in like, three days… this day where we eat a ton of food, but the thing is? 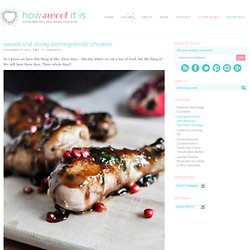 We still have three days. Three whole days!! Says my impatient inner five-year old. And apparently we need to do normal things like eat actual food for meals while we discuss gravy and mashed potatoes and stuffing and whatnot. I mean, do we really need to eat dinner tonight? Probably won’t happen. But this totally can happen.

Honey Porter Glazed Chicken Skewers. I have two very distinct sides to my personality, dueling forces that pull me in opposing directions with near cartoon ideation. Although Devil and Angel would be easier to deal with, mine are more Old Lady and Free Spirited Gypsy. As much as I would like to tell you that Gypsy wins the battles, it’s Old Lady that tends to run the show. A few years ago Gypsy got ahold of the controls and decided to buy a motorcycle. Paying penance to Old Lady, I singed up for a Motorcycle Riders Training Course. It was a three day crash course (pun intended) in how to ride a motorcycle without killing yourself.

Chicken Parmesan Recipe, Recipes with Chicken. How to Cook a Whole Chicken in a Slow Cooker. This chicken could be your dinner, and it won’t require slaving in the kitchen all day. Promise. Photos via CakeSpy All you need is about ten minutes to prep, and then you can let your slow cooker do the rest of the cooking for you. This is the art of cooking a whole chicken in a slow cooker. Oh so yummy chicken bake. This is a clean recipe that is super simple and super yummy. The whole family will love the variety in this bake. Garlic Brown Sugar Chicken. Friday, February 24, 2012 Garlic Brown Sugar Chicken* Considering how well y’all took to me re-blogging the Fire Roasted Tomato Basil Soup, I decided to proclaim this week throwback week. So far I have managed to watch season one of Buffy, drink a Sonic Oceanwater with vodka (helloooo highschool, err ummm college), and listened to as many boy bands as Pandora could dish up.

Because of that, I now have LFO and Soul Decision back on my iphone. It’s pretty embarrassing since I am probably one of the only people who still remembers all the words… New Kids On The block had a bunch of hits, Chinese food makes me sick and I think it’s fly when girls stop by for the summer, for the summer. General Tso’s Chicken. Honey Sesame Chicken. General Tso's Chicken. Skinny Orange Chicken Recipe.

Slow Cooker Lemongrass and Coconut Chicken... Skinny Slow Cooker Balsamic Chicken by Becky’s Best Bites. Easy Recipe for Baked Pesto Chicken. Crockpot Orange Chicken Recipe in Crockpot Recipe, Main Courses Sides, Recipes. On the hunt for another tasty Crockpot Meal?? 12-Minute Chicken and Broccoli. BETTER-THAN-TAKEOUT CHICKEN FRIED RICE. Here is my version of this classic dish – not that I have any claim to being an authority on what is “authentic” Chinese food. I am an authority, however, on what is super incredibly yummy. This rice gets my stamp of approval, with honors. It is better than takeout, and you can enjoy skipping all the mysterious, unhealthy parts of fast food. Hemp-Crusted Baked Chicken Tenders. Slow Cooker Honey Garlic Chicken Recipe.