RPG cards. The Jedi Editing Technique, or These Aren’t The Words You’re Looking For. “Anyone else think passive constructions are cool?” 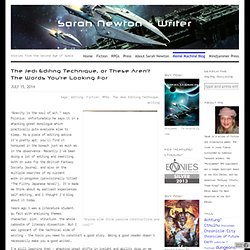 “Brevity is the soul of wit,” says Polonius. Unfortunately he says it in a whacking great monologue which practically puts everyone else to sleep. As a piece of editing advice it’s pretty apt; you’ll find it honoured in the breach just as much as in the observance. Recently I’ve been doing a lot of editing and rewriting, both on subs for the British Fantasy Society Journal, and also on the multiple rewrites of my current work-in-progress (provisionally titled “The Filthy Japanese Novel”).

It’s made me think about my earliest experiences self-editing, and I thought I’d blog about it today. Years ago I was a literature student, au fait with analysing themes, character, plot, structure, the whole caboodle of literary dissection. I’m still learning that – whacking great shifts in insight and ability drop on me regularly.

In On Writing, Stephen King says the formula for writing success is “second draft = first draft minus 10%”. The 100:10:1 method – the heart of my game design process. This is the first post of a series on practical game-design techniques. 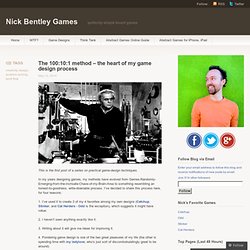 In my years designing games, my methods have evolved from Games-Randomly-Emerging-from-the-Inchoate-Chaos-of-my-Brain-Area to something resembling an honest-to-goodness, write-downable process. I’ve decided to share this process here, for four reasons: 1. I’ve used it to create 3 of my 4 favorites among my own designs (Catchup, Stinker, and Cat Herders - Odd is the exception), which suggests it might have value. 2. 3. Open Courses — Education. Online. Free. Seth Priebatsch: The game layer on top of the world. Jane McGonigal: Gaming can make a better world. Jane McGonigal: The game that can give you 10 extra years of life.

Jane McGonigal: Massively multi-player… thumb-wrestling? Fate Misconceptions and Aspect Spamming. There are a couple things I’ve seen pop up again in the Fate community, which seems to pop up as new people discover Fate. 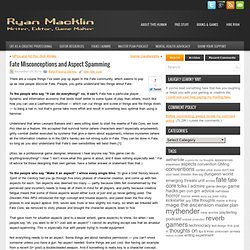 People, you gotta understand two things about Fate: To the people who say “It can do everything!” No, it can’t. Fate has a particular player dynamic and information economy that lends itself better to some types of play than others, much like how you can use a Leatherman multitool — which can cut things and screw in things and file things down — to bang a nail in, but that’s gonna take more effort and result in something less optimal than using a hammer. Understand that when Leonard Balsera and I were sitting down to start the rewrite of Fate Core, we took this idea as a feature. (Also, as a professional game designer, whenever I hear anyone say “this game can do anything/everything!”

To the people who say “Make it an aspect!” That gave room for situation aspects (and to a lesser extent, game aspects) to shine. Not everything needs to be an aspect. . - Ryan P.S. Borejko: Zarobki z pisania o grach. Było już skrótowo w pierwszej części, zatem dziś trochę rozwleklej. 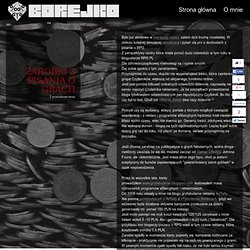 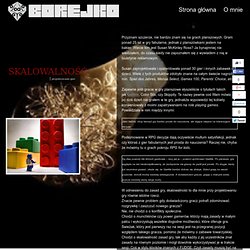 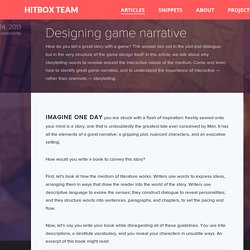 It has all the elements of a great narrative: a gripping plot, nuanced characters, and an evocative setting. How would you write a book to convey this story? First, let’s look at how the medium of literature works. Writers use words to express ideas, arranging them in ways that draw the reader into the world of the story. Writers use descriptive language to evoke the senses; they construct dialogue to reveal personalities; and they structure words into sentences, paragraphs, and chapters, to set the pacing and flow. Structured RPGs. Sharing this from twitter, since it's easier to respond to these things when you aren't restricted by 140 characters. 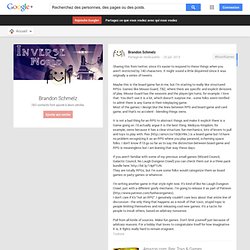 It might sound a little disjointed since it was originally a series of tweets. Maybe this is the board game fan in me, but I'm starting to really like structured RPGs. Games like Mouse Guard, TBZ, where there are specific and explicit divisions of play. Mouse Guard has the seasons and the player/gm turns, for example. I love that. It is not a bad thing for an RPG to abstract things and make it explicit there is a Game going on. The Alexandrian » Jaquaying the Dungeon. I believe that dungeons should always be heavily jaquayed. 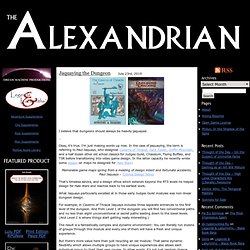 Okay, it’s true. I’m just making words up now. In the case of jaquaying, the term is referring to Paul Jaquays, who designed Caverns of Thracia, Dark Tower, Griffin Mountain, and a half dozen other old school classics for Judges Guild, Chaosium, Flying Buffalo, and TSR before transitioning into video game design. In the latter capacity he recently wrote some essays on maps he designed for Halo Wars: Memorable game maps spring from a melding of design intent and fortunate accidents.