Collective+intelligence. People power transforms the web in next online revolution. In July 2004, US cinema advertisements for Halo 2, the science fiction computer game, briefly carried the address for a website - ilovebees.com - which appeared to belong to a beekeeper who had mysteriously disappeared. 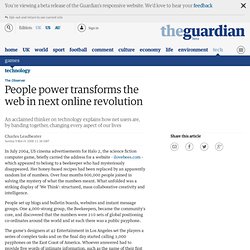 Her honey-based recipes had been replaced by an apparently random list of numbers. Over four months 600,000 people joined in solving the mystery of what the numbers meant. What unfolded was a striking display of 'We Think': structured, mass collaborative creativity and intelligence. People set up blogs and bulletin boards, websites and instant message groups.

One 4,000-strong group, the Beekeepers, became the community's core, and discovered that the numbers were 210 sets of global positioning co-ordinates around the world and at each there was a public payphone. The game's designers at 42 Entertainment in Los Angeles set the players a series of complex tasks and on the final day started calling 1,000 payphones on the East Coast of America. Collaboration Tools. HackerspaceWiki. Hackerspaces are community-operated physical places, where people can meet and work on their projects. 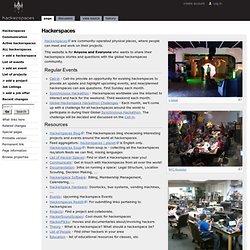 This website is for Anyone and Everyone who wants to share their hackerspace stories and questions with the global hackerspaces community. Regular Events Call-in - Call-ins provide an opportunity for existing hackerspaces to provide an update and highlight upcoming events, and new/planned hackerspaces can ask questions. First Sunday each month. Synchronous Hackathon - Hackerspaces worldwide use the internet to interact and hack for the weekend. Resources Hackerspaces Blog: The Hackerspaces blog showcasing interesting projects and events around the world at hackerspaces. Hackerspace. Activities[edit] Many hackerspaces participate in the use and development of free software, open hardware, and alternative media. 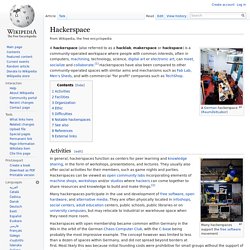 They are often physically located in infoshops, social centers, adult education centers, public schools, public libraries or on university campuses, but may relocate to industrial or warehouse space when they need more room. Hackerspaces with open membership became common within Germany in the 90s in the orbit of the German Chaos Computer Club, with the C-base being probably the most impressive example. The concept however was limited to less than a dozen of spaces within Germany, and did not spread beyond borders at first. Most likely this was because initial founding costs were prohibitive for small groups without the support of a large organization like the CCC.

In 2006, Paul Bohm came up with a fundraising strategy based on the Street Performer Protocol to build Metalab in Vienna, Austria, and became its founding director. Facilities[edit] Organization[edit] Edistorm. Dvb channel scanner directshow - Freelancer.co.nz. 7 Tactics for Open Innovation. The last decade has seen the rise of collaboration as a by-word for innovation success. 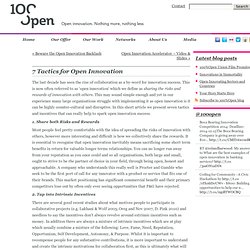 This is now often referred to as ‘open innovation’ which we define as sharing the risks and rewards of innovation with others. This may sound simple enough and yet in our experience many large organisations struggle with implementing it as open innovation is it can be highly counter-cultural and disruptive. In this short article we present seven tactics and incentives that can really help to spark open innovation success. 1. Share both Risks and Rewards Most people feel pretty comfortable with the idea of spreading the risks of innovation with others, however more interesting and difficult is how we collectively share the rewards. 2. There are several good recent studies about what motives people to participate in collaborative projects (e.g. 3. Whilst open innovation is ultimately about creating new value better, cheaper and faster, don’t mistake this for getting something for nothing.

Project collaboration. 5pm - Project management, task organizer, team collaboration and. ProjectPier.org. Project2Manage - Free Project Management. Online Project Planning, Collaboration and Task Management Softw. Project Management Software, Project Planning Software, Time Tra. Thinklinkr. Lumifi Detailed Overview - Lumifi on blip.tv. Lumifi. A Singular Creation - Art Community - Art Contests and Opportuni. Out of Control is a summary of what we know about self-sustaining systems, both living ones such as a tropical wetland, or an artificial one, such as a computer simulation of our planet. 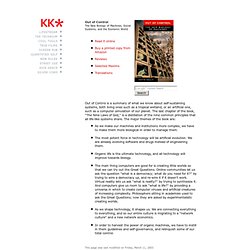 The last chapter of the book, "The Nine Laws of God," is a distillation of the nine common principles that all life-like systems share. The major themes of the book are: As we make our machines and institutions more complex, we have to make them more biological in order to manage them.The most potent force in technology will be artificial evolution. We are already evolving software and drugs instead of engineering them.Organic life is the ultimate technology, and all technology will improve towards biology.The main thing computers are good for is creating little worlds so that we can try out the Great Questions. Online communities let us ask the question "what is a democracy; what do you need for it?