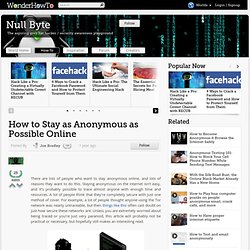 Staying anonymous on the internet isn't easy, and it's probably possible to trace almost anyone with enough time and resources. A lot of people think that they're completely secure with just one method of cover. For example, a lot of people thought anyone using the Tor network was nearly untraceable, but then things like this often cast doubt on just how secure these networks are. Unless you are extremely worried about being traced or you're just very paranoid, this article will probably not be practical or necessary, but hopefully still makes an interesting read. Anonymity Networks There are several networks to choose from, the 3 most popular being Tor, FreeNet and I2P (Invisible Internet Project). In places where no anonymity networks are available, a circumventor can be used as a simple but less secure substitute. 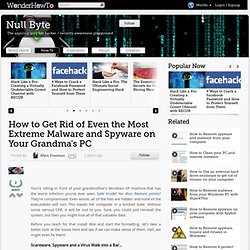 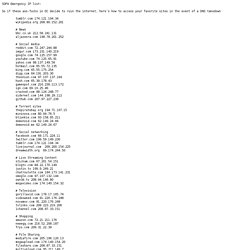 The Hack FAQ: Password Basics. This section deals with the basics regarding passwords. 4.1 What are some password basics? 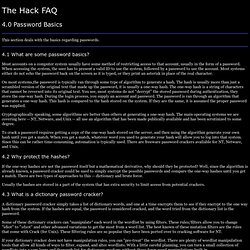 Most accounts on a computer system usually have some method of restricting access to that account, usually in the form of a password. When accessing the system, the user has to present a valid ID to use the system, followed by a password to use the account. Most systems either do not echo the password back on the screen as it is typed, or they print an asterisk in place of the real character. On most systems,the password is typically ran through some type of algorithm to generate a hash. Cryptographically speaking, some algorithms are better than others at generating a one-way hash. Great apps for defeating hackers. One candidate allegedly told a hiring manager that he would do anything for a job -- even if that meant committing a crime, according to CareerBuilder.com. iStockphoto (MoneyWatch) It's a dangerous world out there for computer users, with hackers constantly on the prowl for ways to steal passwords, penetrate networks or read people's emails. 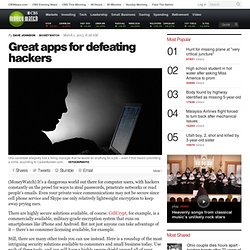 Even your private voice communications may not be secure since cell phone service and Skype use only relatively lightweight encryption to keep away prying ears. There are highly secure solutions available, of course. CellCrypt, for example, is a commercially available, military-grade encryption system that runs on smartphones like iPhone and Android. But not just anyone can take advantage of it -- there's no consumer licensing available, for example. Still, there are many other tools you can use instead. How to Commit Internet Suicide and Disappear from the Web Forever. Free VPN for iPhone, Android, Mac and Windows for secure and private browsing, accessing blocked sites and unblocking Facebook and Youtube - Hotspot Shield. Five Ways to Download Torrents Anonymously. Which VPN Providers Really Protect Your File Sharing Activities? 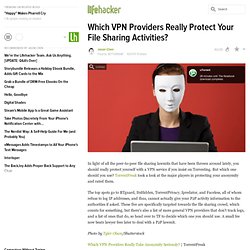 You do realize VPNs have legitimate and legal uses right? Same goes for bittorent and p2p sharing — you can in fact use those services completely and entirely in a legal way. Well done internet police. Glad you felt the need to scold Lifehacker. Yes, but if you look at the article, it specifically mentions the lawsuits. @dunehunter. How to Completely Anonymize Your BitTorrent Traffic with BTGuard.

Is Usenet Safer than BitTorrent? Shhh... 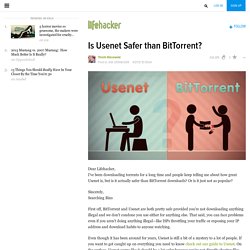 Stick to bittorrent kid. Usenets the devil and I highly recommend against it. Geez. Thanks for the unneeded publicity. Which VPN Providers Really Take Anonymity Seriously? As detailed in yesterday’s article, if a VPN provider carries logs of their users’ activities the chances of them being able to live up to their claim of offering an anonymous service begins to decrease rapidly. 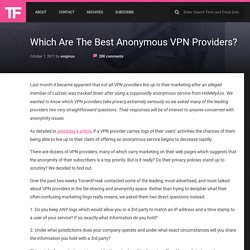 There are dozens of VPN providers, many of which carry marketing on their web pages which suggests that the anonymity of their subscribers is a top priority. But is it really? Do their privacy policies stand up to scrutiny? We decided to find out. Over the past two weeks TorrentFreak contacted some of the leading, most-advertised, and most talked about VPN providers in the file-sharing and anonymity space. 1. 2. Your Clever Password Tricks Aren't Protecting You from Today's Hackers. Browse Like Bond: Use Any Computer Without Leaving a Trace with Tails. How Can I Prevent My ISP from Tracking My Every Move? Enable These Two Features Now for a More Secure LastPass. Five Things You Should Know to Keep the Man from Snooping on Your Digital Stuff.

"Think of it it like leaving your doors and windows open and complaining when someone looks inside. 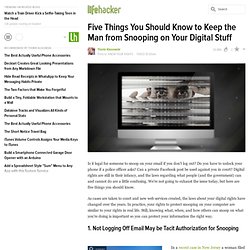 " I find this to be an iffy comparison. I understand what you guys are trying to explain but it misrepresents the problem. I'm entitled to leave my windows and doors of my house open, if someone steps onto my property to have a look without my permission than in most countries that's trespassing. If they were trying to take a peek from the sidewalk then sure, by all means, go ahead. It largely depends on what the guy accessed or not. If he saw it was open and decided to take a look and didn't delve into any emails, send any or whatever then sure, I can live with that, if he merely just looked at the page that was already being displayed. But if he went inside individual emails, started reading them etc, I find that should be comparable to going into someone's mailbox and opening up the letters, which is a federal crime. Plenty to Hide. From Saucy Pics to Passwords: How to Share Sensitive Information Over the Internet. Set Up an Automated, Bulletproof File Back Up Solution.

How to Track Down Anyone Online. Do I Really Need To Encrypt Every File on My Computer? How to Unlock a Computer Without a Password Reset Disk. The PC Repair Toolkit in your Pocket: Boot CD on a USB Stick. It has been around for a long time, but I still know a lot of techs who don’t know about it. 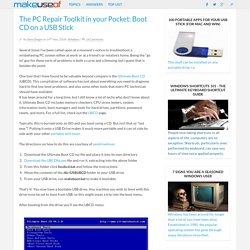 Ultimate Boot CD includes memory checkers, CPU stress testers, system information tools, boot managers and tools for hard drives, partitions, password resets, and more. For a full list, check out the UBCD page. Typically, this is burned onto an ISO and you boot using a CD. But isn’t that so “last year”? Putting it onto a USB Drive makes it much more portable and it can sit side by side with your other portable tech tools. The directions on how to do this are courtesy of pendrivelinux: Download the Ultimate Boot CD iso file and place it into its own directoryDownload the UBCDfix.exe file and run it, extracting into the above folder From this folder click fixubcd.bat and follow the instructions Move the contents of the /dir/USBUBCD folder to your USB drive From your USB drive, run makeboot.bat to make it bootable.

Matt Cutts: Gadgets, Google, and SEO. Recently I’ve seen several interesting conversations about ad blocking, and I wanted to remind people about a great offering called Google Contributor. With Google Contributor, you contribute a certain amount of money each month. That subscription means that you see fewer ads on the web, and you support the sites that you visit with your money. Why You Should Care About and Defend Your Privacy. Roll Your Own DIY Security System This Weekend. SExpand these is my security system. What’s The Best Way to Back Up My Data for the Long Haul? Vanish: Enhancing the Privacy of the Web with Self-Destructing Data. Safe Shepherd Scrubs Your Personal Information from Creepy People Search Engines and Directories.

Foil Electronic Pickpockets with Aluminum Foil or Multiple Credit Cards. How to Make Your VPN Even More Secure. Recover Lost Passwords with Free Tools. How to create a "secure" password protected USB. Password Safe. How to Protect Your Data in the Event of a Webapp Shutdown (and Prevent the Problem in the Future) Without a Trace: Turn Your Flash Drive into a Portable Privacy Toolkit. BugMeNot: bypass web site registration. 10 Travel Tips for Protecting Your Privacy. Fran Maier is the president and executive chair of TRUSTe, the leading online privacy solutions provider. She speaks widely on issues of online privacy and trust and is active in mentoring women in technology. She serves on a number of Internet and trust-related boards, including the Online Trust Alliance.

At the peak of summer, the weather is not all that’s heating up – privacy, it turns out, has never been hotter. From senators to major news outlets, it seems everyone has privacy on the mind these days. The Hacker Manifesto. By +++The Mentor+++ Written January 8, 1986 Another one got caught today, it's all over the papers. How to Create a Fake Identity and Stay Anonymous Online. DIY USB password generator » Code and Life. Having done half a dozen V-USB tutorials I decided it’s time to whip up something cool. As USB keyboards were an area untouched, I decided to make a small USB HID keyboard device that types a password stored in EEPROM every time it’s attached.

Make Your Own USB Dongle to Generate and Enter Passwords Automatically. Your Privacy Kind of Sucks, Fix it Up This Weekend. How to Remove Your Google Search History Before Google's New Privacy Policy Takes Effect. Automatic Anonymous Wifi.

The two applications we will be using are called MadMACs and TOR. Set Up an Automated, Bulletproof File Back Up Solution. Make A Hidden And Encrypted Hard-Drive Partition For Free. Top 10 Secret Agent Security Tips and Tricks. When dealing with computer security, an often overlooked security risk is so-called "deleted files". How to Build a (Nearly) Hack-Proof Password System with LastPass and a Thumb Drive. The Intermediate Guide to Mastering Passwords with LastPass. Keep it secret, keep it safe: A beginner’s guide to Web safety. My family has been on the Internet since 1998 or so, but I didn't really think much about Internet security at first.

Oh sure, I made sure our eMachines desktop (and its 433Mhz Celeron CPU) was always running the latest Internet Explorer version and I tried not to use the same password for everything. Viruses, Trojans, and worms, oh my: The basics on malware. Anonymity.

Related:  Hacks/Tools   -  QR Codes & Augmented Reality   -  NLP Techniques   -  Anonymous Surfing / Proxys   -  Show me the money   -  Hacking/Cracking   -  Torrents   -  #3038363   -  How to Commit Internet Suicide and Disappear from the Web Forever   -  Free VPN for iPhone, Android, Mac and Windows for secure and private browsing, accessing blocked sites and unblocking Facebook and Youtube - Hotspot Shield   -  How to Completely Anonymize Your BitTorrent Traffic with BTGuard   -  Your Clever Password Tricks Aren't Protecting You from Today's Hackers   -  Browse Like Bond: Use Any Computer Without Leaving a Trace with Tails   -  How Can I Prevent My ISP from Tracking My Every Move?   -  Set Up an Automated, Bulletproof File Back Up Solution   -  How to Track Down Anyone Online   -  How to Unlock a Computer Without a Password Reset Disk   -  Matt Cutts: Gadgets, Google, and SEO   -  Password Safe   -  Without a Trace: Turn Your Flash Drive into a Portable Privacy Toolkit   -  The Hacker Manifesto   -  How to Create a Fake Identity and Stay Anonymous Online   -  DIY USB password generator » Code and Life   -  Your Privacy Kind of Sucks, Fix it Up This Weekend   -  How to Remove Your Google Search History Before Google's New Privacy Policy Takes Effect   -  Top 10 Secret Agent Security Tips and Tricks   -  How to Build a (Nearly) Hack-Proof Password System with LastPass and a Thumb Drive   -  Start-ups   -  Music downloading - legal issues   -  Y Combinator: Startup Library   -  Hacker ethic - Wikipedia, the free encyclopedia   -  8 Things You Won't Believe Can Be Hacked | Cracked.com   -  Hacker News   -  Hacker Things, Products for Hackers   -  PROTECT IP / SOPA Breaks The Internet on Vimeo   -  Split-testing 101   -  oclHashcat-plus - advanced password recovery   -  HackersOnlineClub   -  How To Use iCloud | A New User Guide | TCGeeks   -  Education   -  Enterprise