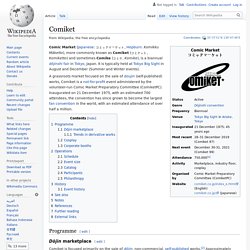 It is typically held at Tokyo Big Sight in August and December (Summer and Winter events). A grassroots market focused on the sale of doujin (self-published) works, Comiket is a not-for-profit event administered by the volunteer-run Comic Market Preparatory Committee (ComiketPC). Inaugurated on 21 December 1975, with an estimated 700 attendees, the convention has since grown to become the largest fan convention in the world, with an estimated attendance of over half a million. Programme[edit] Dōjin marketplace[edit] Trends in derivative works[edit] Cosplay[edit] Elaborately dressed cosplayers at Comiket 69 in December 2005 Comiket is a major outlet for cosplay enthusiasts. Ebisu, Shibuya. Major district of Special ward in Kantō, Japan Statue of Ebisu in front of Ebisu Station Ebisu (恵比寿) is major district of Shibuya-ku in Tokyo, Japan. 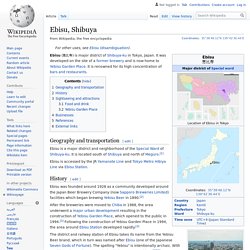 It was developed on the site of a former brewery and is now home to Yebisu Garden Place. It is renowned for its high concentration of bars and restaurants. Jinbōchō, Tokyo. District in Tokyo in Japan Kanda-Jinbōchō (神田神保町), commonly known as Jinbōchō or Jimbōchō, is a district of Chiyoda, Tokyo, Japan, known as Tokyo's center of used-book stores and publishing houses, and as a popular antique and curio shopping area. 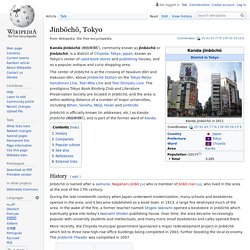 The center of Jinbōchō is at the crossing of Yasukuni-dōri and Hakusan-dōri, above Jimbōchō Station on the Tokyo Metro Hanzōmon Line, Toei Mita Line and Toei Shinjuku Line. The prestigious Tokyo Book Binding Club and Literature Preservation Society are located in Jinbōchō, and the area is within walking distance of a number of major universities, including Nihon, Senshu, Meiji, Hosei and Juntendo. Jinbōchō is officially known (in addresses, etc.) as Kanda-Jinbōchō (神田神保町), and is part of the former ward of Kanda. History[edit] Jinbōchō is named after a samurai, Nagaharu Jinbō [ja] who is member of Jinbō clan [ja], who lived in the area at the end of the 17th century. Jinbōchō at Yasukunidori and Hakusan Companies[edit] Popular culture[edit] 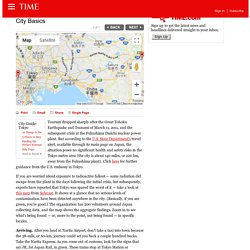 But according to the U.S. State Department's travel alert, available through its main page on Japan, the situation poses no significant health and safety risks in the Tokyo metro area (the city is about 140 miles, or 220 km, away from the Fukushima plant). Click here for further guidance from the U.S. embassy in Tokyo. If you are worried about exposure to radioactive fallout — some radiation did escape from the plant in the days following the initial crisis, but subsequently, experts have reported that Tokyo was spared the worst of it — take a look at this map from Safecast.

It shows at a glance that no serious levels of contamination have been detected anywhere in the city. Arriving. Cell Phones. Getting Around. The streets do not follow any logical pattern, and most of them don't have names. Trains and Taxis. 東京都公式ホームページ. How to Ride Subway & Trains in Tokyo - 35 Tips! How to Use the Tokyo Subway. Kappabashi Dougu Street. 文京区 ホーム. Meguro. Www.city.meguro.tokyo. Ogikubo, Tokyo. The area's main shopping area mostly consists of three connected department stores; Seiyu, Town Seven and Lumine. 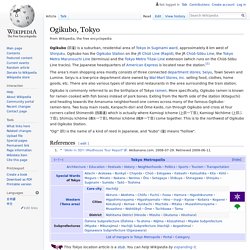 Seiyu is a low-price department store owned by Wal-Mart Stores, Inc. selling food, clothes, home goods, etc. There are also various types of stores and restaurants in the area surrounding the train station. Ogikubo is commonly referred to as the birthplace of Tokyo ramen. More specifically, Ogikubo ramen is known for ramen cooked with fish bones instead of pork bones. Exiting from the North side of the station (Kitaguchi) and heading towards the Amanuma neighborhood one comes across many of the famous Ogikubo-ramen-tens. Shibuya. Special ward in Kantō, Japan Shibuya (渋谷区 Shibuya-ku) is a special ward in Tokyo, Japan. 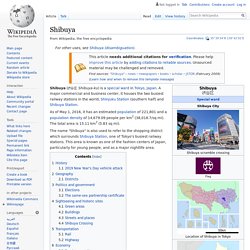 A major commercial and business center, it houses the two busiest railway stations in the world, Shinjuku Station (southern half) and Shibuya Station. As of May 1, 2016, it has an estimated population of 221,801 and a population density of 14,679.09 people per km2 (38,018.7/sq mi). The total area is 15.11 km2 (5.83 sq mi). The name "Shibuya" is also used to refer to the shopping district which surrounds Shibuya Station, one of Tokyo's busiest railway stations. History[edit] Shibuya was historically the site of a castle in which the Shibuya family resided from the 11th century through the Edo period. The village of Shibuya was incorporated in 1889 by the merger of the villages of Kami-Shibuya, Naka-Shibuya and Shimo-Shibuya within Minami-Toshima County (Toyotama County from 1896). Shibuya has achieved great popularity among young people since the early 1980s. 2019 New Year's Day vehicle attack[edit]

The skinny on Setagaya City: Tokyo's most populous ward. Area overview Setagaya City, as it is known in English, or Setagaya-ku in Japanese, is one of Tokyo’s 23 wards and the most populous one with almost a million people calling the area west of Shibuya home. 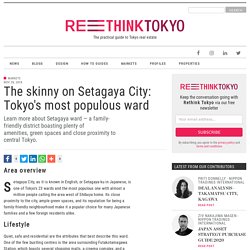 Its close proximity to the city, ample green spaces, and its reputation for being a family-friendly neighbourhood make it a popular choice for many Japanese families and a few foreign residents alike. Lifestyle Quiet, safe and residential are the attributes that best describe this ward. Tachiaigawa Yoshidaya, Shinagawa - Haneda / Kamata - Restaurant Reviews, Phone Number & Photos. Small And Difficult To Find - Takuboku Ishikawa Poetry Monument, Ginza Traveller Reviews - Tripadvisor. 10 Best Oden in Tokyo to Get Warm. Just what exactly are those peculiar looking food simmering in large containers of broth? 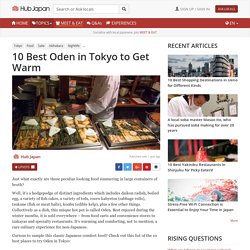 Well, it’s a hodgepodge of distinct ingredients which includes daikon radish, boiled egg, a variety of fish cakes, a variety of tofu, rooru kabyetsu (cabbage rolls), tsukune (fish or meat balls), konbu (edible kelp), plus a few other things. Collectively as a dish, this unique hot pot is called Oden. Best enjoyed during the winter months, it is sold everywhere – from food carts and convenience stores to izakayas and specialty restaurants. 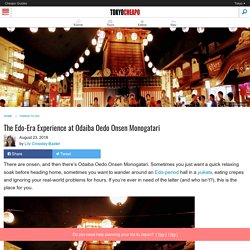 Sometimes you just want a quick relaxing soak before heading home, sometimes you want to wander around an Edo-period hall in a yukata, eating crepes and ignoring your real-world problems for hours. If you’re ever in need of the latter (and who isn’t?) , this is the place for you. With everything from foot baths to festival games, ramen to rotenburo, Odaiba Oedo Onsen Monogatari has enough to keep you occupied for a relaxing day out, but doesn’t come cheap. That said, there are ways to save on your visit (keep reading), and if you spend a good amount of time here, you can make it worth your while—especially on a cold rainy day!

Relax at the Termae-yu hot spring complex in central Tokyo. Suggested Activity tl;dr: You can save money on tickets by booking them online before you go. Getting started: Stepping back in time. 生涯ラーメン一本勝負.