RTOSinSmalltalk. ESUG: SqueakNOS. Squeak NOS by Gerardo Richarte Inspired by Dan Ingalls words "An operating system is a collection of things that don't ﬁt into a language. 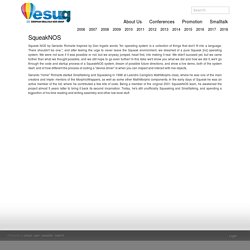 There shouldn't be one. ", and after feeling the urge to never leave the Squeak environment, we dreamed of a pure Squeak [no] operating system. We were not sure if it was possible or not, but we anyway jumped, head ﬁrst, into making it real. We didn't succeed yet, but we came further than what we thought possible, and we still hope to go even further! Gerardo "richie" Richarte started Smalltalking and Squeaking in 1998 at Leandro Caniglia's MathMorphs class, where he was one of the main creators and imple- mentors of the MorphicWrappers, as well as some other MathMorphs components.

SqueakNOS. NOS. SqueakNOS Last updated at 1:54 pm UTC on 22 August 2011 ''Operating System: An operating system is a collection of things that don't fit into a language. 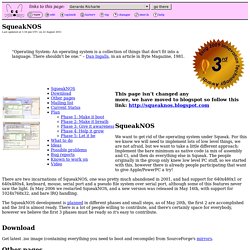 There shouldn't be one.'' – Dan Ingalls, in an article in Byte Magazine, 1981. This page isn't changed any more, we have moved to blogspot so follow this link: SqueakNOS We want to get rid of the operating system under Squeak. There are two incarnations of SqueakNOS, one was pretty much abandoned in 2001, and had support for 640x480x1 or 640x480x4, keyboard, mouse, serial port and a pseudo file system over serial port, although some of this features never saw the light. The SqueakNOS development is planned in different phases and small steps, as of May 20th, the first 2 are accomplished and the 3rd is almost ready.

Download Get latest .iso image (containing everything you need to boot and recompile) from SourceForge's mirrors. Other pages. Smalltalk Kernel Language Manual Sep77. Seeing the Objects. The Moose Book. Moose (moosetechnology.org) is a platform for expressing analyses of software systems and of data in general. 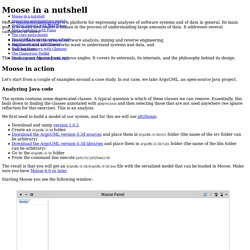 Its main goal is to assist and enable a human in the process of understanding large amounts of data. It addresses several categories of users: researchers in the area of software analysis, mining and reverse engineering,engineers and architects who want to understand systems and data, andtool builders. This book covers Moose from various angles. It covers its externals, its internals, and the philosophy behind its design. Agile Visualization. Open Croquet. Croquet is a project started by AlanKay, based upon SqueakSmalltalk. 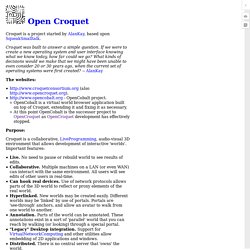 Croquet was built to answer a simple question. If we were to create a new operating system and user interface knowing what we know today, how far could we go? What kinds of decisions would we make that we might have been unable to even consider 20 or 30 years ago, when the current set of operating systems were first created? -- AlanKayThe websites: (also - OpenCobalt project. OpenCobalt is a virtual world browser application built on top of Croquet, extending it and fixing it as necessary.

The OpenCroquet pre-alpha which was briefly available on the net provided a cross platform, shared 3D collaborative workspace which allows users to modify their own environment while it is running.

Squeak Smalltalk Syntax. The Squeak Language stated informally In this section I will state and describe the Squeak Language, briefly SL, and do so in two ways, namely first informally in English, and then formally though also in English, but now using a few simple formal conventions for writing formal grammars that will be first explained. 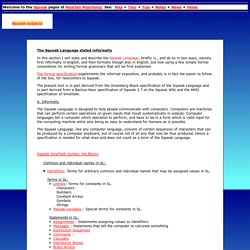 Computers are machines that can perform certain operations on given inputs that result systematically in outputs. OOPAvance. SBE. Squeak Tutorials. FreeCAD/Cobalt: 3D CAD with Motion Simulation. To complete a 3D CAD or Modeling tool inside Cobalt for the creation and simulation of objects in virtual worlds. 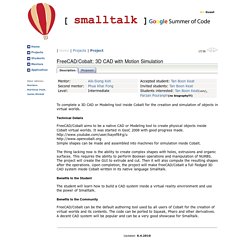 Technical Details FreeCAD/Cobalt aims to be a native CAD or Modeling tool to create physical objects inside Cobalt virtual worlds. It was started in GsoC 2008 with good progress made. shapes can be made and assembled into machines for simulation inside Cobalt. The thing lacking now is the ability to create complex shapes with holes, extrusions and organic surfaces. This requires the ability to perform Boolean operations and manipulation of NURBS. Benefits to the Student The student will learn how to build a CAD system inside a virtual reality environment and use the power of Smalltalk. 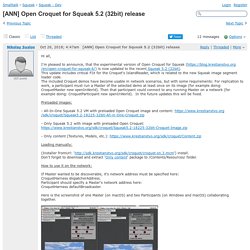 > First major problem is that > > OGLUnix>>openGLLibraryName > ^Smalltalk osVersion = 'linux' > ifTrue: ['libGL.so.1'] > ifFalse: ['GL'] It's actually a bit worse - the osVersion returned by Raspbian is 'linux-gnu' - so I tried changing that to openGLLibraryName ^(Smalltalk osVersion beginsWith: 'linux') ifTrue: ['libGL.so.1'] ifFalse: ['GL'] which got a bit further.

Google Groupes. To use Google Groups Discussions, please enable JavaScript in your browser settings and then refresh this page. 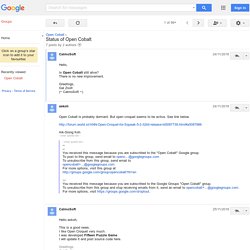 MoreEven more from Google Sign in Groups Home Click on a group’s star icon to add it to your favourites Recently viewed. Troubleshooting Guide - Open Cobalt Website. Under Construction (Applies to Windows users with multi-core processors and Nvidia Video cards only.) 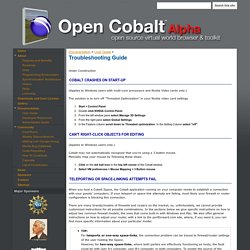 The solution is to turn off "Threaded Optimization" in your Nvidia video card settings Start > Control PanelDouble click NVIDIA Control Panel.From the left window pane select Manage 3D Settings.From the right pane select Global Settings.In the Feature column scroll down to Threaded optimization. In the Setting Column select "off" (Applies to Windows users only.) Cobalt may not automatically recognize that you're using a 3 button mouse. Click on the red ball icon in the top left corner of the Cobalt window.Select VM preferences > Mouse Mapping > 3 Button mouse. 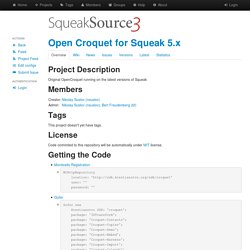 Remember Smalltalk? - Mark Driver. By Mark Driver | October 9, 2008 | 50 Comments I’ve often referred to Smalltalk as the ‘Latin’ of modern OO languages. Most owe a tremendous debt to Smalltalk but the language itself has been relegated to a small niche of technology elites for several years now. Here a simply equation. In terms of mental fortitude… 1 Smalltalk developer = 2.5 C++ developers1 C++ Developer = 1.5 Java developers in other words… OpenSmalltalk. Squeak/Smalltalk. Newspeak. Cuis-Smalltalk/Cuis-Smalltalk-Dev: Active development of Cuis Smalltalk.