Smalltalk: It’s Not Your Grandparent’s Programming Language. Smalltalk is old. 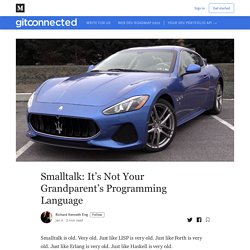 Very old. Just like LISP is very old. Smalltalk is not a perfect language. What are its shortcomings? First, Smalltalk is dynamically typed. 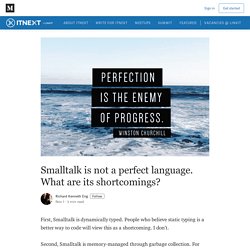 People who believe static typing is a better way to code will view this as a shortcoming. I don’t. Second, Smalltalk is memory-managed through garbage collection. For some applications where execution efficiency is of paramount importance, garbage collection may impose an unacceptable delay. Third, Smalltalk is VM-based and executes bytecode. Fourth, Smalltalk’s syntax is supremely simple and easy to learn. Nevertheless, Smalltalk has proven to be one of the most concise and elegant programming languages in the world. 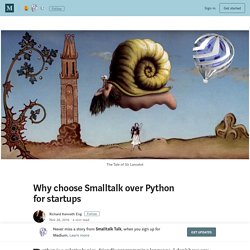 I don’t have any quarrel with it. In fact, I love it in combination with web2py for web development. Web2py is a full-stack framework that comes with everything you need right out of the box. Batteries are included! There’s no need to futz around with configuration and setup like you do in Django. Web2py makes it so quick and easy to write web apps that I use it for ALL my websites. Can This Man Spark a Renaissance for the Smalltalk Programming Language? When it comes to programming languages, Smalltalk is about as old as it gets: It was first developed in 1969, with the first stable release coming out by 1980. 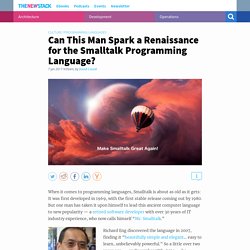 But one man has taken it upon himself to lead this ancient computer language to new popularity — a retired software developer with over 30 years of IT industry experience, who now calls himself “Mr. Smalltalk.” Richard Eng discovered the language in 2007, finding it “beautifully simple and elegant… easy to learn…unbelievably powerful.” So a little over two years ago — on December 17th, 2014 — he founded a nonprofit called Smalltalk Renaissance to promote new interest in the language.

And he also talks up Amber, a Smalltalk dialect for writing browser-based applications that use the JavaScript runtime, as well as the Smalltalk-based JavaScript framework Seaside. “What needed to be done, I surmised, was to appeal to people on an emotional basis,” Eng wrote in October, “the way it’s done in marketing and advertising.” User interface - Run Smalltalk on server without GUI? Smalltalk Digest: August Edition 2018.

A new demo video for my sister project @Moose2Model. In the video Smalltalk coding is analyzed, But it works best with @SAP applications □… Software Exploration with Moose2Model - A new demo video. Hope you've seen that @RainerWinkler… Why do we (@Moose2Model, me, @Sourcetrail...) exist. Because we are better in repetitive work. @ivictor88 #sitTSR… You can write Jupyter markdown documents using #Pharo and #roassal . Look for #jupyterTalk.… Roassal Tutorial #pharo. I think this is an amazing use case for Cincom #Smalltalk!… Pharo books. Why Pharo Might be the Future of Software Development. Over the past several decades, we’ve seen numerous programming languages emerge to promise us a glorious new future in software development. 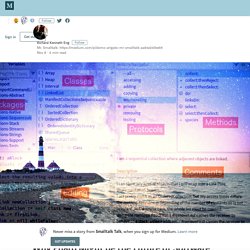 Languages such as Ada, Eiffel, Ruby, Java, Scala, and more recently, Clojure, Go, Rust, Kotlin, and Swift. They’ve all fallen short of the ideal. They’ve failed to give us the tremendous boost in programmer productivity that we crave. They make development more tedious and time-consuming than it has to be. These languages also do not encourage the democratization of programming. Trapped By Our Past The current state of the art in programming is stagnant, bordering on archaic. The result is a lost opportunity for vastly greater development productivity and more pleasant programming for the less technically inclined. In the last decade or so, language designers have been seeking the Holy Grail of programming languages.

Enter Pharo. Smalltalk May Be the Nikola Tesla of the IT Industry. Nikola Tesla was a brilliant inventor and visionary who died largely forgotten. 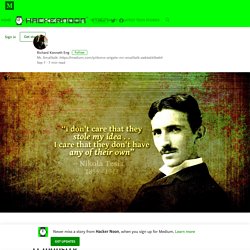 His contributions to the world were enormous, but people still remember Edison and Franklin and da Vinci and Bell. For decades, attempts to honour Tesla with a New York museum at Wardenclyffe failed repeatedly. Only recently has this borne fruit. Here are some of Tesla’s contributions: invented the first alternating current (AC) motordeveloped AC generation and transmission technologycreated the Tesla coil, a high-voltage transformer which came to be the genesis for the cathode ray tube, radio transmitter, radar, and many other technologiesinvented X-ray technologyinvented dynamos and the induction motorinvented the first working radioinvented the fluorescent light bulbinvented the remote controlinvented wireless transmission of electricitydesigned the first hydroelectric generating plant at Niagara Falls. The Early History Of Smalltalk. Original pdf / make corrections Alan C. 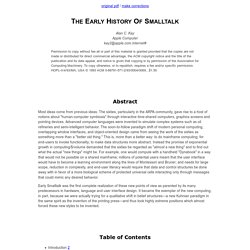 Kay Apple Computer kay2@apple.com.Internet# Permission to copy without fee all or part of this material is granted provided that the copies are not made or distributed for direct commercial advantage, the ACM copyright notice and the title of the publication and its date appear, and notice is given that copying is by permission of the Association for Computing Machinery.

To copy otherwise, or to republish, requires a fee and/or specific permission. The Early History Of Smalltalk. Why FAMIX and not UML ? UML Shortcomings for Coping with Round-trip Engineering [Note that this report will appear in the UML'99 Conference Proceedings, published by Springer-Verlag in the LNCS series.] 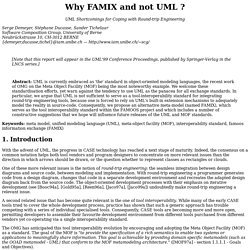 Abstract: UML is currently embraced as 'the' standard in object-oriented modeling languages, the recent work of OMG on the Meta Object Facility (MOF) being the most noteworthy example. We welcome these standardisation efforts, yet warn against the tendency to use UML as the panacea for all exchange standards. In particular, we argue that UML is not sufficient to serve as a tool-interoperability standard for integrating round-trip engineering tools, because one is forced to rely on UML's built-in extension mechanisms to adequately model the reality in source-code. 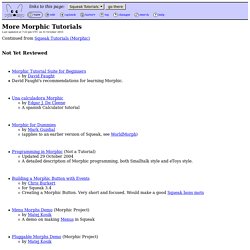 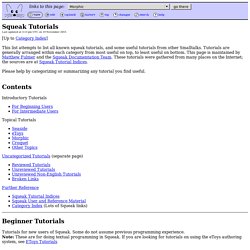 Squeak Tutorials. Squeak Tutorials Last updated at 3:13 pm UTC on 19 November 2015 [Up to Category Index] This list attempts to list all known squeak tutorials, and some useful tutorials from other Smalltalks. Tutorials are generally arranged within each category from most useful on top, to least useful on bottom. This page is maintained by Matthew Fulmer and the Squeak Documentation Team. Please help by categorizing or summarizing any tutorial you find useful. Contents. Introductions to Squeak. Introductions to Squeak Last updated at 2:38 am UTC on 11 February 2014 This page has several ways for programmers to get started with Squeak.