123D Scanner - Home made 3D Scanner. Hey - have a look at my new project HERE In this project I built a 3D Scanner, that enables generating 3D models of physical objects. 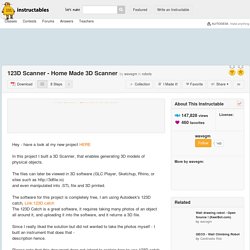 The files can later be viewed in 3D software (GLC Player, Sketchup, Rhino, or sites such as and even manipulated into .STL file and 3D printed. The software for this project is completely free, I am using Autodesk's 123D catch, Link:123D catch The 123D Catch is a great software, it requires taking many photos of an object all around it, and uploading it into the software, and it returns a 3D file. Since I really liked the solution but did not wanted to take the photos myself - I built an instrument that does that - description hence.

Please note that this document does not intend to explain how to use 123D catch (this can be found here) Blender, burster, arduino, processing, 3d scanning, programming. 3D scanner (024; 21.02.2010; blender) Prototype. 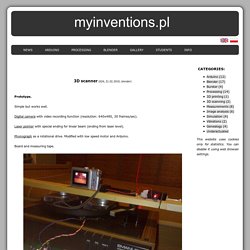 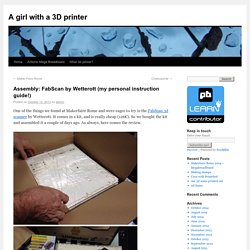 It comes in a kit, and is really cheap (126€). So we bought the kit and assembled it a couple of days ago. As always, here comes the review. As soon as you open the box you realize that the construction is really really simple. There are the arduino and the shield, the laser module and the webcam, a motor with its driver. FabScan CUBE. Back to FabScan The FabScan CUBE is a 3D-Scanner. 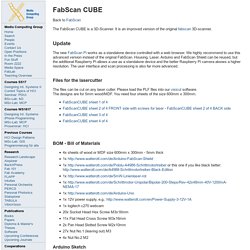 It is an improved version of the original fabscan 3D-scanner. The new FabScan Pi works as a standalone device controlled with a web browser. Watterott electronic. Fabscan Pi project - 3D scanning for all - The MagPi MagazineThe MagPi Magazine. The full article can be found in The MagPi 38 Few things in modern life are more fun than 3D-scanning an object, then using a 3D printer to create a copy. 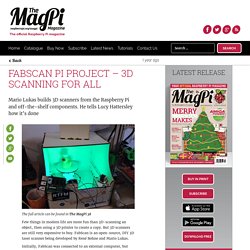 But 3D scanners are still very expensive to buy. FabScan is an open-source, DIY 3D laser scanner being developed by René Bohne and Mario Lukas. FabScan-Shield for Schrittmotortreiber. The FabScan Project. Back to Tools The original FabScan was developed by Francis Engelmann in his Bachelor's thesis (cost of materials: 150 Euros). 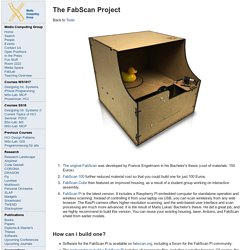 FabScan 100 further reduced material cost so that you could build one for just 100 Euros. FabScan Cube then featured an improved housing, as a result of a student group working on interactive assembly. FabScan Pi is the latest version. 3D Scanner: FabScan Pi. There are several way to build an affordable 3D scanner for your home. 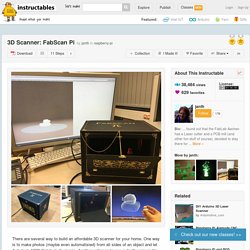 One way is to make photos (maybe even automatisied) from all sides of an object and let Autodesk 123D Catch do its magic. Another option is to use a depth camera like the Kinect and place your object on a rotating table and get depth images of all sides - great especially for a person scanner. A cheap option is using a line laser which enlights on line on a object, get a camera image of that line and then rotate the object a bit and repeat - until you get the 3D form out of this slices when you have rotated the obect by 360 degree. Francis Engelman build such a system as bachelor thesis at the media computing group of the RWTH Aachen - the so-called FabScan. It uses a basic webcam, an arduino for controlling a line laser and a stepper motor for a turntable. FabScanPi. About the Project FabScan is an open source 3D laser scanner. 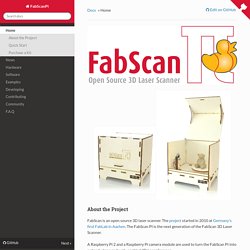 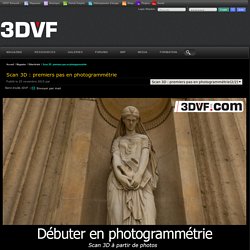