A Parent’s Guide to Dealing With Fortnite. Kids of all ages are obsessively playing Fortnite on their phones, computers, PlayStations, Xboxes and Switches. 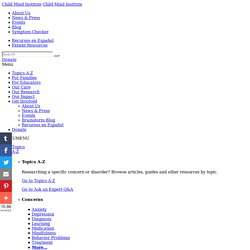 Movement and Mindfulness for the Classroom. 50% of teens feel addicted to their phones, poll says. The Elderly Woman In This Photo Is a Reminder to Us All to Put Down Our Phones - Black Mass Premiere Viral Photo. Believe us, we get it—it's all too easy to get caught up in what's happening on your smartphone rather than simply enjoying the moment. 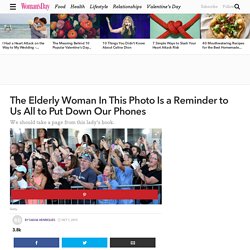 But sometimes you have to remind yourself to just put down that phone and live. At the September 15th premiere of the film Black Mass in Brookline, MA, John Blanding, a photographer for the Boston Globe, snapped the above picture of the enthusiastic crowd standing outside of the theater. At first glance, it seems like your standard photo of fans waiting for a chance to capture a snapshot of megastar Johnny Depp on their devices. But upon closer inspection, it turns out that the picture offers up an important life lesson.

Advertisement - Continue Reading Below. Moment – Automatically track your and your family's daily iPhone and iPad use. In South Korea, a rehab camp for Internet-addicted teenagers. MUJU, South Korea — Since he arrived at the camp, Yoon Yong-won had experienced recurrent nightmares. 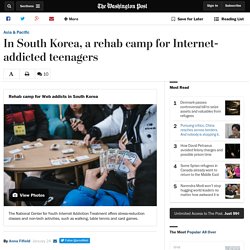 He was playing a game on his phone, and the image of the phone in his hands was so vivid. Digital Detox: How to Break Your Bad Tech Habits. We live in a constantly connected world. 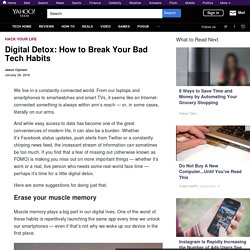 From our laptops and smartphones to smartwatches and smart TVs, it seems like an Internet-connected something is always within arm’s reach — or, in some cases, literally on our arms. 150 Friends on Facebook? You're Close to Only 4. Uk.businessinsider. ShutterstockTake a mindful breath. 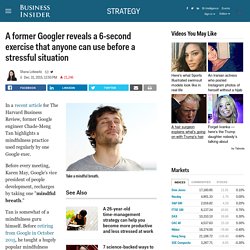 In a recent article for The Harvard Business Review, former Google engineer Chade-Meng Tan highlights a mindfulness practice used regularly by one Google exec. Why screen time before bed is bad for children. Electronic devices intrude on time for sleep The presence and use of these devices is incredibly widespread. 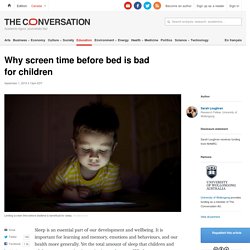 A 2006 survey showed that nearly all adolescents have at least one electronic device in their bedroom. Given this, and the increasing exposure to screen time – particularly in the hours before bedtime – it is perhaps not surprising that screen time is now associated with insufficient and poor quality sleep. But the relationship between screen time and sleep is more complex than that.

Screen time could be negatively influencing sleep in many ways. Feature: Can your mobile phone make you healthier? Fitbit activity trackers come with a “manifesto.” 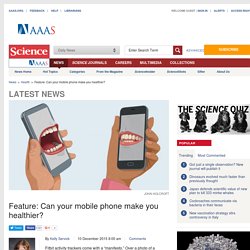 Over a photo of a fierce-eyed jogger, the company’s website proclaims: “Every moment matters and every bit makes a big impact. Because fitness is the sum of your life.” Roughly 20 million people have found that message compelling enough to order a Fitbit. Why Sexting Is So Common Among Teens. News from The Associated Press. CANON CITY, Colo. 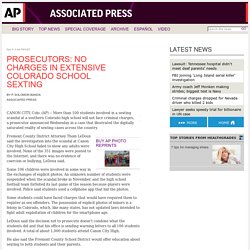 (AP) -- More than 100 students involved in a sexting scandal at a southern Colorado high school will not face criminal charges, a prosecutor announced Wednesday in a case that illustrated the digitally saturated reality of sexting cases across the country. Fremont County District Attorney Thom LeDoux said the investigation into the scandal at Canon City High School failed to show any adults were involved. 25 Effective Tech Tips for the Easily Distracted. The Long Game: 4 Essentials for a Successful Mindfulness Program. Now that the mindfulness in education movement is nearing the end of its first decade, there are a few schools that have built exemplary mindfulness programs. 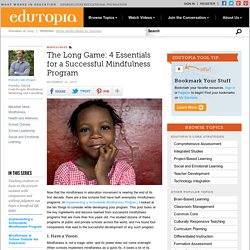 In Implementing a Schoolwide Mindfulness Program, I looked at the ten things to consider while developing your program. This post looks at the key ingredients and lessons learned from successful mindfulness programs that are more than five years old. I've studied dozens of these programs at public and private schools across the world, and I've found four components that lead to the successful development of any such program. #FOMO Leads To Depression And Anxiety In Teen Social Media Users. Teens today admit they suffer from FOMO or the fear of missing out on social media, a report in Australia revealed. 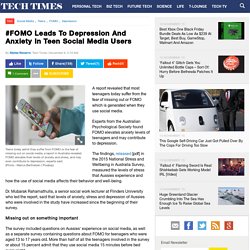 FOMO elevates their levels of anxiety and stress, and may even contribute to depression, experts said. (Photo : Marius Berthelsen | Pixabay) A report revealed that most teenagers today suffer from the fear of missing out or FOMO which is generated when they use social media. Experts from the Australian Psychological Society found FOMO elevates anxiety levels of teenagers and may contribute to depression. The findings, released [pdf] in the 2015 National Stress and Wellbeing in Australia Survey, measured the levels of stress that Aussies experience and how the use of social media affects their behavior and well-being.

Keng Review of studies on mindfulness. Edutopia. By objective measures, our young people are more anxious, more depressed, and have more psychopathology in general than students did a few decades ago. This has important implications for educators, school administrators, and society at large. What if our traditional school systems are unwittingly contributing to the problem -- and what if a relatively simple practice could help? Sense of Failure As we are all well aware, the current educational system is narrowing its definition of what defines student success. How social technologies and human behavior are changing the aftermath of disasters. How do people use social technologies to communicate and work together after disasters?

And how can those technologies be improved to facilitate that communication? Those were two of the core issues addressed by Kate Starbird, assistant professor in the Department of Human Centered Design & Engineering at the University of Washington, during her talk at the recent GeekWire Summit. Starbird discussed the emerging field of crisis informatics — the study of how information-communication technologies are used during crisis events.

Why we should rethink our relationship with the smartphone. Teen Internet Use Graphic. Kids And Screen Time: What Does The Research Say? : NPR Ed. Kids are spending more time than ever in front of screens, and it may be inhibiting their ability to recognize emotions, according to new research out of the University of California, Los Angeles. The study, published in the journal Computers in Human Behavior, found that sixth-graders who went five days without exposure to technology were significantly better at reading human emotions than kids who had regular access to phones, televisions and computers. The UCLA researchers studied two groups of sixth-graders from a Southern California public school. One group was sent to the Pali Institute, an outdoor education camp in Running Springs, Calif., where the kids had no access to electronic devices.

Kids And Screen Time: Cutting Through The Static : NPR Ed. Internet and Computer Addiction: Signs, Symptoms, and Help for Balancing Your Time Online and Off. Social Presence Theory — Time Barrow. Social presence theory. Classification[edit] The Online Disinhibition Effect. UNDIGITIZE.ME - Dealing with Smartphone Addiction. Stop Googling. Let’s Talk. Are We Plugged-In, Connected, But Alone? Have We Grown Too Fond Of Technology? Making The Case For Face To Face In An Era Of Digital Conversation. UNDIGITIZE.ME - Dealing with Smartphone Addiction.