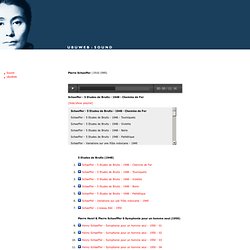 His innovative work in both the sciences —particularly communications and acoustics— and the various arts of music, literature and radio presentation after the end of World War II, as well as his anti-nuclear activism and cultural criticism garnered him widespread recognition in his lifetime. Amongst the vast range of works and projects he undertook, Schaeffer is most widely and currently recognized for his accomplishments in electronic and experimental music, at the core of which stands his role as the chief developer of a unique and early form of avant-garde music known as musique concrète.

The genre emerged out of Europe from the utilization of new music technology developed in the post-Nazi Germany era, following the advance of electroacoustic and acousmatic music. UbuWeb Sound | UbuWeb. How Much Does A Band Make From Various Music Platforms? Unfortunately, you will not find our record in any record stores. The reason for this is because we do not have a record label, which means we have no access to distribution. Without a distributor, you cannot sell your CD’s in record stores.

If you use the free version of Spotify, it won’t cost you anything. Deezer seems to pay a little more. We’ve been getting 0.006 EUR/play from them. eMUSIC: eMusic is a subscription service. iTUNES: Google Translate. A guide to La Monte Young’s music. Reading this on mobile? 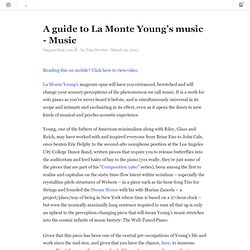 Click here to view video La Monte Young’s magnum opus will have you entranced, bewitched and will change your sensory perceptions of the phenomenon we call music. It is a work for solo piano as you’ve never heard it before, and is simultaneously universal in its scope and intimate and enchanting in its effect, even as it opens the doors to new kinds of musical and psycho-acoustic experience.

Given that this piece has been one of the central pre-occupations of Young’s life and work since the mid-60s, and given that you have the chance, here, to immerse yourself in it for more than six-and-a-half hours (or you can choose a shorter, five-hour performance, starting here), The Well-Tuned Piano is going to dominate this discussion.

So the first thing is: don’t panic.

The Avant-Garde Project: An Archive of Music by 200 Cutting-Edge Composers, Including Stravinsky, Schoenberg, Cage & More. Every sphere of recorded music, from late-1960s folk to Philadelphia hip-hop to Japanese jazz (a personal pursuit of mine), has its crate-diggers, those happy to flip through hundreds — nay, hundreds of thousands — of obscure, forgotten vinyl albums in search of their subgenre’s even obscurer, more forgotten gems. 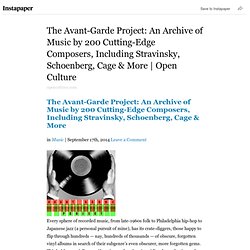 This holds especially true, if not in number than in avidity, for enthusiasts of the 20th-century classical-experimental-electroacoustic tradition that The Avant-Garde Project takes as its preservation mandate. The site offers material “digitized from LPs whose music has in most cases never been released on CD, and so is effectively inaccessible to the vast majority of music listeners today.” To the best of the Archive’s knowledge, the LPs are all currently out of print, and all the music is extracted with an analog rig that ranks as “near state-of-the-art, producing almost none of the tracking distortion or surface noise normally associated with LPs.” Related Content:

Accident and emergency waiting times in England. NHS England sets a target that 95% of A&E patients should be admitted, transferred or discharged within four hours of their arrival.This target has been generally met across all A&E units but has been consistently breached by major A&E units since 2012.These waiting times don’t include the time between admission and treatment, which can be a much longer period. 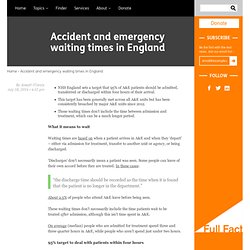 What it means to wait Waiting times are based on when a patient arrives in A&E and when they ‘depart’ – either via admission for treatment, transfer to another unit or agency, or being discharged. ‘Discharges’ don’t necessarily mean a patient was seen. Some people can leave of their own accord before they are treated. In these cases: “the discharge time should be recorded as the time when it is found that the patient is no longer in the department.” About 2.5% of people who attend A&E leave before being seen. 95% target to deal with patients within four hours The Coalition government lowered this standard to 95%.