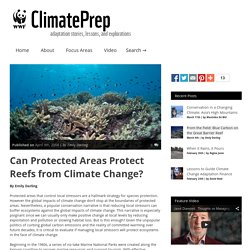 However the global impacts of climate change don’t stop at the boundaries of protected areas. Nevertheless, a popular conservation narrative is that reducing local stressors can buffer ecosystems against the global impacts of climate change. Beginning in the 1960s, a series of no-take Marine National Parks were created along the Kenyan coastline to recover marine resources and support tourism.

Small-scale coral reef fisheries in Kenya. In 1998, an El Niño heat wave intensified throughout the western Indian Ocean and resulted in the warmest ocean temperatures ever recorded, provoking mass coral bleaching that killed over 40% of corals throughout the region. By digging into the different types of coral species on fished and unfished reefs, we revealed important shifts in coral communities both before and after bleaching. 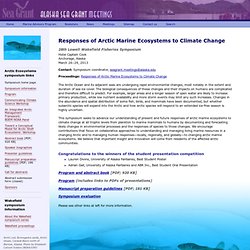 The biological consequences of these changes and their impacts on humans are complicated and therefore difficult to predict. This symposium seeks to advance our understanding of present and future responses of arctic marine ecosystems to climate change at all trophic levels from plankton to marine mammals to humans by documenting and forecasting likely changes in environmental processes and the responses of species to those changes. Hope and climate change: Reasons to remain optimistic.

No need to hide in a corner: There are a few signs of hope when it comes to climate change. (Photo by Zen Sutherland.) Cross-posted from Huffington Post. Climate Change Linked to Waterborne Diseases in Inuit Communities. This story is part of a special National Geographic News series on global water issues. 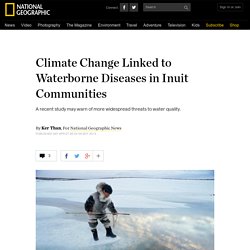 As global warming triggers heavier rainfall and faster snowmelt in the Arctic, Inuit communities in Canada are reporting more cases of illness attributed to pathogens that have washed into surface water and groundwater, according to a new study. The findings corroborate past research that suggests indigenous people worldwide are being disproportionately affected by climate change. This is because many of them live in regions where the effects are felt first and most strongly, and they might come into closer contact with the natural environment on a daily basis. For example, some indigenous communities lack access to treated water because they are far from urban areas. Climate Change Doubles Cost of Conserving Nature. Arlington, VA / San Francisco, CA / Stellenbosch, South Africa — Climate change will make conservation of biodiversity, and all the associated human benefits such as clean water and clean air, more challenging and expensive, with costs increasing by more than 100 percent in some cases, according to three new studies by a group of international researchers convened by Conservation International. 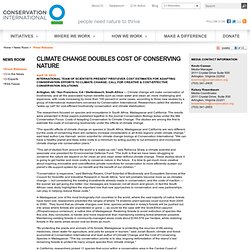 Researchers called the studies a "wake-up call" for cost-efficient biodiversity conservation and climate stabilization. The researchers focused on species and ecosystems in South Africa, Madagascar and California. The results were presented in three papers published together in the journal Conservation Biology today under the title Conservation Focus: Costs of Adapting Conservation to Climate Change. The studies are among the first to estimate the costs of conserving biodiversity under the effects of climate change. Green Economy > Home. Welcome to the European Business and Biodiversity Campaign! Environmental factors must be included in GDP, say scientists - 20 Feb 2012. Making the economic case for business and biodiversity. Willkommen.

About PUMA. Munich November 16th, 2011 Impact of € 51 million resulting from land use, air pollution and waste along the value chain added to previously announced € 94 million for GHG emissions and water consumption PUMA’s Parent Company PPR announced its Luxury and Sport & Lifestyle Brands to implement a Group EP&L by 2015 Within the context of publishing a worldwide unprecedented Environmental Profit and Loss Account (EP&L), the Sportlifestyle company PUMA and PPR HOME, the PPR Group’s sustainability initiative, released today, that the environmental impact for the key areas of greenhouse gas emissions (GHG), water use, land use, air pollution and waste, generated through the operations and supply chain of PUMA is valued at € 145 million in 2010. 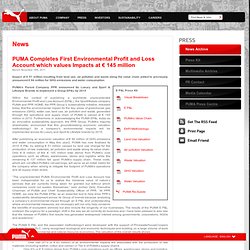 Unmuessig_Green_Economy_Magic_Bullet.pdf (application/pdf Object) Do we live in a 'green economy'? New report assesses progress in Europe. Green economy is set to be one of the two main themes at the United Nations Sustainable Development Summit in Rio de Janeiro in June this year. 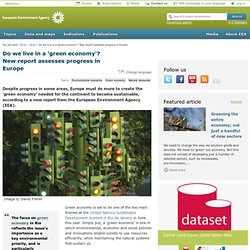 Simply put, a 'green economy' is one in which environmental, economic and social policies and innovations enable society to use resources efficiently, while maintaining the natural systems that sustain us. "The focus on green economy in Rio reflects the issue's importance as a key environmental priority, and is particularly timely, given that it can provide a path to renewed economic growth and job creation in response to the current severe economic crises facing Europe," EEA Executive Director Jacqueline McGlade said. The 'Environmental indicator report 2012' presents established indicators that illustrate progress towards improving resource efficiency, and indicators that depict the risk of passing environmental thresholds.

European environmental policies have helped Europe use resources more efficiently. Key findings Green economy across Europe. The value of nature itself at the core of a green economy. 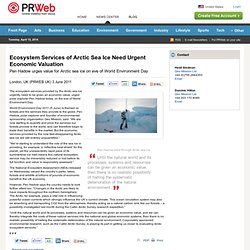 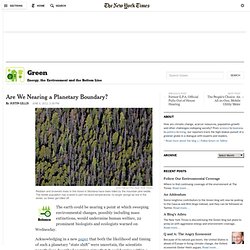 The beetle population has soared in part because temperatures no longer plunge as low in the winter, so fewer get killed off. The earth could be nearing a point at which sweeping environmental changes, possibly including mass extinctions, would undermine human welfare, 22 prominent biologists and ecologists warned on Wednesday. Acknowledging in a new paper that both the likelihood and timing of such a planetary “state shift” were uncertain, the scientists nonetheless described warning signs that it could arrive within a few human generations, if not sooner. The problems are familiar by now: they include a planetary warming that, while slow on the scale of a human lifetime, is extremely rapid on a geologic time scale, the scientists said. Home - climate-adapt. 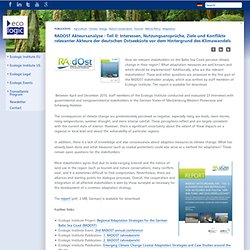 The Arctic. Many Strong Voices - Programme Overview. Linking the Arctic and SIDS The Arctic and Small Island Developing States (SIDS) are directly threatened by climate change and vulnerable to its effects. 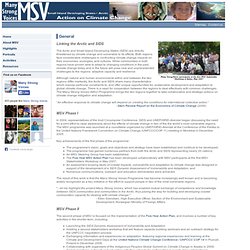 Both regions face considerable challenges in confronting climate change impacts on their economies, ecologies, and cultures. While communities in both regions have proven able to adapt to changing conditions in the past, climate change today and in the future will pose new and unprecedented challenges to the regions’ adaptive capacity and resilience. Although natural and human environments within and between the two regions differ markedly, the Arctic and SIDS share many characteristics which impose particular constraints to, and offer unique opportunities for, sustainable development and adaptation to global climate change. There is a need for cooperation between the regions to deal effectively with common challenges. “An effective response to climate change will depend on creating the conditions for international collective action.” The ASTI 2011 at IPY by Courtney Price on Prezi. Blame Canada. By Stephen Leahy – May 30, 2012 The Country Has Become a Petro-State, Happily Drilling for Profits as the World Warms What has happened to Canada?

To the dismay of many Canadians, a country with an international reputation for its relatively progressive environmental policies (at least compared to the United States) is rushing headlong to dig up all the oil, gas, and coal it can. Welcome to Power Tools: for policy influence in natural resource management. Download. Stakeholder_power_tool_english.pdf (application/pdf Object) Managing stakeholder power & influence. Author: Jim Riley Last updated: Sunday 23 September, 2012. Stakeholder Analysis - Project Management Tools from MindTools. Winning Support for Your Projects Try this out in our Interactive Screen App! The World Future Council: WFC - Home.