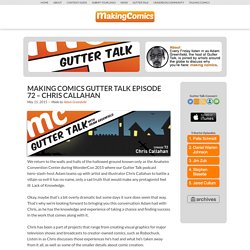 This episode is the first part of a two part conversation between Jason and sometimes co-host, sometimes guest, but all the time favorite, Daniel Lieske, an artist based in Germany. In one of the re-issues we released last year, Jason and Daniel were going through some rather successful Kickstarter campaigns. It was hard to not join in their excitement. But as much as we wish it weren’t the case, time moves on and that edge on the excitement begins to soften some. This leads to what can be a very scary question: Now what? 50 Essential Science Fiction Books. This was a virtually impossible task. 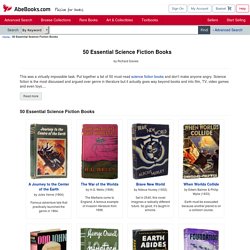 Put together a list of 50 must-read science fiction books and don’t make anyone angry. Science fiction is the most discussed and argued over genre in literature but it actually goes way beyond books and into film, TV, video games and even toys.... Here are the criteria I used. One book per author, so that was hard on the big three of science fiction – Robert Heinlein, Isaac Asimov and Arthur C Clarke, who each have multiple classic titles to their name. Attempt to show as many sub-genres of science fiction and plot themes as possible. 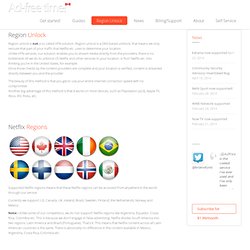 Region unlock is a DNS based unblock, that means we only reroute that part of your traffic that Netflix etc. uses to determine your location. Unlike VPN services, our solution enables you to stream media directly from the providers, there is no bottleneck! All we do to unblock US Netflix and other services in your location, is ‘fool’ Netflix etc. into thinking you’re in the United States, for example.

Once those checks by the content providers are complete and your location is verified, content is streamed directly between you and the provider. The beauty of this method is that you get to use your entire internet connection speed with no compromise! Netflix Regions Supported Netflix regions means that these Netflix regions can be accessed from anywhere in the world through our service. Jonathan Lethem on the subversive power of comics and science fiction.

4inShare Jump To Close Jonathan Lethem makes no secret of his influences. 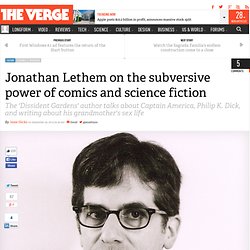 His first published novel, Gun, with Occasional Music, riffed on the hard-boiled detective fiction of Raymond Chandler. He’s written an academic novel in the style of Don Delillo (As She Climbed Across the Table), and crossbred E.M. Glen and Bessie Hyde. Glen and Bessie Hyde were newlyweds who disappeared while attempting to run the rapids of the Colorado River through Grand Canyon, Arizona in 1928. 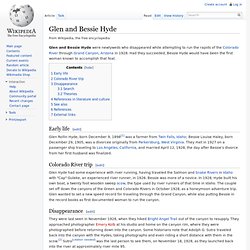 Had they succeeded, Bessie Hyde would have been the first woman known to accomplish that feat. Early life[edit] London in 1927. Www.jrbooksonline.com/PDF_Books/why_govt_doesnt_work.pdf. Introducing Courier Prime. Easy Ryders « The Outdoor Co-ed Topless Pulp Fiction Appreciation Society. So, what’s a girl to do when it’s 38 degrees outside? 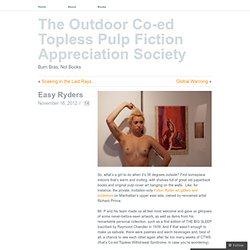 Find someplace indoors that’s warm and inviting, with shelves full of great old paperback books and original pulp cover art hanging on the walls. Like, for instance, the private, invitation-only Fulton Ryder art gallery and bookstore on Manhattan’s upper east side, owned by renowned artist Richard Prince. Mr. P and his team made us all feel most welcome and gave us glimpses of some never-before-seen artwork, as well as items from his remarkable personal collection, such as a first edition of THE BIG SLEEP inscribed by Raymond Chandler in 1939. Printed Matter « The Outdoor Co-ed Topless Pulp Fiction Appreciation Society. Each year, Printed Matter Inc. presents the NY Art Book Fair, and this year we were invited to join Fulton Ryder at their booth the opening night of the show. 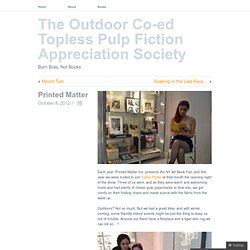 Three of us went, and as they were warm and welcoming hosts and had plenty of classic pulp paperbacks to dive into, we got comfy on their folding chairs and made scarce with the fabric from the waist up. The Outdoor Co-ed Topless Pulp Fiction Appreciation Society. Saturday Morning Breakfast Cereal. October 16, 2009 Couple things, peeps! 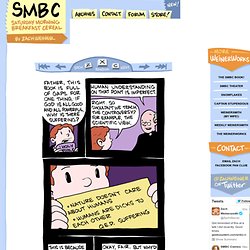 First, San Francisco Area-ans, come see me at APE! ALSO, Felicity Doyle, whom you may know as one of our reporters in the Superman sketch, has a food review blog. It's called Felicious Food. If you're an LA food nerd, it'll come in handy. (Oh, and the new shirt has already outsold one of my oldest shirt designs. Discuss this comic in the forum.