Best Cool Movies to Watch - A Good Movie to Watch. First off you have to remember it is the same writer as Training Day. 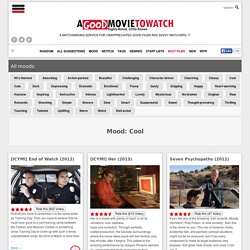 Then you have to believe that he must have gone to a joint training camp between the Taliban and Mexican Cartels or something since Training Day to come up with such a tense, unpredictable script. But End of Watch is more than … More Her is a movie with plenty of heart, in all its variations: love, sadness, hope and confusion. Through perfectly crafted production, the futuristic surroundings where the movie takes place will feel familiar only few minutes after it begins. More If you like any of the following: Irish accents, Woody Harrelson, Pulp Fiction, or dark comedy; then this is the movie for you. More From the director of Drive comes Bronson, the true story of a man who was sentenced to seven years in prison but ended up spending three decades in solitary confinement. More More Snatch strings together multiple plots with a great ensemble cast and turns it into an excellent thriller movie. 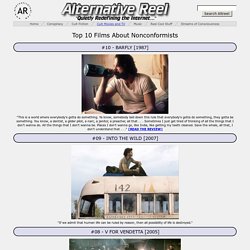 Ya know, somebody laid down this rule that everybody's gotta do something, they gotta be something. You know, a dentist, a glider pilot, a narc, a janitor, a preacher, all that . . . Sometimes I just get tired of thinking of all the things that I don't wanna do. All the things that I don't wanna be. "If we admit that human life can be ruled by reason, then all possibility of life is destroyed. " "Words offer the means to meaning, and for those who will listen, the enunciation of truth. 10 Movies That Could Change Your Understanding Of Life. Every movie has the ability to affect its viewer differently. 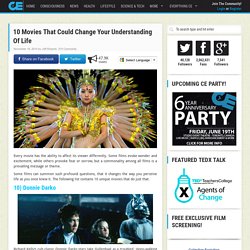 Some films evoke wonder and excitement, while others provoke fear or sorrow, but a commonality among all films is a prevailing message or theme. Some films can summon such profound questions, that it changes the way you perceive life as you once knew it. The following list contains 10 unique movies that do just that. The 20 Best Movies of 2014. 2014 has been a fantastic year for cinema, ranging from the routine spectacles of summer blockbusters, to the independently produced character pieces. 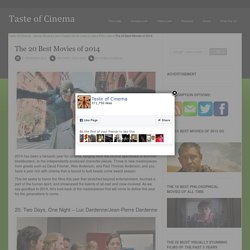 Throw in new masterpieces from greats such as David Fincher, Wes Anderson, and Paul Thomas Anderson, and you have a year rich with cinema that is bound to butt heads come award season. This list seeks to honor the films this year that stretched beyond entertainment, touched a part of the human spirit, and showcased the talents of all cast and crew involved. As we say goodbye to 2014, let’s look back at the masterpieces that will come to define this year for the generations to come. 20. Two Days, One Night – Luc Dardenne/Jean-Pierre Dardenne. Top 100 Tuesday: 100 Best Movies of the Decade - We Are Movie Geeks.

EmailEmail Since we first published our 100 Best Movies of the Decade in 2009, films have continued to get bigger and better. 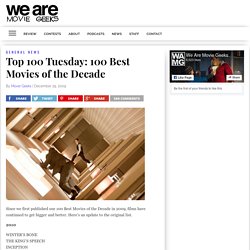 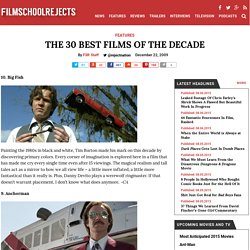 Big Fish Painting the 1980s in black and white, Tim Burton made his mark on this decade by discovering primary colors. Top 100 Tuesday: 100 Best Movies of the Decade - We Are Movie Geeks. The 23 Best Independent Movies of 2014. 2014 has undoubtedly been an incredible year for cinema. 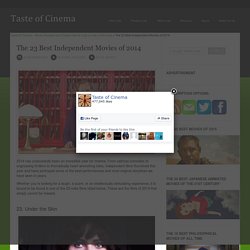 From satirical comedies to engrossing thrillers to thematically heart-wrenching tales, independent films flourished this year and have portrayed some of the best performances and most original storylines we have seen in years. Whether you’re looking for a laugh, a scare, or an intellectually stimulating experience, it is bound to be found in one of the 23 indie films listed below. These are the films of 2014 that simply cannot be missed. 23. Under the Skin With her recent endeavors in sci-fi films, from Her to Lucy, Scarlett Johansson has proven herself to be a highly resilient and successful actress in the genre.

In the film, Johansson embodies an alien predator who has taken the form of a human, using her sexually alluring nature to seduce men. Johansson’s character does this repeatedly, though the reasons for it are never made entirely clear. Empire's 500 Greatest Movies Of All Time. Flickseeker - Discover Movies by Feeling. 300+ Mind Expanding Documentaries. Source: www.diygenius.com | Original Post Date: January 12, 2014 – I watch a lot of documentaries.

I think they are incredible tools for learning and increasing our awareness of important issues. The power of an interesting documentary is that it can open our minds to new possibilities and deepen our understanding of the world. The 30 Best Films of the Decade - Page 2 of 3. 20. 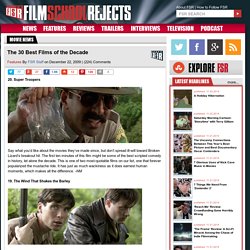 Super Troopers Say what you’d like about the movies they’ve made since, but don’t spread ill-will toward Broken Lizard’s breakout hit. The first ten minutes of this film might be some of the best scripted comedy in history, let alone the decade. Thought provoking + Clever Movies. Gogocinema. TUBE+ Watch full length TV Shows and Movies online for free.