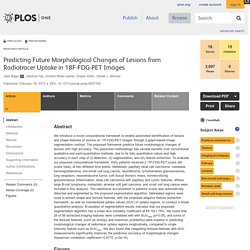 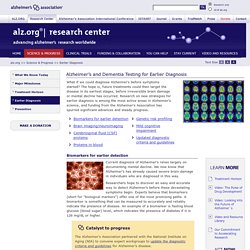 We now know that Alzheimer's has already caused severe brain damage in individuals who are diagnosed in this way. Researchers hope to discover an easy and accurate way to detect Alzheimer's before these devastating symptoms begin. Experts believe that biomarkers (short for "biological markers") offer one of the most promising paths. A biomarker is something that can be measured to accurately and reliably indicate the presence of disease. Fundamentals of Gerontology:Counseling the Elderly and their Families. Screening for Dementia The assessment batteries typically used to detect organic disorders in younger adults (e.g., the Halstead-Reitan, the Wechsler Memory Scale--Revised, and the WAIS-R) now have norms that extend into the young-old years, with some norms available for the old-old on some tests (see, for example, LaRue, 1992; Storandt & VandenBos, 1994). 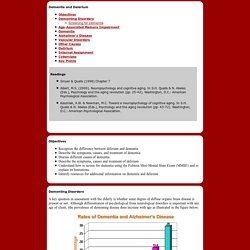 For example, an inverse relationship was found between MMSE scores and age. Memory & Brain Scan Tests Identified for Best Predicting Alzheimer’s. New research has identified the memory and brain scan tests that appear to predict best whether a person with cognitive problems might develop Alzheimer’s disease. 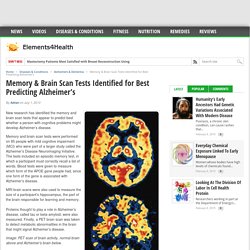 Memory and brain scan tests were performed on 85 people with mild cognitive impairment (MCI) who were part of a larger study called the Alzheimer’s Disease Neuroimaging Initiative. The tests included an episodic memory test, in which a participant must correctly recall a list of words. Blood tests were given to measure which form of the APOE gene people had, since one form of the gene is associated with Alzheimer’s disease. MRI brain scans were also used to measure the size of a participant’s hippocampus, the part of the brain responsible for learning and memory.

Proteins thought to play a role in Alzheimer’s disease, called tau or beta-amyloid, were also measured. Principe du PetScan. MPs warn of dementia delays. A PET scan showing a normal brain (left) compared to that of an Alzheimer's patient Patients with dementia are facing huge delays in their diagnosis and treatment according to a group of MPs and peers. 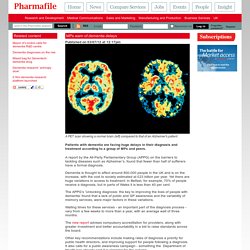 A report by the All-Party Parliamentary Group (APPG) on the barriers to tackling diseases such as Alzheimer’s, found that fewer than half of sufferers have a formal diagnosis. Dementia is thought to affect around 800,000 people in the UK and is on the increase, with the cost to society estimated at £23 billion per year. Yet there are huge variations in access to treatment: in Belfast, for example, 70% of people receive a diagnosis, but in parts of Wales it is less than 40 per cent. The APPG’s ‘Unlocking diagnosis: the key to improving the lives of people with dementia’ found that a lack of public and GP awareness and the variability of memory services, were major factors in these variations. PET scan - National Library of Medicine - PubMed Health. 18F-FDG PET/CT Imaging In Oncology. Neuroinformatics Research Group. Aside from our large funded projects, NRG developers are always busy working on many smaller projects, enhancements, and activities. 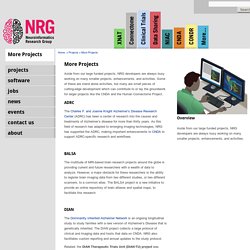 Some of these are stand alone activities, but many are small pieces of cutting-edge development which can contribute to or lay the groundwork for larger projects like the CNDA and the Human Connectome Project. The Charles F. and Joanne Knight Alzheimer’s Disease Research Center (ADRC) has been a center of research into the causes and treatments of Alzheimer’s disease for more than thirty years. As this field of research has adapted to emerging imaging technologies, NRG has supported the ADRC, making important enhancements to CNDA to support ADRC-specific research and workflows. The multitude of MRI-based brain research projects around the globe is providing current and future researchers with a wealth of data to analyze. Related: the DIAN Therapeutic Trials Unit (DIAN-TU) project was spawned from this original DIAN project. Diffuse Optical Tomography Dr.

What is a PET scan? How does a PET scan work? - Medical News Today. A PET scan uses radiation, or nuclear medicine imaging, to produce 3-dimensional, color images of the functional processes within the human body. 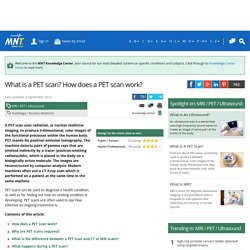 PET stands for positron emission tomography. The machine detects pairs of gamma rays that are emitted indirectly by a tracer (positron-emitting radionuclide), which is placed in the body on a biologically active molecule. The images are reconstructed by computer analysis. Modern machines often use a CT X-ray scan which is performed on a patient at the same time in the same machine. PET scans can be used to diagnose a health condition, as well as for finding out how an existing condition is developing. You will also see introductions at the end of some sections to any recent developments that have been covered by MNT's news stories.