For which geologic period are no fossils found in New York State? Ordovician Silurian Devonian Permian Locate the geologic time scale in the Earth Science Reference Tables. At the right-hand side of the chart the New York State rock record is illustrated. 2. The intrusion of A the fault along line B the fold at C the deposition of gravel at D Since intrusion A cuts across all the other rock layers, it must be younger than the other rock layers. 3. 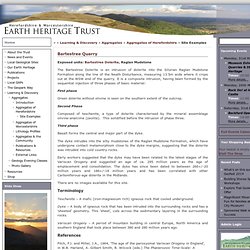 There are two rock formations present in the quarry: 12m of the Coalbrookdale Formation which forms the basal units, and 25m of the Much Wenlock Limestone Formation which sits above. The boundary between the two units represents a rapid decrease in sea levels in the area The Coalbrookdale is characterised by olive grey to dark blue-grey silty mudstones with some calcareous siltstones and contain calcareous nodules and impersistent nodular calcareous beds. The overlying Much Wenlock Formation is characterised by pale grey nodular to thinly bedded limestones. GeoGuessr - Let's explore the world! 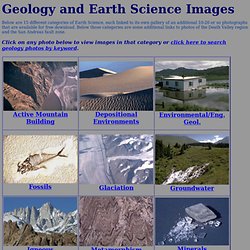 Click here for Structural Geology Images and diagrams Click here for Geologic Contacts Click here for some Photos of the Columbia River Basalt Group. Photos of Asbestos ...the mineral chrysotilePhotos of Seismites, indications of past earthquakesPhotos of Angle of Repose. Planetary Science. Visualizations. Exploring Earth Visualizations. Videos > Catalog / Earth Science. Visual Dictionary Online > EARTH. Various sciences that study the Earth, either as a physical entity, or as a living environment for plants, animals and human beings. 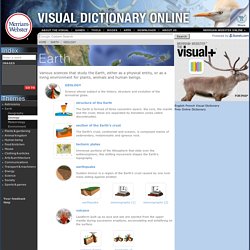 Science whose subject is the history, structure and evolution of the terrestrial globe. The Earth is formed of three concentric layers: the core, the mantle and the crust; these are separated by transition zones called discontinuities. The Earth’s crust, continental and oceanic, is composed mainly of sedimentary, metamorphic and igneous rock. Immense portions of the lithosphere that slide over the asthenosphere; this shifting movement shapes the Earth’s topography. Sudden tremor in a region of the Earth’s crust caused by one rock mass sliding against another. Landform built up as lava and ash are ejected from the upper mantle during successive eruptions, accumulating and solidifying on the surface. Elevated landform characterized by steep slopes; it is usually part of a chain.