A Beginner's Guide to Bonsai Trees - Arborist Now. For those of you who love trees, but simply don’t have the space for them in your yard, have you ever considered bonsai trees? 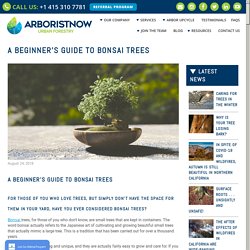 Bonsai trees, for those of you who don’t know, are small trees that are kept in containers. The word bonsai actually refers to the Japanese art of cultivating and growing beautiful small trees that actually mimic a large tree. This is a tradition that has been carried out for over a thousand years. These trees look amazing and unique, and they are actually fairly easy to grow and care for. Things To Avoid When Growing Your Bonsai Tree. Growing bonsai trees is not easy, yet it can be fun and challenging at the same time. 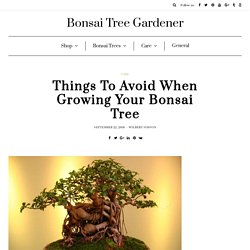 However, there are things that some growers miss doing or things they do that can result to sickness or death of their bonsai trees. In this tutorial, we will discuss the most common problems bonsai growers face and the solution for them. We will be covering the following topics: Watering Issues: Underwatering and OverwateringBonsai Trees Planted in the Wrong EnvironmentUsing the Wrong Type of SoilNot Feeding or Using FertilizerChoosing the Wrong Bonsai PotOver Pruning Bonsai TreesBonsai Not Getting Enough SunlightUsing the Wrong Bonsai Tools 1) Watering Issues: Underwatering and Overwatering. Repotting Bonsai, how to repot your tree - Bonsai Empire. How to repot your Bonsai tree To prevent your Bonsai from being pot-bound and ultimately starving to death, It's crucial to repot, or transplant regularly. 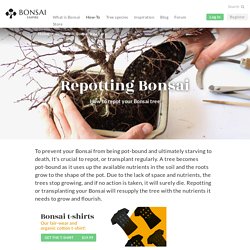 A tree becomes pot-bound as it uses up the available nutrients in the soil and the roots grow to the shape of the pot. Due to the lack of space and nutrients, the trees stop growing, and if no action is taken, it will surely die. Repotting or transplanting your Bonsai will resupply the tree with the nutrients it needs to grow and flourish. Can You Germinate Dry Japanese Maple Seeds and When is the Best Time to Pick Them? Growing Japanese Maples. NFT Hydroponics Basil Perpetual Grow Guide. Walnut Genus: Common Trees of the Pacific Northwest. OregonForests. Pictures of Common Weed Leaves climbers. Down Garden Services Weed Removal Weed Prevention Weedkillers Invasive Garden Plants Weed Seedlings Herbal Remedies Follow these links to other galleries of leaf pictures of plants with different growth habits: Weeds Weed Removal Weed Prevention Weedkillers. 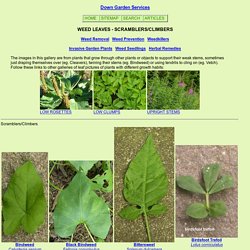 Portland Plant List 2016 Update Final2. GSS WeedGuide LoRes JUNE2017. DIY Fairy House Planter Project. Pinterest. Fairy houses and fairy wings for your dolls. After we busted out a couple of the "fairy house bottles" from the recycling to make the mermaid kingdom yesterday, I thought that we should do the others while the kids were excited by it. 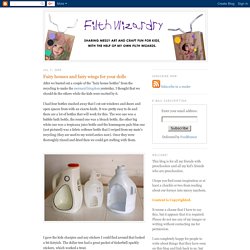 I had four bottles stashed away that I cut out windows and doors and open spaces from with an exacto knife. It was pretty easy to do and there are a lot of bottles that will work for this. The wee one was a bubble bath bottle, the round one was a bleach bottle, the other big white one was a tropicana juice bottle and the humungous pale blue one (not pictured) was a fabric softener bottle that I swiped from my mate's recycling (they are used to my weird antics now). Once they were thoroughly rinsed and dried then we could get crafting with them. I gave the kids sharpies and any stickers I could find around that looked a bit fairyish.

I drew out some butterfly wings at about the right size for the polly pocket dolls. We made four of these little polly pocket fairies. How to infuse herbs into oil: Hot and Cold Method - Natural Herbal Living Magazine. Once you have chosen the herbs and oils that are beneficial for the project you have in mind, it is time to infuse the herbs into the oils. 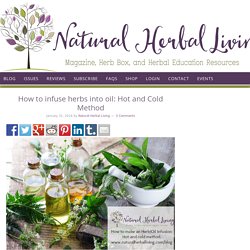 How to infuse herbs into oil: Hot and Cold Method There are two primary methods of infusing herbs into a fixed oil. The hot oil infusion method is quick and relatively painless, and the cold infusion method which takes 6-8 weeks. DIY Herbal-Infused Oils. Botanical oils: A simple how-to for a cold-infused herbal oil. An infused oil is an oil that has been filled with the properties of one or more herbs. 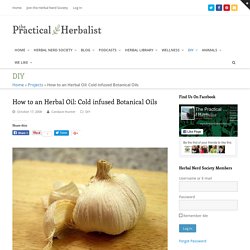 Infused oils make great massage oils and are often used as the basis for healing salves. Some herbal infused oils, like garlic or cayenne, can be used for cooking, too. There are two basic ways to create an infused oil, the cold method or the hot method. The cold method, which is really done at room temperature, takes time but is relatively easy and requires little attention while the oil is soaking in the herb’s qualities.

The hot method requires a direct heat source and close attention but is ready for use within a relatively short period of time. Infused oils can be made from fresh or dried herbs. For more information on using heat to infuse an herbal oil, see The Practical Herbalist general procedure for making a heat-infused herbal oil. Any oil can be infused with an herb. This is a basic procedure, not a recipe. Cornmeal: The Easiest Way to Get Rid of Ants. If ants are marching two-by-two into your kitchen, you’ve probably tried every trick in the book to make them go away. 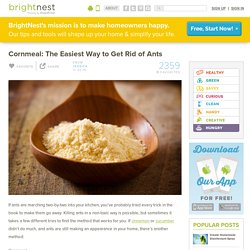 Killing ants in a non-toxic way is possible, but sometimes it takes a few different tries to find the method that works for you. If cinnamon or cucumber didn’t do much, and ants are still making an appearance in your home, there’s another method: Cornmeal. Unlike cucumber, cornmeal doesn’t just scare ants away.

How to Attract Ladybugs to Your Garden. Build a Bug Hotel - Garden Therapy. A bug hotel is part garden art and part winter habitat for beneficial insects, the garden army that helps to keep the bad bugs under control. 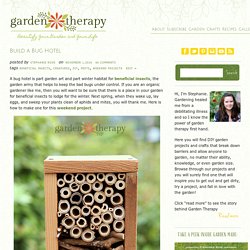 Vegetables to Grow in Shady Gardens - bitesizegardening.com. Graphic from alternative-energy-gardning.blogspot.com Want to grow veggies, but don’t have a sunny enough spot? 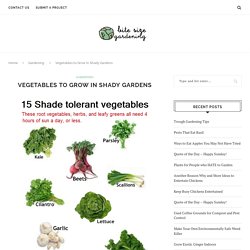 Worry not, shady-yard gardener, there are several vegetables that don’t require a ton of sunshine to thrive. Some gardeners plant these between their tomatoes or corn, but if you have a spot with four hours of sun (or less) you can successfully grow these kitchen favorites. Make a Lady Bug Hotel. How To Make a Ladybug Feeder & Attract Them to Your Garden. Last week, I showed how you can make natural pesticides for your plants. While these sprays pose less risk than the toxic ones, they also rid your plant of beneficial insects like the ladybug. How to Attract Butterflies to Your Garden. Having a garden is one of life’s greatest pleasures. Tangible benefits can be gained from interacting directly with the natural world, including healing faster after an illness and improving kids’ creativity and learning. Just think about how the scent of an aster or the feel of its petals completely changes your mood!

In Seoul you can walk among 250 tree species where cars used to speed on the highway. Seoullo 7017 is a new pedestrian walkway built on what was an old and dangerous overpass in Seoul. A symbol of the city’s green transformation. The project is similar to New York’s famous High Line constructed on the railway that once connected the Meat Market to Midtown. But in the case of Seoullo 7017 in South Korea’s capital Seoul, a walkway has been constructed on an overpass dating back to 1970 where cars once sped along, and where today people can wander and enjoy the revitalised area.

The Seoullo 7017 project The city of Seoul isn’t known for its beauty and aesthetics. The highway over the tracks that lead into Seoul train station was closed in 2006 as it was found to have serious safety problems, and it was likely to be demolished. How-to-control-aphids-control.jpg (JPEG Image, 490 × 634 pixels)

10 Tips to Control Aphids Plus a Flowchart Action Plan. Help! I Have Aphids On My Plants Right Now! 113803. Gardenerd: Organic Edible Gardening. Here’s a new question that came in this week: “Dear Gardenerd, How do I keep the pesky ants off of my precious artichokes? I soaked the ones I harvested and still found some. . . ugh! The Gardeners Anonymous Blog: Ants On My Plants: Why Ants on Plants Are Bad And What To Do About It. Square Foot Planting Guide. Planning to do a square foot garden this year?

Edit Article Three Methods:Germinating SeedsTransplantingDaily Care Lavender is a beautiful, fragrant bush that produces purple, white, and/or yellow flowers, depending on the specific variety. Most gardeners usually propagate lavender from cuttings, but the plant can also be grown from seed.