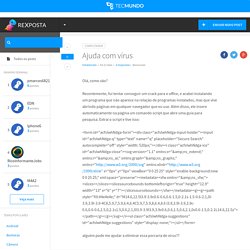 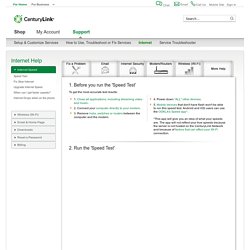 The 'target speed' is 80% of your 'download/upload speed'. This is because 20% of the speed is used for protocol overhead. Testing should be done with 1 device connected directly to your modem using an Ethernet connection. All other devices should be disconnected and powered off during testing. Great! Your wired speed test is GOOD. Now you can connect or power on your other devices. You can also look at tricks that will improve your wireless connection. Wireless Users. Speed tests performed over a wireless connection don't reflect your full connection speed. With that in mind, we can show you some tricks to improve your wireless connection. * Not all speeds are available in all areas. ^ Tests run over a Wi-Fi connection may not represent your full broadband connection speeds.

Speedtest.net by Ookla - The Global Broadband Speed Test. YouTube Video Playback Stops / Pauses / Buffers. What to Do: Ensure no other users or applications are utilizing bandwidth on your network (e.g. other electronics streaming content, performing downloads, etc). 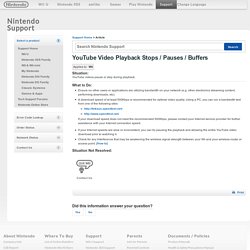 A download speed of at least 500Kbps is recommended for optimal video quality. Using a PC, you can run a bandwidth test from one of the following sites: If your download speed does not meet the recommended 500Kbps, please contact your Internet service provider for further assistance with your Internet connection speed. If your Internet speeds are slow or inconsistent, you can try pausing the playback and allowing the entire YouTube video download prior to watching it. Software and Firmware Downloads. WD Learning Center - WD My Cloud - Downloads. My Cloud is not showing up on the network - My Cloud - WD Community.

Search Tips & Tricks – Inside Search – Google. Soap homepage. Soap is a pointing device based on hardware found in a mouse, yet works in mid-air. 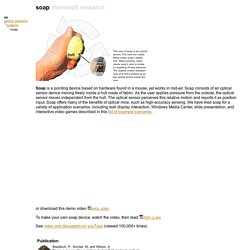 Soap consists of an optical sensor device moving freely inside a hull made of fabric. As the user applies pressure from the outside, the optical sensor moves independent from the hull. The optical sensor perceives this relative motion and reports it as position input. Soap offers many of the benefits of optical mice, such as high-accuracy sensing. We have tried soap for a variety of application scenarios, including wall display interaction, Windows Media Center, slide presentation, and interactive video games described in this list of example scenarios. or download this demo video To make your own soap device, watch the video, then read.

How does a computer mouse work? - Explain that Stuff. Advertisement by Chris Woodford. 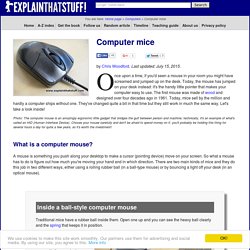 Last updated: July 15, 2015. Once upon a time, if you'd seen a mouse in your room you might have screamed and jumped up on the desk. Today, the mouse has jumped on your desk instead: it's the handy little pointer that makes your computer easy to use. The first mouse was made of wood and designed over four decades ago in 1961. Photo: The computer mouse is an amazingly ergonomic little gadget that bridges the gulf between person and machine; technically, it's an example of what's called an HID (Human Interface Device).

What is a computer mouse? A mouse is something you push along your desktop to make a cursor (pointing device) move on your screen. Inside a ball-style computer mouse Traditional mice have a rubber ball inside them. Here's the inside of an old-style Logitech ball mouse: Vsnp2std.exe Windows process - What is it? Shortcut keys Microsoft Word. WD Product Update. My Book Essential Hard Drive 2TB USB3.0 not geting detected. PhotoRec. Latest stable version 7.0 April 18, 2015 PhotoRec, Digital Picture and File Recovery PhotoRec is file data recovery software designed to recover lost files including video, documents and archives from hard disks, CD-ROMs, and lost pictures (thus the Photo Recovery name) from digital camera memory. 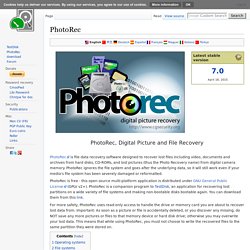 PhotoRec ignores the file system and goes after the underlying data, so it will still work even if your media's file system has been severely damaged or reformatted. PhotoRec is free - this open source multi-platform application is distributed under GNU General Public License (GPLV v2+). For more safety, PhotoRec uses read-only access to handle the drive or memory card you are about to recover lost data from. Operating systems PhotoRec runs under DOS/Windows 9x Windows NT 4/2000/XP/2003/Vista/2008/7/10 Linux FreeBSD, NetBSD, OpenBSD Sun Solaris Mac OS X and can be compiled on almost every Unix system. Download TestDisk & PhotoRec File systems.