The Obscure Egyptian God Medjed and His Bizarre Afterlife on the Japanese Internet. The Book of the Dead is an ancient Egyptian text describing the passage of departed souls into the afterlife and listing the spells they must recite to proceed through Duat (the Realm of the Dead). 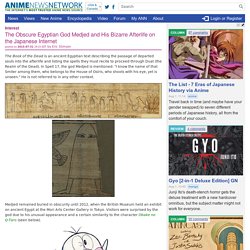 In Spell 17, the god Medjed is mentioned: "I know the name of that Smiter among them, who belongs to the House of Osiris, who shoots with his eye, yet is unseen. " He is not referred to in any other context. Medjed remained buried in obscurity until 2012, when the British Museum held an exhibit on ancient Egypt at the Mori Arts Center Gallery in Tokyo.

Visitors were surprised by the god due to his unusual appearance and a certain similarity to the character Obake no Q-Taro (seen below). Japanese netizens quickly found Medjed to be cute, and began creating fan art of him. By 2013, Medjed had become a full-fledged meme, and took on a life of his own, as memes often do. The boy is creeped out by Medjed's gaze. Medjed zaps a cockroach to protect Osiris. Anicent Egyption inspired Cartoon. Naomi Campbell’s Eye of Horus House – By Luis de Garrido. EmailEmail A luxurious and spacious summer mansion, shaped like the ancient Egyptian Eye of Horus, is designed by Spanish architect Luis de Garrido. 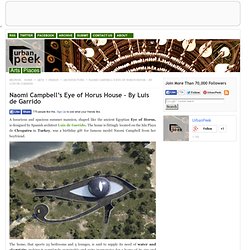 The home is fittingly located on the Isla Playa de Cleopatra in Turkey, was a birthday gift for famous model Naomi Campbell from her boyfriend. The home, that sports 25 bedrooms and 5 lounges, is said to supply its need of water and electricity making it completely sustainable and quite inexpensive for a home of its size and technology. The eye’s black outline is made up of photovoltaic panels, which work in combination with a geothermal system to provide all the home’s energy needs. Rainwater is harvested, and an on-site biological system treats waste water. Although the greenhouse effect promotes natural heating, certain measures – such as landscaping and tilted louvers – ensure that the heat is bearable during the summer time. L'Egypte en images vue par... - Egypte de F1ADC. Exhibitions to Lend. The Dahesh Museum of Art has a rich tradition of organizing exhibitions centered on its extensive permanent collection of 19th-century academic art. 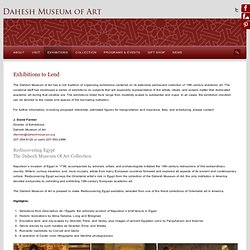 The curatorial staff has developed a series of exhibitions on subjects that are especially representative of the artists, ideals, and subject matter that dominated academic art during that creative era. The exhibitions listed here range from modestly scaled to substantial and major. In all cases, the exhibition checklist can be tailored to the needs and spaces of the borrowing institution. For further information, including proposed checklists, estimated figures for transportation and insurance, fees, and scheduling, please contact: J. Rediscovering Egypt The Dahesh Museum Of Art Collection. Fred Wilson: Were Ancient Egyptians Black, White or Brown? Discuss. Brooklyn, NEW YORK—Fred Wilson uses art objects to raise controversial issues. 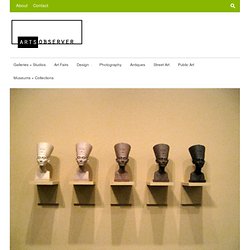 Here he paints five identical, found heads labeled “Nefert-ite” a range of flesh tones. The installation asks, but does not answer, questions about ancient Egyptian identity, leaving it to viewers to discuss and debate. The exhibit copy quotes Wilson on his approach: “I use beauty as a way of helping people to receive difficult or upsetting ideas. The topical issues are merely a vehicle for making one aware of one’s own perceptual shift—which is the real thrill.” Born in the Bronx, Wilson lives and works in New York. Wilson was commissioned for a public art project in Indianapolis, Ind., that was recently canceled. because the community wasn’t comfortable the image of a freed slave serving as an inspirational symbol. In this video produced by PBS’s “Art21,” Wilson explains how he works. All photos by Arts Observer “Grey Area (Brown Version),” 1993 (paint, plaster and wood).

Egyptomanie & goût pour l'Antique on Pinterest. Yale Peabody Museum. THE GOODS: GOMDULLA THE LIVING PHAROAH. The above depiction of Gomdulla, the living Pharoah was drawn on sketchbook paper with pencil, pen and brush pens. 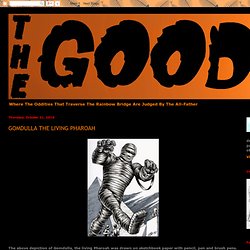 (Notice that Kirby or his inker left off one of the fingers on Gomdulla's right hand or did they put an extra on his left?) In JOURNEY INTO MYSTERY #61, we first meet the gaze of Gomdulla, a monstrous mummy that is on display in an Egyptian Museum. Two children are playing and accidentally trip a hidden stud on his foot. The gigantic mummy is then brought back to life, smashing his way out of the museum. An agent of Interpol is sent to investigate the worshippers of Gomdulla where he discovers the cult’s hide-out and attempts to arrest their leader. There were two other mummy characters who appeared at Atlas/Marvel in that general time period. 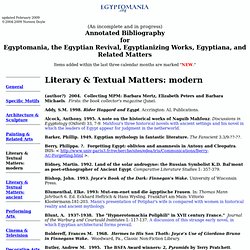