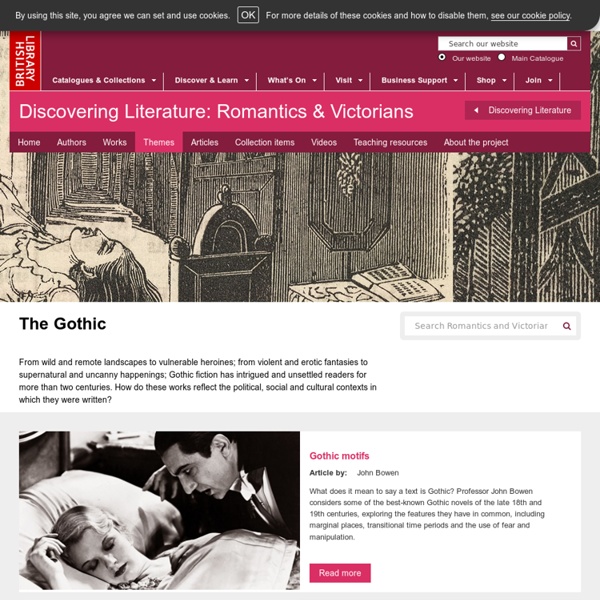 Dracula: the Victorian vampire The vampire is a complicated creature: caught between life and death, at once alluring and horrifying. Greg Buzwell considers the way the novel reflects the fears that haunted late 19th-century society – fears of immigration, sexual promiscuity and moral degeneration. The vampire has always been a contradictory figure: on the one hand a repellent blood-sucking creature crawling from the grave, and, on the other, a strangely alluring representation of nocturnal glamour and potent sexuality. The very concept of vampirism horrifies and fascinates in seemingly equal measure, and much of this perverse duality stems from the most famous vampire novel of them all – Bram Stoker’s Dracula, first published in 1897. First edition of Dracula

Elements of the Gothic Novel Robert Harris Version Date: June 15, 2015 The gothic novel was invented almost single-handedly by Horace Walpole, whose The Castle of Otranto (1764) contains essentially all the elements that constitute the genre. Walpole's novel was imitated not only in the eighteenth century and not only in the novel form, but it has influenced the novel, the short story, poetry, and even film making up to the present day. Gothic elements include the following: Bram Stoker's Dracula: a review from 1897 Today marks the centenary of the death of Bram Stoker, and commemorations of the Irish author's life and career will undoubtedly focus on Dracula, his most famous work. An entire industry has evolved around Stoker and his deathless novel, with the author often being hailed as the father of the modern vampire novel which abounds today. Yet upon its publication in 1897, the Manchester Guardian was less than enthusiastic about the future of the horror novel - although praising Stoker's powers as an author, the reviewer regretfully concluded that it was 'an artistic mistake to fill a whole volume with horrors.' … we have a small favour to ask. More people are reading the Guardian than ever but advertising revenues across the media are falling fast. And unlike many news organisations, we haven’t put up a paywall – we want to keep our journalism as open as we can.

Conventions of the Gothic Genre There are a number of techniques, devices and conventions common to a great deal of Gothic literature: WEATHER: used in a number of ways and forms, some of these being: Mist - This convention in Gothic Literature is often used to obscure objects (this can be related to the sublime) by reducing visibility or to prelude the insertion of a terrifying person or thing; Storms - These frequently accompany important events. Flashes of lightening accompany revelation; thunder and downpours prefigure the appearance of a character or the beginning of a significant event; Sunlight - represents goodness and pleasure; it also has the power to bestow these upon characters.THE SUBLIME: The definition of this key term has long been a contested term, but the idea of the sublime is essential to an understanding of Gothic poetics and, especially, the attempt to defend or justify the literature of terror. This of course is a selection of only a few elements of a novel, and no text is this predictable.

Blackalicious – Alphabet Aerobics Lyrics [Intro: Female Voice](Now it's time for our wrap upLet's give it everything we've gotReady? Begin) Dracula by Bram Stoker – review The latest generation of his monstrous progeny might have been something of a disappointment to Bram Stoker's Dracula, but the extent to which he has infected our cultural imagination must surely have exceeded even his wildest dreams. Narrated through a collection of diary entries and letters, Dracula tells the story of a young lawyer sent to manage the affairs of a mysterious Romanian count, only to unleash an evil which preys on those he holds dearest, until the forces of good rally to vanquish it once more. Twilight's anaemic adolescent bloodsuckers look paler than ever next to the primal horror of Stoker's 1897 creation: a ruby-lipped ancient who corrupts the flower of Victorian womanhood, and threatens the heart of the empire itself. Stoker's tale fuses folklore and myth with scientific rationalism, psychiatry and anthropology in a manner that resembles that other great gothic creation, Frankenstein. … we have a small favour to ask.

Gothic motifs What does it mean to say a text is Gothic? Professor John Bowen considers some of the best-known Gothic novels of the late 18th and 19th centuries, exploring the features they have in common, including marginal places, transitional time periods and the use of fear and manipulation. Professor John Bowen discusses key motifs in Gothic novels , including the uncanny, the sublime and the supernatural.

Webquest: Bonfire Night By Gabrielle Jones This webquest by Gabrielle Jones includes activities about the history of Bonfire Night and the traditions which are practised today. Activity 1: Warmer Bonfire Night is a British tradition that is celebrated every year on 5 November. It is also known as Guy Fawkes' Night. Helen Simpson on Angela Carter's Bloody Chamber The Bloody Chamber is often wrongly described as a group of traditional fairy tales given a subversive feminist twist. In fact, these are new stories, not re-tellings. As Angela Carter made clear, "My intention was not to do 'versions' or, as the American edition of the book said, horribly, 'adult' fairy tales, but to extract the latent content from the traditional stories and to use it as the beginnings of new stories."