John Burningham «Cannonball Simp» — Картинки и разговоры. Academe’s Extinction Event: Failure, Whiskey, and Professional Collapse at the MLA. MLA In-Text Citations: The Basics. Summary: MLA (Modern Language Association) style is most commonly used to write papers and cite sources within the liberal arts and humanities. This resource, updated to reflect the MLA Handbook (8th ed.), offers examples for the general format of MLA research papers, in-text citations, endnotes/footnotes, and the Works Cited page. Guidelines for referring to the works of others in your text using MLA style are covered throughout the MLA Handbook and in chapter 7 of the MLA Style Manual. Both books provide extensive examples, so it's a good idea to consult them if you want to become even more familiar with MLA guidelines or if you have a particular reference question. Basic in-text citation rules In MLA Style, referring to the works of others in your text is done using parenthetical citations. 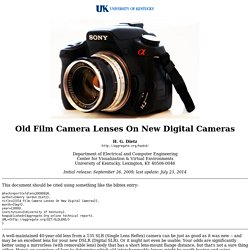 G. Department of Electrical and Computer Engineering Center for Visualization & Virtual Environments University of Kentucky, Lexington, KY 40506-0046 Initial release: September 26, 2009; last update: July 23, 2014 This document should be cited using something like the bibtex entry: A well-maintained 40-year-old lens from a 135 SLR (Single Lens Reflex) camera can be just as good as it was new -- and may be an excellent lens for your new DSLR (Digital SLR).

The photo above shows my Sony Alpha A350 with a Mamiya/Sekor 55mm f/1.8 lens mounted using a focus-confirm M42 adapter. Which lens mounts can you use? Different brands of DSLR generally use different types of lens mount -- modifying a lens with an incompatible mount to work on your DSLR probably is a lot more trouble than it's worth. Which mounts are fully compatible? One would naturally think that sticking to lenses made for the same brand of camera as your DSLR would be safe, but that's not always true. Praus Productions, Traditional Photography at its best. Even the ancient Greeks thought their best days were history. The Seated Boxer, Museo delle Terme, Rome. 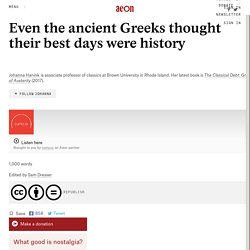 Bradley Weber/Flickr This May, Greece’s parliament passed yet another austerity bill in the hopes of securing more European debt relief. For nearly seven and a half years, creditors have held the country in an economic stranglehold. Along the way, they’ve offered a series of lessons in adding insult to injury. Political cartoons abroad portray Greeks as lazy, corrupt and fiscally reckless. That nostalgia sometimes comes packaged in accusation. That stereotype long predates the current crisis.

Sign up for Aeon’s Newsletter But was there ever such a Greek Golden Age? Sixty-six years after that battle – the same stretch of time that separates us from 1951 – the Athenian playwright Aristophanes entered The Knights in one of his city’s drama festivals. A decade or so after The Knights, another playwright, named Eupolis, staged his own nostalgia-tinged comedy called The Demes. But those glories also weighed on the city’s living. Kyoto June 2013. Browsing Asujiro Ozu by Issue Date. Still Lives. Yumi Sakugawa.

We have found that it takes a lot of time to practice walking slowly......more Turn the blue ache in your heart......more Inside the valley, a small village where all the villagers are invisible....more We used to share so much of ourselves with each other, so much so that our exchanged thoughts and dreams became an energy field of their own....more An invisible tiger containing an invisible jungle where invisible tigers roam... ...more Once upon a time, someone left an ice statue version of me on my door step....more Like a very slow game of ping-pong. ...more Sometimes I imagine a visitor from outer space stepping into my body and mind. ...more This is how we have always known him. ...more These days I don't remember... ...more After a long and bitter argument, Bird Girl and Fox Girl parted ways to start new lives elsewhere. ...more If I can see them, I can name them. ...more. 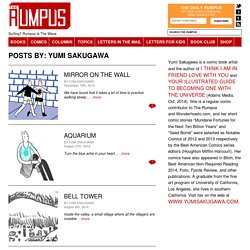 A 150-Year-Old Porcelain Warehouse in Japan Opens for Daily ‘Treasure Hunts’ for Just $45. The Kouraku Kiln was founded in Arita (Saga Prefecture, Japan) in 1865 and has been producing ceramics for the past 150 years. 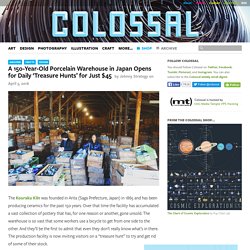 Over that time the facility has accumulated a vast collection of pottery that has, for one reason or another, gone unsold. The warehouse is so vast that some workers use a bicycle to get from one side to the other. And they’ll be the first to admit that even they don’t really know what’s in there. The production facility is now inviting visitors on a “treasure hunt” to try and get rid of some of their stock. Here’s how the treasure hunt works: 읽으면서 보는 그림, 신선미(1980 ~ )의 그림.