Effects of women representation in advertising on. Images of Women in Advertising: a Critical-Cultural Perspective. ABSTRACT - A framework based on cultural advertising research is offered as an alternative approach to study images of women in advertising. 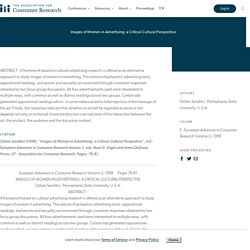 The notions of polysemic advertising texts, oppositional readings, and sexism and sexuality are examined through consumer responses obtained by two focus group discussions. All four advertisements used were interpreted in multiple ways, with common as well as distinct readings across two groups. Certain ads generated oppositional readings which, in some instances led to total rejection of the message of the ad. Finally, the responses indicate that whether an ad will be regarded as sexist or not depends not only on its formal characteristics but is an outcome of the interaction between the ad, the product, the audience and the discursive context. Citation:

Six stereotypes of women in advertising. Images of Women in Advertising: a Critical-Cultural Perspective. ImagesofWomeninAdvertisingMediaAsiaMay2009. Some Indian Advertisements Are Subverting Sexism. Screenshot of the Havells ad which tries to emphasis sexism and reverse roles. 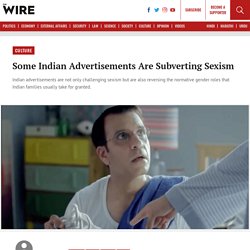 Credit: Havells/Youtube Social marketing in India has become increasingly focused on gender roles, family hierarchy, and traditional marriage practices. Different forms of “femvertising” – female empowerment through socially-focused marketing – has taken hold there in unexpected ways. To illustrate how this is happening, we selected for this article three emblematic advertisements that not only challenge but also reverse the traditionally dominant roles that Indian fathers, sons, and husbands assume with the women in their lives. Role inversion Role inversion highlights men acting “out of script” to improvise a new way of assuming inherited, highly codified familial roles.

Gender Bias in Indian Ads. Considering that gender stereotypes and sexism are the rule in mostly macho movies and regressive TV soaps in our country, one would hope that creative professionals in the advertising field would fight to be the exception. 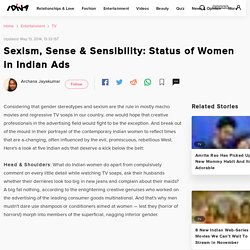 And break out of the mould in their portrayal of the contemporary Indian women to reflect times that are a-changing, often influenced by the evil, promiscuous, rebellious West. Here's a look at five Indian ads that deserve a kick below the belt: Head & Shoulders: What do Indian women do apart from compulsively comment on every little detail while watching TV soaps, ask their husbands whether their derrières look too big in new jeans and complain about their maids?

A big fat nothing, according to the enlightening creative genuises who worked on the advertising of the leading consumer goods multinational. And that's why men mustn't dare use shampoos or conditioners aimed at women — lest they (horror of horrors!) Image courtesy: YouTube screengrab. How do Indian advertisers see women? How Advertisements Perpetuate Sexism & Gender-Based Violence. 4 mins read This article is part of the #GBVInMedia campaign for the 16 Days Of Activism global campaign to end gender-based violence. 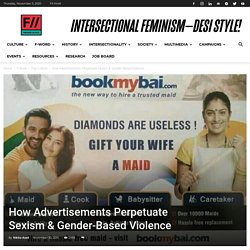 #GBVInMedia campaign analysis how different kind of mainstream media (mis)represents/reports gender-based violence and broadens the conversation from violence against women to violence against people from the queer community, caste-based violence and violence against people with disabilities. Join the campaign here. This year on Diwali, the women of India were reminded of their position in our highly moralistic and ethical society by Bookmybai.com, an online professional site, which advertised that this year all husbands should ‘gift’ their wives, a ‘reliable’, ‘safe’, ‘background verified’ bai (maid) so that the wife ‘never needs to enter the kitchen again.’ 18 Ads That Changed How We Think About Women - Business ... Top 10 Inspiring Commercials Celebrating Women #HerVoiceIsMyVoice. How the portrayal of women in media has changed. Today (8 March) marks International Women’s Day, giving people a chance to celebrate the social, economic, cultural and political achievements of women. 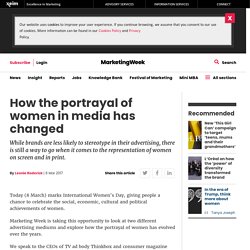 Marketing Week is taking this opportunity to look at two different advertising mediums and explore how the portrayal of women has evolved over the years. We speak to the CEOs of TV ad body Thinkbox and consumer magazine trade body Magnetic to take stock of their progress, where brands are still going wrong and what needs to happen next. Lindsey Clay, CEO, Thinkbox When it comes to TV, we’ve made enormous progress – but it’s coming from a very low base. The Evolution of Women in Advertising. March is National Women’s History Month and the perfect time to look back at the way women have been portrayed in advertising over the years. 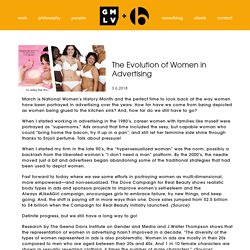 How far have we come from being depicted as women being glued to the kitchen sink? And, how far do we still have to go? When I started working in advertising in the 1980’s, career women with families like myself were portrayed as “supermoms.” Ads around that time included the sexy, but capable woman who could “bring home the bacon, fry it up in a pan”, and still let her feminine side shine through thanks to Enjoli perfume.

Talk about pressure! When I started my firm in the late 90’s, the “hyper-sexualized woman” was the norm, possibly a backlash from the liberated woman’s “I don’t need a man” platform. Fast forward to today where we see some efforts in portraying women as multi-dimensional, more empowered—and non-sexualized. Definite progress, but we still have a long way to go!