The grossly sexist ads we can’t believe exist in the 21st century. Thousands of outraged people signed a Change.org petition calling for the ad to be removed, with founder Charlotte Baring writing: “Protein World is directly targeting individuals, aiming to make them feel physically inferior to the unrealistic body image of the bronzed model, in order to sell their product.

“Perhaps not everyone’s priority is having a ‘beach body’ (by the way, what is that?) , and making somebody feel guilty for not prioritising it by questioning their personal choices is a step too far.” Protein World did not, of course, apologise. Instead, they released a statement which read: “It is a shame that in 2015 there are still a minority who aren’t focusing on celebrating those who aspire to be healthier, fitter and stronger. “We now run Britain’s largest protein facility, selling our products in over 50 countries to more than 300,000 customers. These 45 Shockingly Sexist Vintage Ads Will Make You Glad To Live In 2013. There are times when I feel pretty good about living in today’s society, and this is one of them. 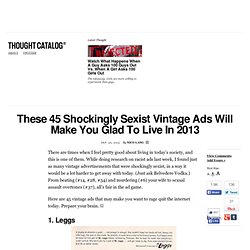 While doing research on racist ads last week, I found just as many vintage advertisements that were shockingly sexist, in a way it would be a lot harder to get away with today. (Just ask Belvedere Vodka.) From beating (#14, #28, #34) and murdering (#6) your wife to sexual assault overtones (#37), all’s fair in the ad game. Here are 45 vintage ads that may make you want to rage quit the internet today. Prepare your brain. 1. Credit/TheVine 2. Credit/DesignTaxi 3. Credit/The Vine. 25 Vintage Ads That Would Be Banned Today. Even though you might deny it, it won’t change the fact that you live in a world created by marketers. 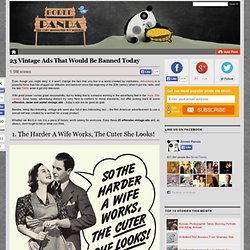 Advertising is a powerful force that has shaped our attitudes and behavior since the beginning of the 20th century when it got into radio, and the late 1940s when it got into television. With great power comes great responsibility, but try telling that to someone working in the advertising field in the early 20th century. Even today, advertising doesn’t try very hard to conform to moral standards, but after looking back at some offensive, racist and sexist vintage ads – today’s ads are as good as gold. Besides being discriminating, vintage ads were also full of lies.

Interesting fact – the first American advertisement to use a sexual sell was created by a woman for a soap product. Whether we like it or not, it is a piece of history worth seeing for everyone. 1. 2. 3. 4. 5. 35 Extremely Sexist Ads That You Should See. We have gathered 35 Extremely Sexist Ads and we think that you shouldn’t miss them under any circumstances.

First, I want to clarify the fact that I’m not a sexist; I believe in equal opportunities and rights for both women and men. And I’m not being politically correct. That’s how I was raised. For some of you these ads are horrible and shocking. Nonetheless, some might even consider them amusing. In yet another unbelievable ad, someone was trying to sell a book called “Why You Should Beat Your Wife“. Nonetheless, if you think that sexist advertisement is a thing of the past, well Madison’s Avenue pots ads will prove you wrong!

P.S. Schlitz 1940s WWII, US Department of State Ketchup ad 1960s Footwear ad 1970s Hoover 1950s Bebnson & Hedges Van Heusen Vacola. Sexism in advertising: ‘They talk about diversity, but they don’t want to change’ In 2017, Victoria Brooks, the vice-president of Bloom, a network for women in advertising and communications, had an idea.

Aware that there were some subjects its members found difficult to discuss even among supportive peers, she decided to set up what would come to be known as the Booth of Truth at the organisation’s inaugural day-long conference in Clerkenwell, London. Inside this enclosed space, women would be able to write down their experiences of such things as discrimination and sexual harassment, safe in the knowledge that they would be anonymous. These anecdotes would then be used at the end of the day as fodder for a panel discussion and advice session that she and the president of Bloom, Stephanie Matthews, would call Confessions Live. The first booth (there have since been others) was inflatable, and resembled an igloo. It contained a sofa, a selection of coloured pens, and a box into which the confession cards could be posted. A lot has changed. Has this surprised her? The dark secret behind sexist advertisements. Gender roles in cleaning ads.