'Russian' airstrikes kill scores in rebel-held north-west Syria. Airstrikes believed to have been carried out by Russian warplanes killed scores of people in the centre of the rebel-held city of Idlib in north-west Syria on Sunday, according to rescue workers and residents. 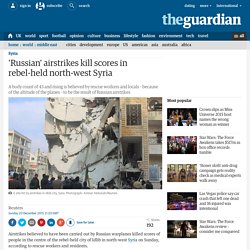 They said at least six strikes had hit a busy marketplace in the heart of the city, along with several government buildings and residential areas. Rescue workers said they had confirmed 43 dead but at least 30 more bodies had been retrieved that had still to be identified. Syrian Coalition Demands Urgent UN Security Council Action to Stop Attacks on Civilians by Assad and Russia. The Syrian Coalition calls upon the UN Security Council to intervene immediately to stop bombing of civilians and hospitals by both Assad and Russia. 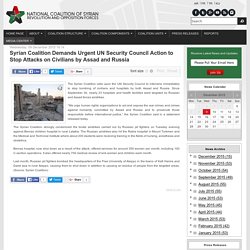 Since September 30, nearly 23 hospitals and health facilities were targeted by Russian and Assad forces airstrikes. “We urge human rights organizations to act and expose the war crimes and crimes against humanity committed by Assad and Russia and to prosecute those responsible before international justice,” the Syrian Coalition said in a statement released today. 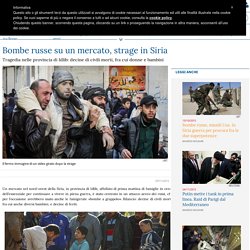 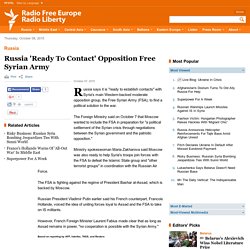 The Foreign Ministry said on October 7 that Moscow wanted to include the FSA in preparation for "a political settlement of the Syrian crisis through negotiations between the Syrian government and the patriotic opposition. " Ministry spokeswoman Maria Zakharova said Moscow was also ready to help Syria's troops join forces with the FSA to defeat the Islamic State group and "other terrorist groups" in coordination with the Russian Air Force. The FSA is fighting against the regime of President Bashar al-Assad, which is backed by Moscow. Russian President Vladimir Putin earlier said his French counterpart, Francois Hollande, voiced the idea of uniting forces loyal to Assad and the FSA to take on IS militants. Looks like Russia's moving things in a positive direction. Compare August 14 with October 1.

Syria's Kurds Are Contemplating an Aleppo Alliance with Assad and Russia - The Washington Institute for Near East Policy. Syrian Adventure Will Cost Russians Dearly. "Has the country run out of poor people? 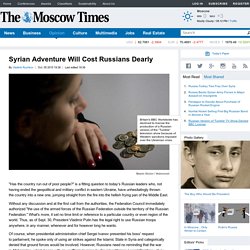 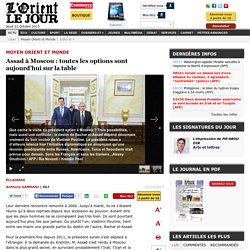 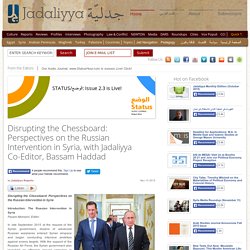 With the support of the Russian Air Force, the Syrian government also launched an offensive ground campaign in conjunction with Hezbollah and Iranian forces to recapture key territories in Hama, Idlib, and Latakia provinces and has more recently set its objectives on regaining Aleppo. Moreover, Iran, Iraq, Russia, and Syria established a joint intelligence center in Baghdad to coordinate military and strategic cooperation across the multiple battlefronts in Syria and Iraq. Despite Russian airstrikes, FSA continues to confront regime. Free Syrian Army fighters of the 101 Division monitor the movements of the forces loyal to Syria's President Bashar al-Assad near al-Tamana town in the southern countryside of Idlib, Syria, Oct. 14, 2015. 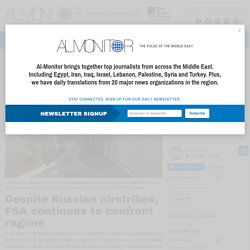 (photo by REUTERS/Khalil Ashawi) Author: Asaad Hanna Posted November 20, 2015 IDLIB, Syria — The Syrian revolution broke out in March 2011 as Syrians demanded freedom and democracy from an authoritarian totalitarian regime. This regime, however, confronted peaceful demonstrations with live ammunition that led to the killing and wounding of several demonstrators back then.

Several months later, the situation in Syria evolved, and the Free Syrian Army (FSA), which was formed in July of 2011, turned into the Syrian revolution’s military arm that confronts the Syrian regime’s military machine. Will Israel, Russia tighten coordination on Syria? An Israeli F-16 fighter jet takes off from Ovda air base, some 40 km (25 miles) north of Eilat, Nov. 25, 2013. 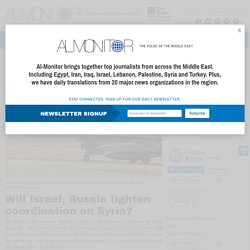 (photo by REUTERS/Amir Cohen) Author: Ben Caspit Posted December 2, 2015 “We [Israel] conduct occasional operations in Syria in order to prevent it from becoming a front against us … and to thwart the transfer of lethal weapons, particularly from Syria to Lebanon,” said Prime Minister Benjamin Netanyahu at a public event in Acre on the afternoon of Dec. 1. It was the first time that any official Israeli source, and the prime minister no less, publicly admitted that Israel was militarily active in Syrian territory.

Summary⎙ Print Israeli security officials debate whether Russian military involvement in Syria will change the balance of power in favor of Israeli interests or against them. Minority report. For a long time, the conventional narrative about the rise of the Islamic State (IS) has been that the jihadist group owes its rise to financial support from Gulf donors. 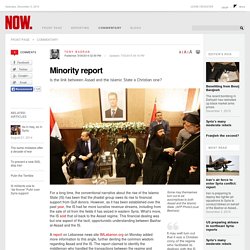 However, as it has been established over the past year, the IS had far more lucrative revenue streams, including from the sale of oil from the fields it has seized in eastern Syria. Russia’s ISIS Money Men Exposed. The claim by Turkish President Erdogan that Putin’s people are profiting from illicit ISIS oil deals is based on a whole raft of allegations, including those of the U.S. Treasury Department. ISTANBUL — In the middle of an angry exchange with Russia, Turkey’s President Recep Tayyip Erdogan is accusing a Christian businessman in Syria with Russian nationality of brokering deals between the Damascus government and the jihadists of the so-called Islamic State.

Erdogan said this week that George Haswani was the “biggest trader in this.” The Turkish president asserted Haswani had dual Syrian and Russian citizenship and was buying oil from ISIS and selling it to the government of Syrian President Bashar al-Assad as well as to international traders. Sukhoi abbattuto dalla Turchia, ecco cosa pensano analisti ed esperti - Formiche.net.

Twitter. Turkey's Erdogan says Russian response to downed jet 'emotional' and 'unfitting' Turkey-Russia. NATO to hold emergency meeting after Turkey downs jet. NATO to hold emergency meeting after Turkey downs jet. China-led SCO troops may follow Russia to Syria. Russia has begun military interventions in Syria, with the possibility of reinforcement by additional troops from SCO member states. Get The Times of Israel's Daily Edition by email and never miss our top stories Free Sign up! In the July summit of the China-led Shanghai Cooperation Organization (SCO), the two core missions were (1) admitting India and Pakistan as full members and (2) how best to counter ISIS and Islamic extremism within member territories. SCO states The territories include Central Asia, AfPak, Kashmir, Russia’s Chechnya and China’s Xinjiang that overlap with ISIS’s aspired caliphate.

ISIS caliphate. Putin’s Syria Gambit Aims at Something Bigger Than Syria - Carnegie Moscow Center - Carnegie Endowment for International Peace. A quarter-century after its withdrawal from Afghanistan, Russia is again at war in a Muslim country outside of the perimeter of its historical empire. Moscow’s intervention in Syria, however, is very different from its past uses of military power, marked by overland invasions and occupations. It is also happening in a regional environment which is new: a Middle East where outside powers, including the United States, are playing a much less dominant role than ever in the last 100 years; and non-state actors like IS are threatening to upend the system of states created after the fall of the Ottoman Empire.

Syria has become, at least for now, Russia’s first U.S. -style war. Russian military aircraft are bombing the enemy from high above, plus the Russian navy is launching cruise missiles from a thousand miles away. Middle East Briefing. Putin’s Plan in Syria and its Chances of Success – What Events on the Ground Tell Us. Siria, ong: "Raid russi su obiettivi non Isis". Mosca: "Colpite più di 50 infrastrutture dello Stato islamico" The West is moving Russia’s way, on Syria and even Ukraine. Meetings between heads of government have become commonplace. But Monday's between Presidents Barack Obama and Vladimir Putin is something special. They have not met formally for nearly two and a half years. The last encounter, planned, for August 2013, was brusquely cancelled by Obama because “there was nothing to talk about”. The main undiscussable issue was Syria. The United States wanted President Assad instantly out; Russia feared chaos without him.