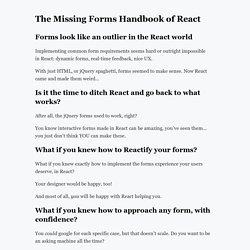 With just HTML, or jQuery spaghetti, forms seemed to make sense. How to build animated microinteractions in React – freeCodeCamp. Microinteractions guide a user through your application. 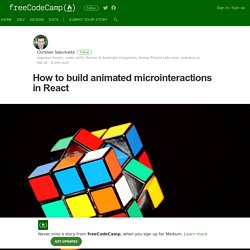 They reinforce your user experience and provide delight. You may have seen some of the slick examples of microinteractions on Dribble or CodePen. But do you know how to build your own library of similar UI widgets? In this article, I’ll focus on animated microinteractions using React, Facebook’s popular, component-oriented UI framework. I’ll build three interactions for a searchbox: open and close the text boxmove to the top of the screenshake (indicating an error) React’s Five Fingers of Death. Master these five concepts, then master React. A few years ago, my friend Sean started telling me how this brand new front-end library called React was going to take over the web. 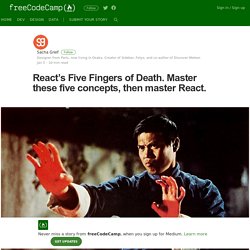 At first I dismissed it as just another framework fad. But then I started hearing about React more and more, to the point where I felt like ignoring it just wasn’t an option anymore. Maybe you’re in the same position I was in: you’ve been hearing about React left and right, but actually sitting down and learning it feels like such a chore. A 5-minute Intro to Styled Components – freeCodeCamp. CSS is weird. 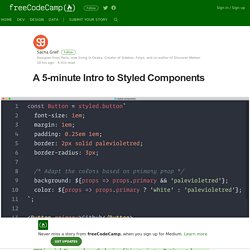 You can learn the basics of it in 15 minutes. But it can take years before you figure out a good way to organize your styles. Part of this is just due to the quirks of the language itself. Out of the box, CSS is quite limited, with no variables, loops, or functions. At the same time, it’s quite permissive in that you can style elements, classes, IDs, or any combination of these. Chaotic Style Sheets As you’ve probably experienced for yourself, this is often a recipe for chaos. That organizational job was left to methodologies like BEM, which — while useful — is entirely optional, and can’t be enforced at the language or tooling level. The New Wave Of CSS Fast forward a couple years, and a new wave of JavaScript-based tools are trying to solve these issues at their root, by changing the way you write CSS. React For Beginners — The best way to learn React. Learn React from the creators of React Router.

Hacking with React – Learn React programming using React Router, Jest and ES6. Surge VS GitHub Pages: How to deploy a create-react-app project. This past week I've been diving into React. 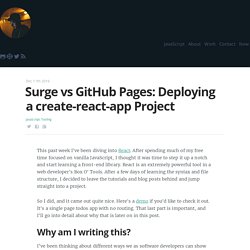 After spending much of my free time focused on vanilla JavaScript, I thought it was time to step it up a notch and start learning a front-end library. React is an extremely powerful tool in a web developer's Box O' Tools. After a few days of learning the syntax and file structure, I decided to leave the tutorials and blog posts behind and jump straight into a project. So I did, and it came out quite nice. Here's a demo if you'd like to check it out. Why am I writing this? I’ve been thinking about different ways we as software developers can show off our skill sets to peers and prospective employers. One of the main reasons I think this is so common is because of all the extra work that tends to go in to deployment.

React Elements VS React Components – freeCodeCamp. A few months ago I had, what I thought, was a simple question that I posted to Twitter. 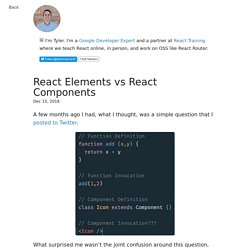 What surprised me wasn’t the joint confusion around this question, but instead was the amount of inaccurate responses I received. Instances / Instantiation Rendering Evaluation Invocation “Using it :)” The primary reason for the confusion is that there’s an often un-talked about abstraction layer between JSX and what’s actually going on in React land.

In order to answer this question, we need to take a deep dive into that abstraction. React’s Five Fingers of Death. Master these five concepts, then master React. A few years ago, my friend Sean started telling me how this brand new front-end library called React was going to take over the web. 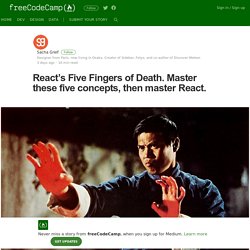 At first I dismissed it as just another framework fad. But then I started hearing about React more and more, to the point where I felt like ignoring it just wasn’t an option anymore. Maybe you’re in the same position I was in: you’ve been hearing about React left and right, but actually sitting down and learning it feels like such a chore. The Road to learn React - RWieruch. I love to teach, even though I am no expert. 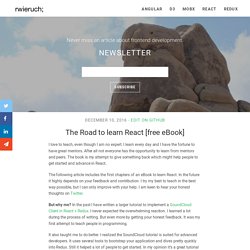 I learn every day and I have the fortune to have great mentors. After all not everyone has the opportunity to learn from mentors and peers. The book is my attempt to give something back which might help people to get started and advance in React. The following article includes the first chapters of an eBook to learn React. In the future it highly depends on your feedback and contribution. But why me? Introduction · react-indepth. At DevelopmentArc® we have a love affair with UI application development. 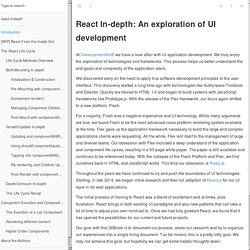 We truly enjoy the exploration of technologies and frameworks. This process helps us better understand the end-goals and complexity of the application stack. We discovered early on the need to apply true software development principles to the user interface. This discovery started a long time ago with technologies like Authorware/Toolbook and Director. Quickly we moved to HTML 1.0 and began to build systems with JavaScript frameworks like Prototype.js. Best Practices for Component State in React.js. When writing React applications, it’s important to know when and when not to use state in components.

In this post, I will review what I consider to be best practices for working with state. TL;DR: If a component does not own a datum, then that datum should not influence it’s state. Store the simplest possible values to describe a component’s state. Leave calculations and conditionals to the render function. These rules obviously have exceptions and should be violated when appropriate; though if you’re able to follow them most of the time, you will find that your components will be easier to break down, the tests will be easier to write, and the entire application will have fewer bugs. Start Using React to Build Web Applications - Course by @joemaddalone. 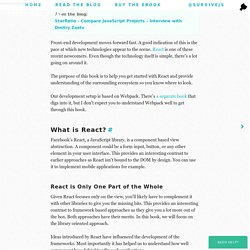 A good indication of this is the pace at which new technologies appear to the scene. React is one of these recent newcomers. Even though the technology itself is simple, there's a lot going on around it. The purpose of this book is to help you get started with React and provide understanding of the surrounding ecosystem so you know where to look. Our development setup is based on Webpack. ReactJS For Stupid People. TL;DR I struggled for a long time trying to understand what React is and how it fits in the application architecture. Alexkuz/react-dock: Resizable dockable react component. React Toolbox. Brillout/awesome-react-components: Catalog of React components / libraries. React-component/slider: React Slider. Reactstrap/reactstrap: Simple React Bootstrap 4 components. Untitled. Blueprint – A React UI toolkit for the Web. Markerikson/react-redux-links: Curated tutorial and resource links I've collected on React, Redux, ES6, and more.

Introducing JSX - React. Edit on GitHub Consider this variable declaration: const element = <h1>Hello, world! </h1>; This funny tag syntax is neither a string nor HTML. It is called JSX, and it is a syntax extension to JavaScript. JSX produces React "elements". Embedding Expressions in JSX # You can embed any JavaScript expression in JSX by wrapping it in curly braces. For example, 2 + 2, user.name, and formatName(user) are all valid expressions: GitHub - petehunt/react-howto: Your guide to the (sometimes overwhelming!) React ecosystem. What good open source projects written in React that I can learn from? Facebookincubator/create-react-app: Create React apps with no build configuration.

React JS Tutorials for Beginners - 1 - Getting Started. Facebookincubator/create-react-app: Create React apps with no build configuration. React.js Essentials - DZone - Refcardz. References Helps to access the DOM nodes. Two-way data bindings with mixins Validating properties. Intro to React (Example) In this tutorial we're going to go through the basics of React. We will render a list of posts that we return via a ajax query. Static Site Generation with React and Webpack. I’ve been dabbling with React for a few months now and using it in several small open source projects to better understand the technology. React’s focus on reusablility, along with the ability to install and require components via npm, provides an elegant way to rapidly build application UI in an efficient and consistent way. Home - React Kung Fu. Thinking in React.

Edit on GitHub React is, in our opinion, the premier way to build big, fast Web apps with JavaScript. It has scaled very well for us at Facebook and Instagram. One of the many great parts of React is how it makes you think about apps as you build them. In this document, we'll walk you through the thought process of building a searchable product data table using React. React Props/State Explained Through Darth Vader’s Hunt for the Rebels. ReactJS: Mastering Best Practices (Tutorial & Blog) Make Your React Components Pretty □ – WalmartLabs – Medium.

At Walmart Labs we do a lot of peer code reviews, which is great because I get to see all sorts of clever ways to write React components from a variety of talented engineers. In this post I’ll share five of my favorite patterns and shortcuts. But first… Why Pretty Code Is Better. LinkedIn Learning: Online Courses for Creative, Technology, Business Skills.

REACT JS TUTORIAL #1 - Reactjs Javascript Introduction & Workspace Setup. React Rally Day 1. FormidableLabs/react-music: Make beats with React! React.js Fundamentals. The modularity of the React ecosystem is extremely powerful for building applications. However, this can be a nightmare when you're first starting out. To even get a React app up and running you need the right combination of React, Webpack, and Babel. In this course we'll start from a blank folder and we'll build an application that encompasses everything you need to get started building production ready apps with React (including Routing and Ajax requests).

Build A Real-Time Twitter Stream with Node and React.js. Introduction Welcome to the second installation of Learning React, a series of articles focused on becoming proficient and effective with Facebook's React library. If you haven't read the first installation, Getting Started and Concepts, it is highly recommended that you do so before proceeding.

Welcome to Formidable. Radium - A React Component Styling Library. Getting Started with Radium To install the stable version of Radium: npm install --save radium. React in 7 Minutes - react Video Tutorial #free. React is all about rendering out some sort of element, say an h1 that says "Hello," and then targeting something on the DOM, like the document body. You can see once we've done that and I hit refresh, that we have "Hello" already rendered out. Core Concepts of React: Components, Props, and State - react Video Tutorial #free. React Lessons - Screencast Video Tutorials.