How Jessica Walsh and Gerry Graf Turn Data Into Art in Their Advertising. CANNES, France—Two well-respected creatives preached the gospel of jumping in, and then letting go, as they described their personal process of making advertising at a Cannes Lions seminar presented by Adobe here Monday morning. 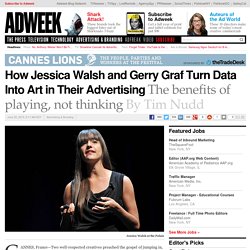 In her first visit to Cannes, Jessica Walsh, a partner at New York design studio Sagmeister & Walsh, took the main stage at the Palais and quoted Picasso—"Every child is an artist. The problem is how to remain an artist once we grow up"—to emphasize the importance of play in the creative process. "I'm a person who loves to play in all aspects of my life, but especially within my work," she said. "I try to approach as much of my work as possible as play, rather than seeing it as a job. Www.australiancurriculum.edu.au/GeneralCapabilities/Pdf/Critical-and-creative-thinking. The Creativity Mindset. I absolutely love all of the emphasis on mindsets these days. 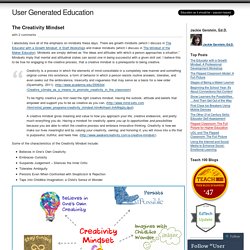 There are growth mindsets (which I discuss in The Educator with a Growth Mindset: A Staff Workshop) and maker mindsets (which I discuss in The Mindset of the Maker Educator). Mindsets are simply defined as “the ideas and attitudes with which a person approaches a situation.” Mindsets imply that mental and attitudinal states can assist one in being successful with a given skill set.

I believe this to be true for engaging in the creative process, that a creative mindset is a prerequisite to being creative. The Creativity Mindset. The Science (and Practice) of Creativity. "Creativity isn't about music and art; it is an attitude to life, one that everybody needs," wrote the University of Winchester's Professor Guy Claxton in the lead-up to the 2014 World Innovation Summit for Education (WISE) dedicated to creativity and education. 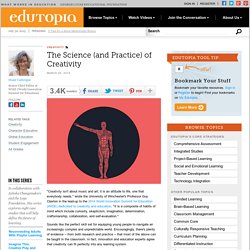 "It is a composite of habits of mind which include curiosity, skepticism, imagination, determination, craftsmanship, collaboration, and self-evaluation. " Sounds like the perfect skill set for equipping young people to navigate an increasingly complex and unpredictable world. Encouragingly, there's plenty of evidence -- from both research and practice -- that most of the above can be taught in the classroom.

In fact, innovation and education experts agree that creativity can fit perfectly into any learning system. But before it can be incorporated broadly in curriculum, it must first be understood. Creativity Starts in the Brain Complex cognitive mechanisms are required to produce creative ideas. Dr. Nurturing Creativity at School 1. The Creativity Mindset. Pete Seeger on Combinatorial Creativity, Originality, Equality, and the Art of Dot-Connecting. By Maria Popova “All of us, we’re links in a chain.” 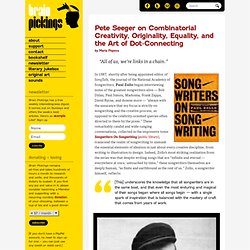 In 1987, shortly after being appointed editor of SongTalk, the journal of the National Academy of Songwriters, Paul Zollo began interviewing some of the greatest songwriters alive — Bob Dylan, Paul Simon, Madonna, Frank Zappa, David Byrne, and dozens more — “always with the assurance that my focus is strictly on songwriting and the creative process, as opposed to the celebrity-oriented queries often directed to them by the press.” These remarkably candid and wide-ranging conversations, collected in the impressive tome Songwriters On Songwriting (public library), transcend the realm of songwriting to unmask the essential elements of ideation in just about every creative discipline, from writing to illustration to design.

Pete Seeger (photograph by Annie Leibovitz) Don’t be so all-fired concerned about being original. I look upon myself and other songwriters as links in a long chain. How Einstein Thought: Why “Combinatory Play” Is the Secret of Genius. Why Creativity Necessitates Eclecticism: Nick Cave’s Influences and Inspirations. Why We Have Our Best Ideas in the Shower: The Science of Creativity - - The Buffer Blog. “I’m not really a creative person”, always struck me as an odd sentence. 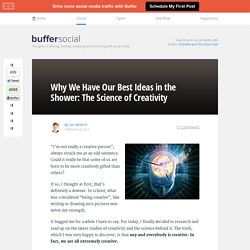 Could it really be that some of us are born to be more creatively gifted than others? If so, I thought at first, that’s definitely a downer. In school, what was considered “being creative”, like writing or drawing nice pictures was never my strength. It bugged me for a while I have to say. For today, I finally decided to research and read up on the latest studies of creativity and the science behind it. And the following science will hopefully prove it, in case you ever had any doubts about your own creativity. “A creative idea will be defined simply as one that is both novel and useful (or influential) in a particular social setting.” – Alice Flaherty This applies to every field Flaherty explains, including programming, business, mathematics together with the more traditional “creative” fields, such as music or drawing.

Our brain on creativity: The example of free-style rap To make it a bit more understandable: Nine of the Best Ways to Boost Creative Thinking. The Difference Between Knowledge and Experience. Do You Have A Wandering Mind? Networked Knowledge and Combinatorial Creativity. By Maria Popova Why creativity is like LEGO, or what Richard Dawkins has to do with Susan Sontag and Gandhi. 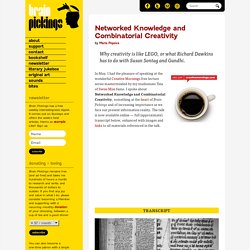 In May, I had the pleasure of speaking at the wonderful Creative Mornings free lecture series masterminded by my studiomate Tina of Swiss Miss fame. I spoke about Networked Knowledge and Combinatorial Creativity, something at the heart of Brain Pickings and of increasing importance as we face our present information reality. The talk is now available online — full (approximate) transcript below, enhanced with images and links to all materials referenced in the talk.

These are pages from the most famous florilegium, completed by Thomas of Ireland in the 14th century. In talking about these medieval manuscripts, Adam Gopnik writes in The New Yorker: Our minds were altered less by books than by index slips.” You may have heard this anecdote. Here’s the same sentiment from iconic designer Paula Scher on the creation of the famous Citi logo: Kind of LEGOs.

And I like this last part. Combinatorial Creativity and the Myth of Originality.